FIX YOU by Christine Bell (Interview/Giveaway)

Been working like crazy? Juggling multiple projects at work? Wonder what it would be like if those were books? Lets get the opinion of our guest today. Welcome Christine Bell!


Lexi: Since you most likely haven’t slept much in the past six months I will start you off with a little wine. We don’t want to make you fall asleep before we can hear about Bash and Olivia.

*glugs all the wine* *holds out glass* Please, sir, can I ‘ave some more?

Lexi: The rest of us do our day jobs, complete deadlines and line up the next project. Sort of like you, only your projects release on March 31st (Fix You), April 28th and May 31st. As a reader may I say, bravo! On the flip side, how crazy do you feel right now with releasing three books in as many months?

Actually, it’s pretty normal for me. O_0 I also released books through Entangled Publishing in August, September, October, November, January and February. So this is pretty much par for the course. I write full time, so it’s not as crazy as it sounds. At least I don’t think it is? Meh, I’m used to it now, so no point in letting up. I will say that I like to be busy and I feel sort of sad inside during non-release months. Like a lost lamb, lol!

Lexi: Your new NA series starts out with Fix You and will follow Bash, Sebastian, and Olivia. Wherever you came up with Bash as a nick name for Sebastian is brilliant! Tell us your favorite thing about this boxer, feel free to be descriptive.

Kudos go to my stepson on the nickname! We watch a show on the CW with a character that goes by that nickname, and he thought that Bash would be a GREAT name for a guy who punches people for a living. And he was right. I fell in love with Bash the second I started writing him. My favorite thing? I think it’s his sense of honor. (Confession time: I almost said his abs). But seriously, he is one of those guys that does what he has to do without complaint, and puts others’ needs before his own. A real man, which is a rare find at such a young age.

Lexi: Men who are in competitive sports have a draw to them. The sculpted muscles help as does the raw confidence. Bash has that and then some rage. Doesn’t everyone have something that needs fixing? To quote some well known trolls, the only way to fix a fixer-upper is with a fixer-upper. Enter Olivia. Who would you say is in more need of fixing, Bash or Olivia?

Wowww. Great question. The concept, initially, was for the reader to feel that Olivia is the one who needs fixing in book one. Her struggles with her abusive ex and her family issues are very much at the forefront there. But in book two when more of Bash’s past starts to come out, it becomes apparent that he is much more affected by the things that happened in his childhood than he lets on. He’s broken for sure, and then the title becomes much more ambiguous. So the answer to your question is that they’re both majorly screwed up (who isn’t?) and if they have any shot of making it work, they need to help fix each other, but also work on fixing themselves as well.

Lexi: They sound like they have a long road...say, about three books worth. When will readers get blurbs on books two and three?

Yep, three books and then the other two McDaniels brothers (Bash has two brothers, Matthias and Reid) will get three books each for their stories as well. As for blurbs for the next two Fix You installements, book three blurb will be released early next month, but you can haz book 2 blurb RIGHT NOW! HERE TIS: 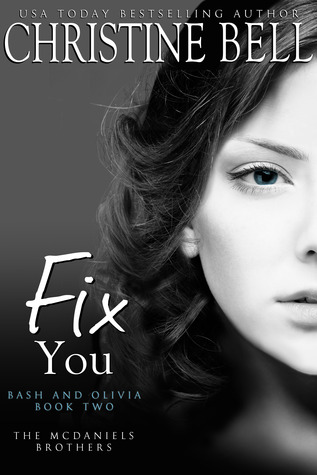 Everything she believed in was a lie…

After facing the fact that her (now ex) boyfriend is an abusive sociopath, and their entire relationship was built on lies, Olivia Beckett is trying to pick up the pieces of her shattered life. If she was the only one suffering for her mistakes, she might be able to handle it. But when she went down, she dragged the one person she never wanted to see hurt down with her…

Bash McDaniels was just weeks away from finally blowing out of his hometown to make it as a boxer and never coming back. Saving Olivia Beckett from her violent boyfriend should’ve been a speed bump at most, but love stopped him in his tracks and now, instead viewing Boston in his rearview mirror, he’s viewing it through prison bars…

Bash was her savior when she needed him most. Now, Olivia has to find a way to repay the favor, knowing all the while that freeing him will mean losing him forever.


Lexi: Congrats on this series, and all the rest of your work projects! Thanks for stopping by Christine!

Thanks so much, I appreciate you having me!

FIX YOU is part one in the new adult McDaniels Brothers serials from USA TODAY Bestselling Author, Christine Bell. Fans of Monica Murphy, Jen McLaughlin, and H.M. Ward will be seduced by Bash and Olivia's story and will look forward to a new installment in this ongoing family saga every month!

Olivia Beckett’s once-charmed life is falling apart. Her family is about to lose everything, and she has almost no chance of continuing her college education. She can't even seek solace from her high school sweetheart. He's changed. She doesn't recognize the boy she used to know— his violent behavior is escalating and it scares the hell out of her. Her whole world is crumbling, and she has no one to turn to……

Sebastian “Bash” McDaniels is an up and comer in the boxing world working nights at the local college bar until he can land the fight of his dreams that will get him the hell out of Boston and away from his family's tragic past. He’s weeks from his goal when Olivia Beckett comes tumbling into his life in a flash of silky dark hair and haunted eyes. When he saves her from a potentially brutal beating, they begin to grow close, but Olivia's ex isn’t ready to let her go so easily.

Bash can't bring himself to walk away, but fixing Olivia just might leave him broken…

Christine Bell is the USA Today bestselling author of contemporary romances, and one half of the happiest couple in the world. She doesn't like clowns or bugs (except ladybugs, on account of their cute outfits), but loves movies, football, and playing Texas Hold 'Em. Writing is her passion, but if she had to pick another occupation, she’d be a wizard. She loves writing fun, sexy romance and deep, emotional new adult novels, but also hopes to one day publish something her dad can read without wanting to dig his eyes out with rusty spoons. Find out more at http://christine-bell.com/


Tour Giveaway:
A $50 e-giftcard to Amazon or Barnes & Noble (winner’s choice, open internationally) and an opportunity to have a character named after the winner in serial #3 of The McDaniels Brothers series!