I'm so sad to say goodbye to Laura Kaye's Hearts of the Anemoi series but she couldn't have wrapped it up more beautifully then she did. Please give a warm welcome to Laura today joining us with her new release of EAST OF ECSTASY!


I’m super excited to be back at Reading Between the Wines today to celebrate the release of East of Ecstasy, the last book in my Greek-mythology-inspired Hearts of the Anemoi series. This blog has been a long-standing supporter of this series so I couldn’t imagine wrapping it up without dropping in one last time to talk about the Anemoi!

This last book is the story of Devlin Eston, heir to the East Wind and outcast among his own divine family. A survivor of abuse, Devlin feels unworthy of the most basic kinds of care and affection and blames himself for the harm his father did to others. He literally has nowhere to belong…until he meets heroine Annalise Fallston. Their relationship was one of the sweetest and most heart-wrenching I’ve written, because at the start they seem so different and yet they really have so many unexpected things in common.

Today, I wanted to talk about writing this series—what I learned, what it’s meant to me, and what I hope it’s meant to my readers. Of my four series, this is the first one I’ve finished, so I’ve learned a lot about writing a series, carrying plot lines across multiple books, and revisiting characters who have already achieved their happily ever after. In particular, this series taught me:

--To give each of the main character a distinctive voice/backstory/conflict – to make each of them feel different and authentic, they can’t all sound the same. Which is why Boreas was always so formal and Owen always said “Aw” and Chrysander talked with so much slang and why Devlin doesn’t talk much at all.
--To incorporate a bromance with the romance. Though the romances were always the main stories, the relationships between the men in this series were just as important to plot and character development (and just as much fun to write!). Writing a bromance into a romance allowed the reader to see the characters in a variety of situations and perspective, made them more well-rounded, and more likeable, too.
--To increase the stakes with each book. One of the ways to draw readers from one book to the next in a series is to create characters about which they want to read, and the other main way is to increase the stakes each time so it gets harder and harder to imagine how the good guys will win out in the end. That was definitely a challenge in this series, especially since part of the answer to that question involved some pretty big losses and sacrifices.

In addition to what this series taught me as a writer, it’s also meant a lot to me personally. Many of the characters in this series are dealing with grief, loss, or longing for a family and a place to belong—and those were all things that came from experiences and situations that I’ve experienced myself. And it seems like, at least sometimes, these were themes that reached out and touched readers, too, based on the messages I’ve received over the last two and a half years. Little means more to a writer than knowing they’ve touched a reader in some way.

Finally, as to what I hope the series might mean to readers: I hope readers will find hope and possibility in these stories of redemption. None of the heroes in this series felt worthy of love, and yet they all found it against the odds and at the most unexpected times and places. That’s one of the things I love about writing romance – they really are hopeful stories that tell you that, no matter how low or alone you feel, you, too, can have a happily ever after.

I gave each of the books in the series very special dedications. Dedications, in each book, that were to you:

North of Need: To everyone struggling with the loss of a loved one. May you find your Owen when your heart is ready.

West of Want: You can’t choose how or when you die, but you can choose how you live. This book is for the living.

South of Surrender: This book is for everyone struggling to surrender what they are for what they most want to become. You can do it, and you are not alone.

East of Ecstasy: You are good. You are worthy. You are beautiful. You are lovable. Never doubt it for even a single second.

So, thanks to Reading Between the Wines and all the readers for taking this journey through the Hearts of the Anemoi with me. It’s meant the world and I thank you from the bottom of my heart!

Do you have a question for Laura about this series? Ask her anything!

Thanks for reading!
Laura 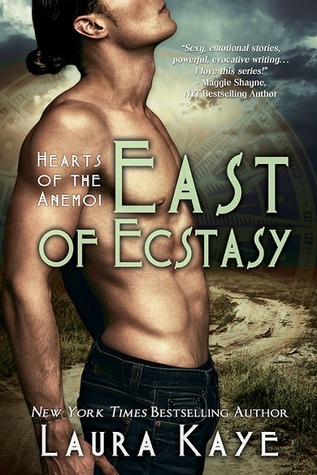 
But Devlin’s love puts Annalise in the path of a catastrophic storm, and in the final Armageddon showdown between the Anemoi and Eurus, sacrifices will be made, hearts broken, and lives changed forever…or lost. 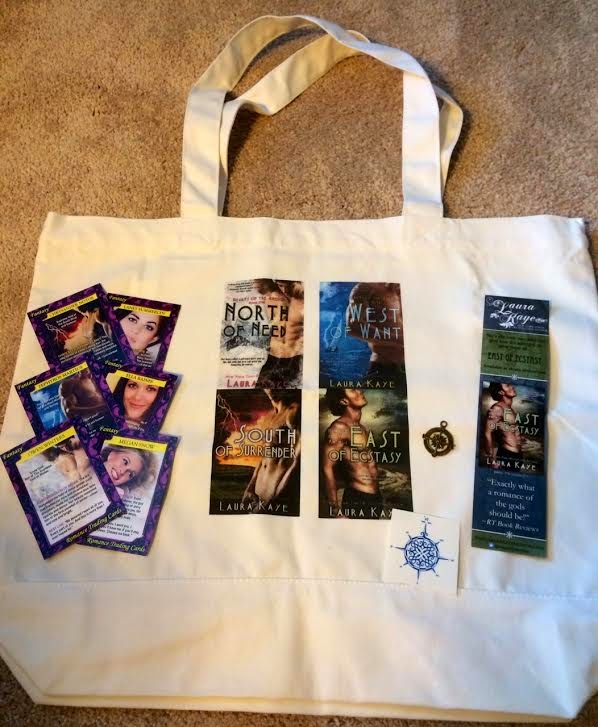 Individual Giveaway:
Tote bag and swag, open to international.
To enter, please comment on the blog post and include their email addresses. 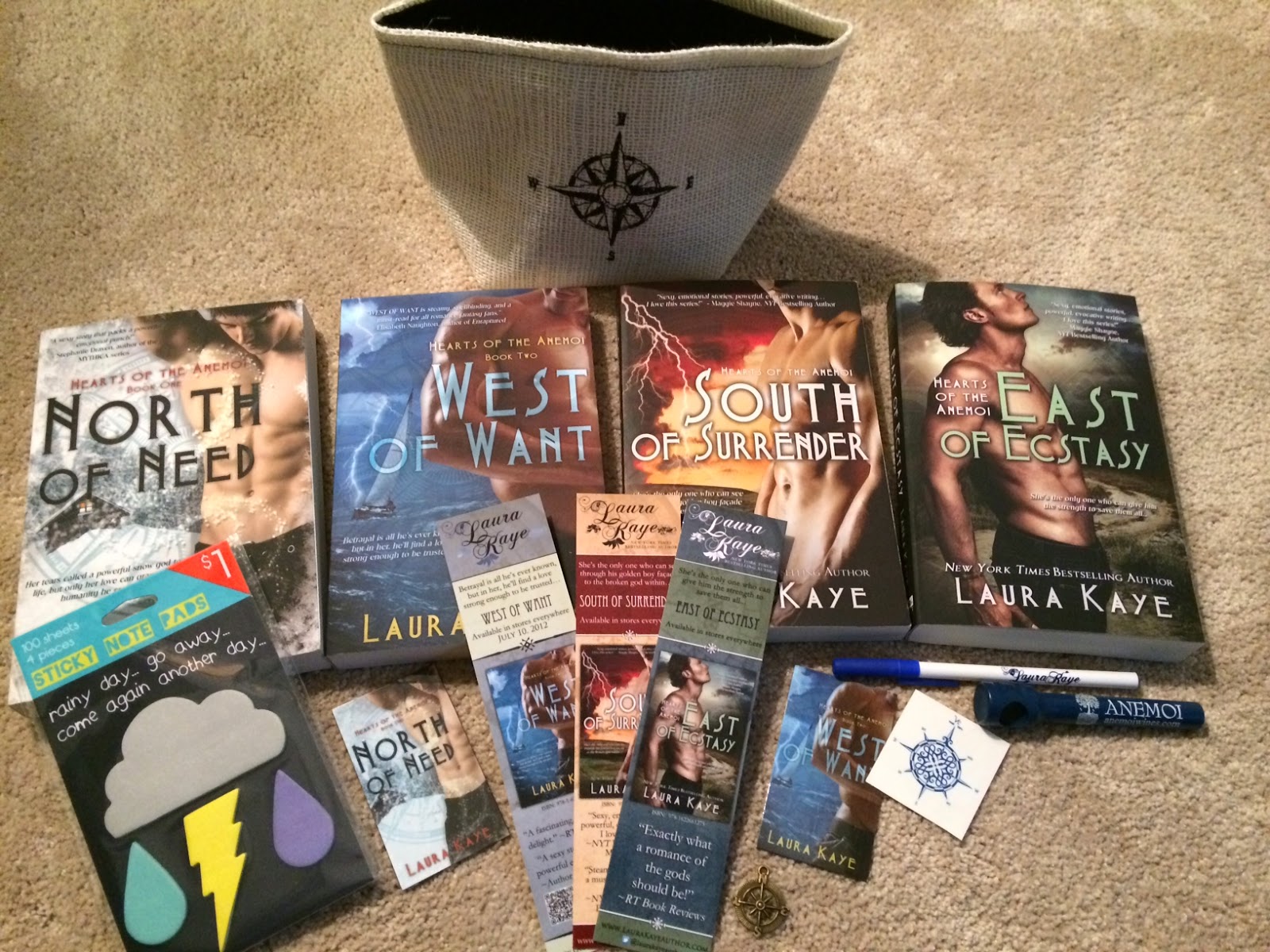 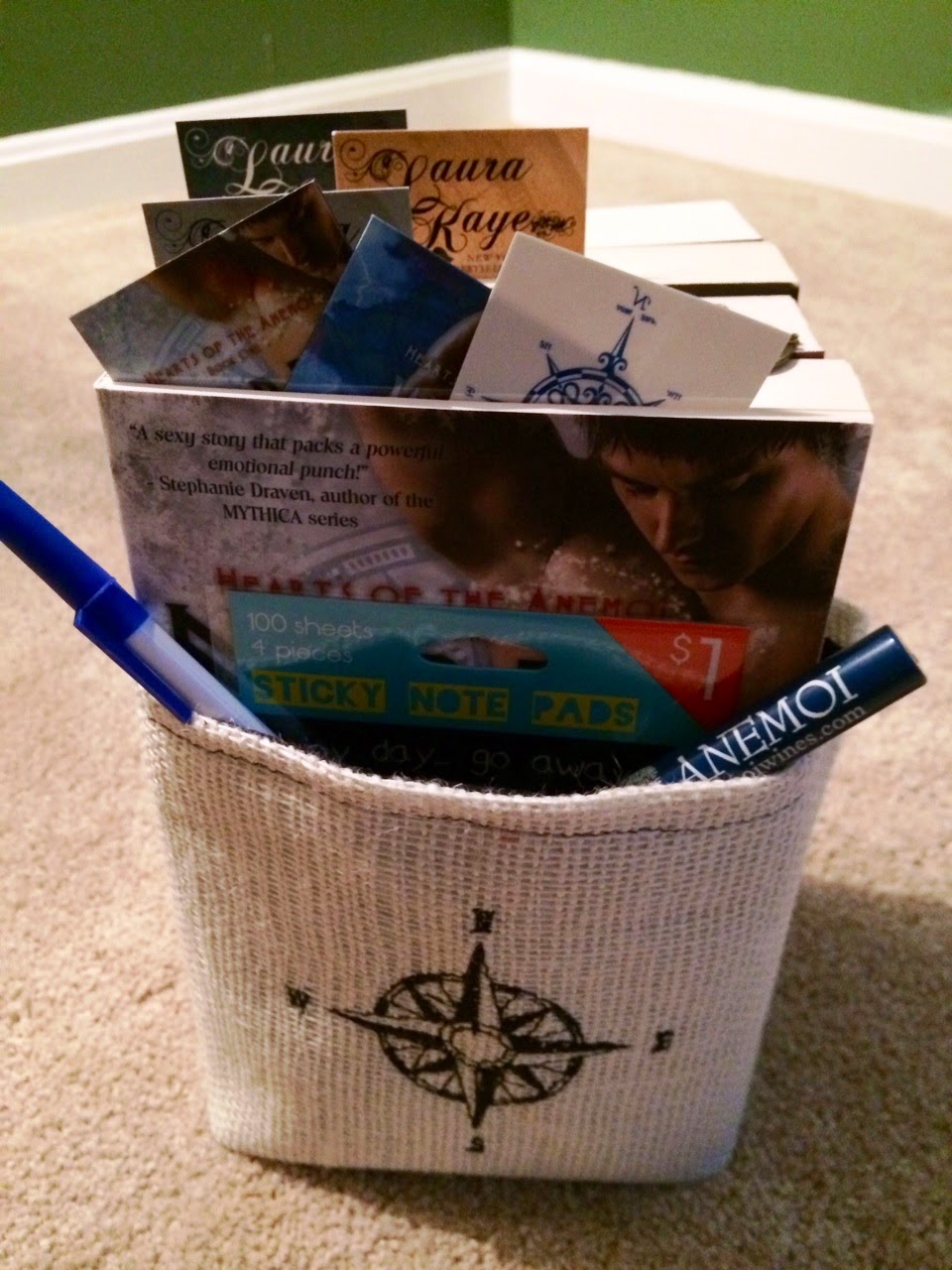 Tour-Wide Giveaway:
A set of four signed books (each book in the Heart of Anemoi Series) and swag in a basket.