Today I have the super sweet and talented Cynthia Eden joining us for a great guest post and a fabulous giveaway! Cynthia has a new release, Never Cry Wolf, coming out next Tuesday the 28th and if you like hot alpha wolves then you'll want this book! You can read my review *here!*

I Have A Paranormal Addiction 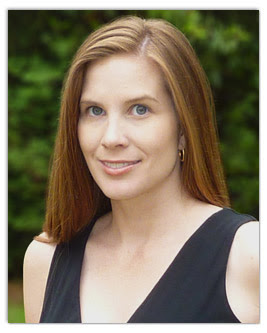 Hi, everyone! A big thanks to Crystal for having me at her place today!
I have a confession to make (though it’s not going to catch many folks by surprise). I have a paranormal addiction. I just can’t get enough of vampires, demons, and shifters.
I can’t exactly remember when I first became hooked on the paranormal world. Maybe it was back when I was a kid and I used to watch horror shows on the USA Network. Back then, they had a guy called Commander USA who hosted a horror marathon (sort of like Elvira did). I would watch those shows for hours—and always hate when the vampire got slayed at the end. Such a sad fate.
As I grew older, I read tons of monster books, I watched as many paranormal shows and movies as I could find, so, yes, that meant I never missed a BUFFY THE VAMPIRE SLAYER episode. How could I miss it? Spike was awesome! And now, these days, I eagerly tune in to catch each episode of TRUE BLOOD on HBO. Thanks to Alcide and Eric, my addiction is just growing. 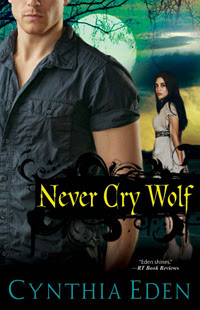 So when I write, it’s pretty much only natural for me to write about paranormal heroes and heroines. I love putting new spins on old myths, and I sure do love to see just how far I can push my characters. In NEVER CRY WOLF, I had the chance to write about one of my favorite paranormal beings—the wolf shifter. My hero, Lucas Simone, is the alpha of his pack. Tough, strong, you definitely want this guy on your side in a fight.
And, unlike the monsters who appeared in those old black and white movies, I can guarantee you that Lucas won’t get slayed at the end of the story. Instead, he might just get the girl. (Who am I kidding? It’s a romance! Of course, he’ll get the girl—he just has to slay all the bad guys coming after her first.)
Do you have a paranormal addiction, too? What started your addiction?Leave me a comment, and I’ll pick one person at random to win a copy of NEVER CRY WOLF.
Have a great day!
Cynthia Eden
www.cynthiaeden.com
NEVER CRY WOLF—Available 6/28/11 from Kensington Brava
Be afraid of the big, bad wolf…
~*GIVEAWAY*~
As Cynthia mentioned above, she is giving away one copy of her upcoming release, Never Cry Wolf.
To enter, just leave a comment answering the question at the end of her post and make sure to leave an email address so that we can contact you if you're the winner!
Giveaway will close at 11:59pm on July 7th when Cynthia will choose one winner at random. Open internationally.
Good Luck Everyone!
Here's some more about Never Cry Wolf:

RUNNING WITH A DANGEROUS CROWD
Lucas Simone is not the kind of guy you mess with. He’s big, he’s strong, and his eyes hint at a wilder side most women can’t handle. Of course, that’s because his predatory instincts are no metaphor—he’s a genuine Grade-A top-quality werewolf, tough enough to fight his way to dominance over the scariest pack on the West Coast. There’s only one chink in his armor. Unlike most alpha dogs, Lucas has a reputation for protecting the weak and innocent.
Sarah King is counting on that protective impulse—it’s the only thing standing between her and certain death. There are only two problems: one, she’s not quite as innocent as she’d like Lucas to believe. And two, if he doesn’t stop stoking Sarah’s animal lust, it’s only a matter of time before her own wild side gets unleashed…
Read an Excerpt