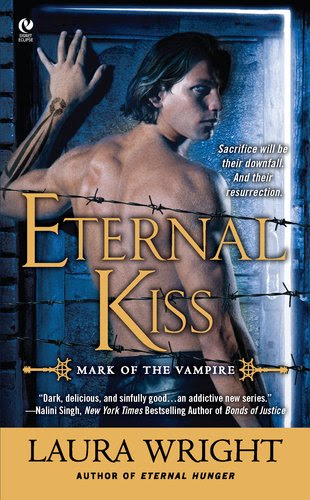 Eternal Kiss (Mark of the Vampire #2)
by Laura Wright
Paperback, 384 pages
Published April 5th 2011 by Signet
ISBN 0451233840
Good Reads
Raised by the Breed, Nicholas Roman wants to stop the Eternal Order of Vampires from controlling his life, and using other males from his bloodline-including possibly his son-for their vicious reign. Only a beautiful vampire stranger can help him. But what are her true motives?
My Thoughts:
Eternal Kiss is dark and sexy; every page will leave you craving for more!
I fell in love with the Roman brothers in the first novel of the Mark of the Vampire series, Eternal Hunger but this novel, Eternal Kiss, just blew me away! Nicholas Roman’s story is dark, deep, dangerous and enthralling – I could not put it down! He has a lurid past and a shocking secret that could destroy the life he’s built with his brothers and his developing relationship with Kate if it’s ever revealed.
I have to admit that I was drawn to Nicky from the start, in the first novel he was the gentlemen of the brothers but you could tell that there was a tortured soul underneath his calm veneer and in EternalKiss author Laura Wright masterfully peels away the multiple layers in his character, drawing you deeper and deeper into him until there is no turning back. Honestly, he is one of my favorite heroes out there. Everything I look for in one, he has! Loyal, sexy, self-sacrificing, fierce, strong, smart, brave, loving…I can keep going and going…
He is paired with the perfect heroine for him, Kate Everborne. I rarely find a series where I love all the heroines but so far we’re two for two here. Kate is smart, courageous, strong and witty; the ultimate heroine. The relationship between these two could not of been better written. Both Nicky and Kate have major baggage and trust issues but the intense sexual tension is the biggest shining point, and it leads to a scorching climax for these two. Scorching people.
But they weren’t the only characters in this book; there were subplots involving others that just enhance the story and invest you further into this world. The dialogue between the brothers themselves is humorous, sarcastic and entertaining; some of my favorite scenes are with all three of them.
Every scene is well thought out, detailed and descriptive; immersing the reader fully into the story line.
I loved the fact that Wright provided a glossary for this novel, the word that she has created is interesting and unique but it always helps to have a page you could turn to if you forget what a new word or term used in the story means.
Nail biting twists and turns, fantastical suspense, relentless action and fiery romance this is a paranormal romance that you cannot pass up! There was also a fabulous set up for the next book in the series,Eternal Captive, which I am just dying for!