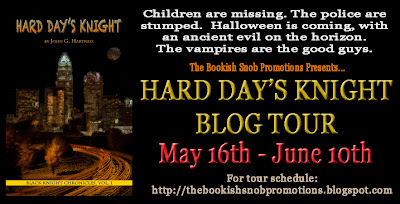 Writers as Role Models?
By John G. Hartness
I was reading a few blogs today about Neil Gaiman’s Sandman comic and his depiction of a transgender character, and it got me to thinking about the role writers, and by extension our characters, can play as role models. Now I don’t want to be anyone’s role model, unless you need lessons on cheap beer and fried food. If that’s what you’re looking for, I can be your guy. Otherwise, not so much.
But I’ve realized over the past few years that a lot of my world view came from books that I read as a kid or a teen. Growing up in rural South Carolina, the types of people I encountered growing up was fairly limited. There were no Jews in the town I lived in, and only one Catholic family. I don’t know if there were any atheists or agnostics, because pretty much everyone was in church somewhere on a Sunday morning.

Everyone spoke English as a first language, and everyone I knew was born in this country, as were their parents. Frankly, some of them weren't really that great at the English bit, but it was as close as any other language, so we gave them a pass.
The point I’m getting at is that the only place I met anyone of a different heritage was in books. The first openly gay person I ever heard of was in Mercedes Lackey’s Valdemar novels. The first Jewish person I felt like I knew was Kitty Pryde of the X-Men, and next to Nightcrawler, she wasn’t just perfectly normal, she was hot.
So my opinions on certain types of people were formed wholly from books that I read, with nothing else to go on. I’m sure when Mercedes Lackey decided to write the Magic’s Pawn series that changing the mind of a redneck kid from South Carolina was pretty far from her mind. And I’m sure that Chris Claremont didn't have me in mind when he wrote some pretty telling dialogue for Kitty Pryde in a few issues of X-Men.
But I keep them in mind when I’m writing. And I try to think about who might be reading what I’m writing, and despite whatever snark I might put into a book, I try to make sure that the characters don’t do anything I totally disapprove of (not that I approve of drinking people’s blood, but sometimes you have to do distasteful things to stay alive).
I certainly don’t think that that every writer needs to concentrate on social issues while writing a fantasy novel, but every once in a while you get a chance to say something important with your work, and when you get the chance, you should say it. Who knows, there might be an impressionable kid reading who will grow up with a little bit wider world view because you helped him see something past the end of his block.
Next Stop on the Tour: (June 4) Ren’s Blogging About

John G. Hartness is a recovering theatre geek who likes loud music, fried pickles and cold beer. He’s been published or accepted online in several journals including The Dead Mule School of Southern Literature, cc&d, Deuce Coupe and Truckin’.
His first novel, The Chosen, is an urban fantasy about saving the world, snotty archangels, gambling, tattooed street preachers, immortals with family issues, bar brawls and the consequences of our decisions.
He followed up The Chosen with Hard Day’s Knight, a new twist on the vampire detective novel and the first in a planned series of at least five books. The second book of The Black Knight Chronicles, Back in Black, landed in March 2011 and has enjoyed immediate success.
John has been called “the Kevin Smith of Charlotte,” and fans of Joss Whedon and Jim Butcher should enjoy his snarky slant on the fantasy genre. His next novel, Knight Moves (Black Knight Chronicles Vol. 3) is due out in the summer of 2011.
He can be found online at www.johnhartness.com and spends too much time on Twitter, especially after a few drinks.