What Inspired The Hpnotist – by M. J. Rose
Growing up, I didn't want to be a writer; I wanted to be an artist. We lived a block away from the Metropolitan Museum of Art and I started taking Saturday morning art classes there when I was just seven years old.
I've often felt art is my religion and that museums in general, but the Met specifically, are my temples of choice. That's where I go to be renewed, refreshed and inspired. I don't think I've ever gone longer than a month without visiting there.
So its not all that surprising that sooner or later I'd write a novel with a museum as one of my main characters and that I'd pick the museum that was in my backyard when I was a kid.
But how I got idea for The Hypnotist is surprising, at least to me. Sometimes I find it reassuring. Other times frightening. See what you think.
One day about three and a half years ago, on one of my regular pilgrimages to the Met, I headed straight for one of my favorite spots. The Mastaba Tomb of Perneb is a tiny bit of Fifth Dynasty Egypt transplanted to Manhattan, a gift from Edward S. Harkness to the museum in 1913.

You can enter the limestone tomb from the left or the right. One doorway leads to the main offering chapel. I took the other, which leads to a second ritual chamber. The space is very small and only three or four people can fit at the same time. I was lucky to be in the intimate ritual chamber alone and looking through the slot in the wall at a wooden statue of Perneb in the room beyond known as a serdab. In ancient times this passageway allowed for family and priests to offer up incense and chants to the deceased.
I heard footsteps. A little girl about seven or eight had entered and came up beside me to look through the slot. She had long blonde hair and was wearing a school uniform. I watched her examine the space, giving every section careful attention.
"It hasn't changed much at all," she said finally in a wistful voice.
I asked her what she meant.
"Since the last time I was here," she said.
Something about the way she said it made me curious. "When was that?" I asked.
"When I lived in Egypt."
"You know this tomb has been on display in this museum since 1916." I said.
"I lived in Egypt way before that," she said and smiled. She was about to say something else when from outside the chamber an older woman's voice called out.
"Veronica, it's time to go. Now. Please."
The little girl ran off, quickly, without looking back, without giving me a chance to ask her anything else. 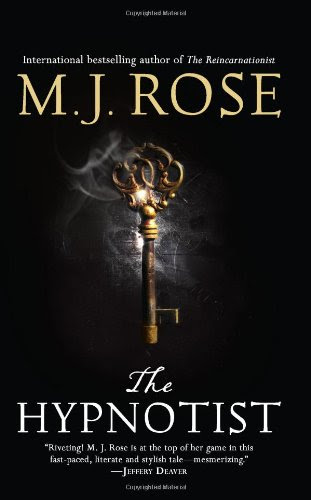 Even though I write about reincarnation, I haven't had any meaningful reincarnation episodes of my own. I don't get visitations. I've never seen a ghost. But I'm not sure what happened that afternoon.
I can picture Veronica in her navy jumper and white blouse that had a dark smudge on the collar. She had a one-inch scratch on her left hand. Her hair was pulled off her face with a silver barrette. A lot of curls had escaped. She had a child's voice but it was so charged with adult emotion.
It was that emotion which sparked the idea for my novel, The Hypnotist. And the paintings and sculpture at the Metropolitan Museum that fueled it.
If you go the Met, please go visit Perneb's tomb. And if you see a little girl there with long blonde hair and a blue school uniform... ask her if her name is Veronica... and if it is, thank her for me.
You can find out more about M.J. Rose and her Reincarnationist series on her website and GoodReads.
Posted by Crystal @ RBtWBC at 6/16/2011 06:00:00 AM