Review: Dreams of a Dark Warrior by Kresley Cole 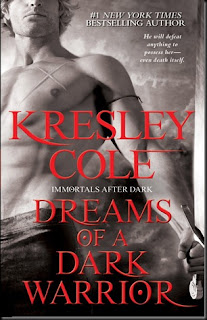 Gallery & Pocket Book Blog Tour
Dreams of a Dark Warrior
Kresley Cole
Immortals After Dark #11
Mass Market Paperback: 528 pages
Publisher: Pocket (February 15, 2011)
Language: English
ISBN-10: 1439136807
ISBN-13: 978-1439136805
Amazon - GoodReads - Kresley Cole
He vowed he'd come for her. . .
Murdered before he could wed Regin the Radiant, warlord Aidan the Fierce seeks his beloved through eternity, reborn again and again into new identities, yet with no memory of his past lives—only an endless yearning.
She awaits his return. . .
When Regin encounters Declan Chase, a brutal Celtic soldier, she recognizes her proud warlord reincarnated. But Declan takes her captive, intending retribution against all immortals, unaware that he belongs to their world.
To sate a desire more powerful than death. . .
Yet every reincarnation comes with a price, for Aidan is doomed to die when he remembers his past. To save herself from Declan's torments, will Regin rekindle memories of the passion they once shared—even if it means once again losing the only man she could ever love?

My Thoughts:
Dreams of a Dark Warrior is an emotionally intense novel that will leave you breathless. Cole really outdid herself with this one, it is EPIC people and I am going to skip my normal form of short reviews here on PRA and get comfy because I cannot say enough good things about this book!
A thousand years ago Regin lost the man she planned to spend eternity with; a berserker warlord by the name of Aidan the Fierce. But he vowed to find her again, and he has. (How flippin' romantic is that?!? But you know there is a catch...) Aidan has been reincarnated four times thus far, but with each one comes an even more gruesome death following their first kiss and the return of his memories. This time, Regin is determined to stay far away from Aidan so he doesn’t die again in this reincarnation. But when he turns out to be the evil-immortal-hating Magistrate for The Order, Declan Chase, she must use their curse against him to save herself and her friends being held prisoner.
Declan is a scarred man, inside and out. He survived a brutal attack as a teenager that killed the rest of his family and now he is out for revenge, against the entire immortal race. When he is sent to capture Regin the Radiant he has no qualms about bagging her until he twists that knife and it makes him physically ill. Once she is in the prison he is reluctantly drawn to her over and over again.  Why is it this immortal, this freak of nature, can ease the tension he has felt a lifetime by just being near her? How can she affect him when none other can and when his medicine shouldn’t allow it to? She must have enchanted to him, to lure him to his doom, which is the only explanation for these insane feelings he is having and the impossible stories of reincarnation she is telling. Or maybe he's just going crazy...
It’s an ongoing battle between these two of intense emotions and profound actions. My heart clenched, twisted and somersaulted throughout this entire novel! Seriously, it was like it was on it's own little roller coaster ride. This story went a total different direction then I thought it would from Demon from the Dark, in there Aidan sounded like an unwanted stalker, not Regin’s soul mate. But I absolutely loved where Cole took it! The story line is parallel toDemon from the Dark and Pleasure of a Dark Prince so every now and then it overlaps with Regin's POV.
Dreams of a Dark Warrior is full of torment, passion, revenge, and a HEA that's weaved together piece by piece in amazing detail with characters that were peeled away layer by layer until they seemed as real to you as your neighbor next-door.
Regin the Radiant, the loud mouth glowing Valkyrie, hides her emotions behind outrageous humor. I cannot get "rock out with your cock out" out of my head, I've been saying it all day! She absolutely hates having inner dialogues with herself too but finds she’s doing exactly that because of Declan, which only frustrates her more. Her character earns depth & dimension and along the way you get look into her history with side trips into Aidan’s past reincarnations, their relationships and ultimately his demise. There’s a lot of detail but you never feel lost or bored, the story continues at a fast pace throughout.
Declan is straight up complicated, he has so many inner struggles and baggage you think ‘just end it for him now, put the poor guy out of his misery’. But Cole comes through for him with some wicked good twists. He never looses that bad-boy, slightly evil, edge - even at the end, and it’s great to see an author stay so true to her characters. And I do love me some bad boys. Num, num.
The dialogue between Regin and Declan is witty, spicy, full of tension and if you didn’t love Regin already you will by the end of this book. And you can’t forget about the scorching scenes between them that Cole delivers with a perfect balance between love, lust and sex.
The Lore is gearing up for the Accession and more characters show up that I’m sure we will see more of in future installments. I am so loving Lothaire, the Enemy of Old and Nix’s opposite, it might be the mystery, maybe the perfection or just the total bad-boy package, I don’t know. Yes, more bad-boy lusting but you can never have too much IMO! His novel is up next with plans to be released in January of 2012, so long to wait! But Cole said that there may be another IAD story in between, fingers crossed.
To sum it up, Dreams of a Dark Warrior is a dark, gritty, sexy and absolutely gripping tale! I seriously need a whole new rating system for this book.
One of many favorite quotes: “I finally understand what a dickie-do is. Your gut does stick out more than your dickie do.” (Regin)