The World is a Stage by Tamara Morgan (Guest Post/Giveaway)

Please give a warm welcome to romance author, Tamara Morgan
It’s Not That Kind of Shakespeare 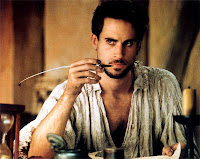 When I tell people that my newest release has a Shakespearean theme, I can almost hear the moans and groans across the Internet.
It’s not that I blame them…most people hear the word Shakespeare and immediately revert to their high school years, when the obligatory Hamlet or Henry V was shoved down their throats, burning all the way. I don’t know a whole lot of young readers who love Shakespeare and, admittedly, I was one of the many students who would watch the movie instead of actually reading the play. (High school survival tip: When watching the movie, always go for the Kenneth Branagh version. Always.)

Of course, as I got older and took college-level literature classes, I came to appreciate old William a little more—mostly because with age came the realization that he was a bit of a dirty bird. A lot of a one, actually, and if you know where to look, you can find dick jokes and sexual innuendo in almost every scene. Some of the poems, especially, are quite scandalous—though unless you’re familiar with the language, you’ll probably need a few Cliff Notes to help you transcribe most of it.
As a romance writer and reader, I love dirty humor as much as the next girl. In fact, it’s kind of my thing, and I never turn down a good “that’s what she said” opportunity. So while I appreciate Shakespeare for all his contributions to literature, I appreciate even more that he wasn’t afraid to include the naughty bits. Sex, passion, betrayal, humor—all those messy things that make life worthwhile.
So don’t fear the Shakespeare. Yes, the name invokes a little trepidation. Yes, he makes us all feel like we’re in tenth-grade English class again. But the man has some solid plot lines, the most memorable characters in history, and he knew how to throw in some good laughs. He wrote to entertain, to work up a crowd that ranged from the lowest members of society to the highest, and also to plumb the depths of human emotion.
In short, he was a romance writer before there were romance writers…even if most of his characters ended up dead.
* * *
About Tamara Morgan

Tamara Morgan is a romance writer and unabashed lover of historical reenactments—the more elaborate and geeky the costume requirements, the better. In her quest for modern-day history and intrigue, she has taken fencing classes, forced her child into Highland dancing, and, of course, journeyed annually to the local Renaissance Fair. These feats are matched by a universal love of men in tights, of both the superhero and codpiece variety.
You can find her on Twitter, Facebook, and Goodreads.
* * *
About The World is a Stage

Danger comes packaged in bulging muscles...and a codpiece.
Highland Games athlete Michael O'Leary is famous for his ability to charm a woman right out of her pants. Maybe a little too famous. When he’s sidelined with a knee injury, his wingman pounces on the chance to take full advantage of Michael’s idle time. Trying out for the local adult-themed Shakespearean production seems simple, but there’s a catch. Michael must woo the notoriously demanding lead actress, Rachel Hewitt, thereby freeing his friend to pursue a courtship of Rachel's sister. Rachel hates the thought of handing over the lead role in her admittedly scandalous troupe to someone so wholly uneducated in the ways of the Great Bard. But she’s in a bind, and the only one who can step up is a man who looks way too good in a codpiece—and knows it. To add insult to injury, he refuses to take the role until she agrees to take his place in some barbaric warrior race. She’ll do it, but not with a smile. Unfortunately, the hardest part isn’t antagonizing her Scottish foes. It’s resisting the one man who seems determined to line and cue her heart—forever.

Warning: This book’s half-naked Shakespearean actors are not approved or acknowledged by people with actual literary merit. Neither are the dirty limericks.
Add to your Goodreads shelf or purchase at Amazon and B&N (June 5th, 2012)


~*GIVEAWAY*~
Tamara is giving away a $5 Gift Card to Samhain Publishing to one reader. To enter, just leave a comment on this post and then fill out the Rafflecopter below! Additional entries are available but not required. Good luck!