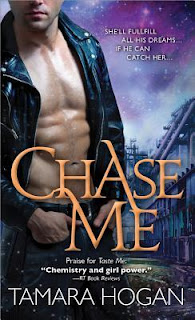 
Incubi, sirens, vampires, Valkyerie, faeries, and were-creatures live secretly alongside humanity in this gritty, sexy series.In the second installment, Valkyrie archaeologist Lorin Schlessinger and werewolf geologist Garbriel Lupinsky are assigned to work together on a dig site. Gabriel's methodical work practices and Lorin's inexplicable attraction to him grate on the archaeologist's nerves. But when she unlocks a cryptic box that sends a signal to intergalactic enemies, Lorin will have to set aside her feelings and work with Gabriel...or risk losing everything.


In the mood for a humorous paranormal that has all sorts of creatures, a little mystery, some "Beam me up Scotty", and hot sizzling energy releasing sex? Then you do not want to miss Chase Me.

Gabe and Lorin have not had much interaction before being assigned to work together at Lorin's dig site in Northern Minnesota. What little they new of each other had come from first impressions or gossip. So surprise surprise when they find themselves living in close proximity they wear on each other like sandpaper. But sandpaper that has enough friction to make some heat, and there is plenty of heat between these two.
So you have a werewolf and a Valkyrie, a strange discovery in the dirt that has the whole "other" population excited, politics, family issues, and potential space invaders. Quite a lot to throw together, but it all works. Hogan keeps things light and humorous yet can also bring out strong deep emotions in her characters. She also brings the scenery to life, though as a fellow Minnesotan might be a bit biased. It is fun to read about places you actually drive past or have been to. And to read about the sweltering summertime weather to the frost covered ground brings it to life in the mind; sight, sound, and smell combined.
Chase Me may be book two in this series but you will be able to slip right into the story. It feels like a book one as you don't have the repetition of reminding readers what has happened before, which is great for those of us who get sick of rereading what has been said in previous books. This was just plain fun to read, making the next book by this author something to eagerly anticipate.