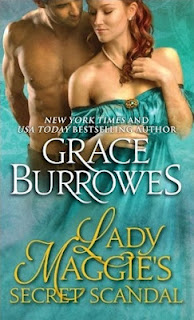 
Maggie Windham, oldest of the Windham sisters and a by-blow from His Grace’s pre-marital wild oats, finds herself in desperate needs of an investigator to help her retrieve a missing reticule. Benjamin Hazlit knows the Windham family secrets, and can be trusted to keep them to himself, so Maggie turns to Benjamin, though it means ignoring his too-broad shoulders, his too-knowing smile… and his too-skilled kisses.
As Benjamin starts the search for Maggie’s missing purse, he realizes two things: First, whatever was in that purse, its loss has Maggie not just rattled, but terrified. Second, Benjamin will go to any lengths to see Maggie’s peace of mind restored, even if it means he must keep himself in very close proximity to the shy, secretive lady who says she wants nothing to do with him.

Goodreads
Purchase at Amazon, Barnes & Noble, and The Book Depository


Lexi's Thoughts:
A woman’s purse can hold her whole life. Think about what you have in yours right now, what would happen if it were lost or stolen? You might have to call your bank and credit cards, replace a phone or even dare we mention, a kindle. Though most of us would not have anything capable of black mailing us. Lady Maggie had something hidden in hers that if in the wrong hands could destroy lives. Interested yet?

Typically in a historical romance the bastard children are males. Lady Maggie is anything but typical, she is a bastard daughter who has been recognized and adopted by her titled father. Though that fact has a huge impact on her life it is her personality and strength that really set her apart. As rigid as she holds herself together it is exciting to see how she learns to live a little.

Ben has his own secrets, or should we say he keeps plenty of other’s secrets along with one of his own. A crafty way to make money, becoming a freelance private eye. Ben doesn’t need the money so it would appear he does the snooping around and uncovering lies for entertainment or fun. Whatever his motives he is a great character and will have you falling in love with him way before Maggie starts her fall from grace.
Burrowes is a wonderful story teller. She has great characters with very real emotions. And she made sure that there is more story going on than just the hero and heroine falling madly in love then poof the end. Lady Maggie’s Secret Scandal has a few mysteries threaded throughout, just enough to keep those pages turning. If you love historical romance and haven’t tried Grace Burrowes you really should think about it.