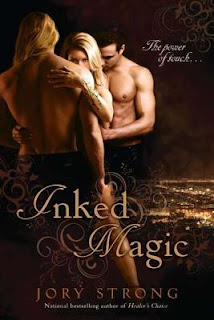 
From the New York Times bestselling author of Healer's Choice comes the story of a woman with the power of touch. Skin doesn't lie to her. It is her gift, sometimes her curse. She feels what others felt, and sees the things held in their memories... With the touch of her palms to the skin of a crime victim, San Francisco tattoo artist Etaín can see the faces of the guilty and draw them. Changeling elf but unaware of it, at odds with her police captain father and FBI agent brother, magic and gift have put her in the path of two compelling men.Cathal Dunne, the son of an Irish mob boss, needs Etaín's help finding the rapists who left his cousin for dead. Eamon, a powerful elf lord, is determined to make her his consort-wife.Her gift once made permanence impossible when it came to a lover. Now, as she approaches the transition to fully Elven, her survival depends on keeping two. One of the men is willing to share her. The other isn't-until the search for a sexual predator turns deadly, and only by paying magic's price will there be any future at all.


Lexi's Review:
Like intertwined vines of ivy Strong has woven together elements of paranormal, fantasy, magic and romance. Each holding part of the story in their own way, but when combined create something new and irresistible. Inked Magic is so much more than an erotica book. The story line is rich and deep enough to keep you entranced, it just gets broken up with steamy scenes every now and then.

There is so much more to Etaín than we have been shown, even more than she herself knows. There is a lot of story in this first book, plenty of action (revenge in the form of murder and a serial rapist for example) and truths reviled. But there are also plenty of questions; like who is her father, what are the symbols in her tattoos, what is happening to her magic and the links she is forming with Cathal and Eamon? So many more and we have to wait for the next book to see if we get any answers.
Of course there is one who seems to know many of the answers regarding Etaín, Eamon. He is the blond god who shares the same heritage as Etaín and therefore has their peoples knowledge. So far he has given her small hints in an effort to draw her to him. After the life threatening events at the end of Inked Magic we will have to see if Eamon decides on a more direct approach.
On the other had you have Cathal, the dark and sexy Irish man. He has already made his choice, and his arms prove it. A tough choice for him, though choice may be stretching it a bit. Cathal was connected to Etaín the moment their gazes connected, a well written moment and one that changed the lives of both of them. Now it will be fun to see how he reacts to the magical revelations that are sure to come from Eamon.
Yes this is an erotic romance, but don’t let that stop you from picking it up. Or if your going for that then sit back and enjoy, it is great! But if you are looking for more than just steamy scenes this book has it. And if you happen to hold a fascination for anything fae this is a great new take on them, and one that will hopefully be expounded in the next book, Inked Destiny.
*A recommended Ménage read!