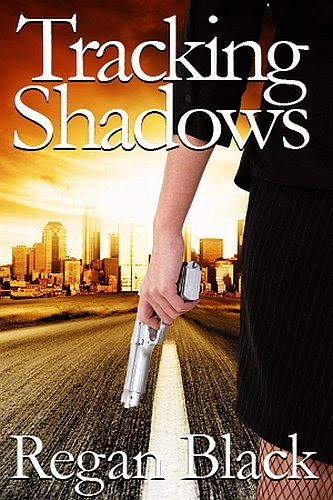 In 2096, the American government has gone above and beyond to 'protect its citizens', even regulating sugar and coffee. Every new legislative measure opens up a black market for an enterprising person willing to seize the opportunity. In Chicago, Slick Micky is the king of smuggling. Known to deliver anything, anytime, anywhere, he specializes in caffeine and sugar and works in the anonymity of shadows. But recently an old enemy is tired of waiting for Micky's empire to crumble and has called in the best assassin in the business to take him out. Trina Durham is an assassin with a sterling reputation, thanks to her unique ability to induce deadly hallucinations. When Slick Micky killed her best friend, she left Chicago - forever. She's back now, unable to resist the perfect opportunity for vengeance. But no one warned her Slick Micky might as well be a shadow. Or that shedding light on the man and his secrets would put both her heart and reputation at risk.

GoodReads
My Thoughts:
Tracking Shadows is a smart, sexy and dangerous read that you won’t be able to put down!
When her only friend was murdered Trina Durham ran away from Chicago, escaping her grief while learning how to control her unique psychic abilities and make a name for herself as a deadly assassin. But now Trina is back and she is out for revenge against the man that murdered her best friend. Taking the hit on Slick Mickey, the biggest smuggler in Chicago, was suppose to be an easy in and out job but it’s turning out to be anything but. When the mobster finally steps from the shadows her past and present collides, revealing deadly secrets for each of them and putting their lives even more at risk.
The world that Regan Black has built in Tracking Shadows instantly intrigued me; a country where the government has restricted anything bad for you, cigarettes, caffeine, alcohol, and where technology has had major developments. These restrictions have brought a great money making opportunity to Chicago’s mobsters and that is where the story starts. Slick Mickey is a mobster with morals; never dealing in the hard stuff and taking care of those that work for him as if they were family, his character appealed to me. The protagonist, Trina, really came to life on the pages though and was an incredibly endearing character. The emotional and physical tension between her and Mickey brought an edge to the story and grabbed at your heart. Each character in Tracking Shadows was feisty, strong and independent. Wonderfully developed with an immense amount of depth, providing witty dialogue and introspect. Regan Black has an entertaining and simple writing style allowing the story to flow smoothly. The world building was superb and didn’t overshadow the actual plot or characters.
Suspense and intrigue with a dash of romance, Tracking Shadows was a captivating read that felt twice as long as it’s 120 or so pages. I will definitely be checking out her Shadows of Justice series, which feature several characters from this novel that captured my attention.