*Originally reviewed and posted by me at sister site, Paranormal Romance Addict 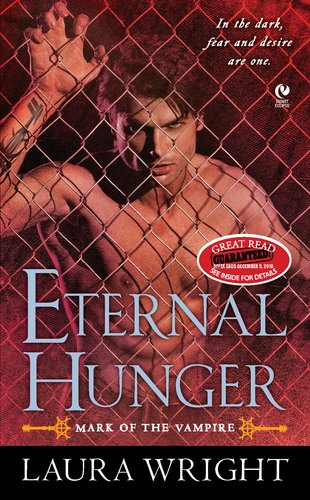 Eternal Hunger
Mark of the Vampire
by Laura Wright
Paperback, 366 pages
Published 10/05/2010 by Signet
ISBN 045123149X
In the dark, fear and desire are one...
Alexander Roman wants nothing to do with those of his vampire breed. Fate places him at the door of Dr. Sara Donohue, who is dedicated to removing patients' traumatic memories. But as their world's collide, Sara and Alexander are bound by something even stronger as one becomes hunter and the other, prey. And Sara's only chance of survival is to surrender to the final-and most unimaginable-desire of her life.

GoodReads
My Thoughts:
Great start to a sexy new series; Eternal Hunger is definitely a new favorite!
I struggled at the beginning of the novel because everything is thrown at you all at once; new terms, meanings, ect. It would have been a big help if there was a glossary to use as a reference, but after the first few chapters I was able to get the hang of this new world Laura Wright has brilliantly created and the story started to flow for me.
Alexander Roman grabbed me right from the start. He is a sexy alpha male and the eldest of the three Roman brothers who escaped their credentis and the Order, making a life for themselves in the human world.  Until the Order finds Alexander and forces him into morphing, a last phase in a pure blood vampire’s growth where he either has to find his mate or he turns into a sex crazed monster. Now Alexander must hunt down the impure, Ethan Dare, who is building an army against the Order, otherwise they will force his brothers into morpho as well.
Sara Donohue, a doctor who has spent her life trying to cure her brother from the mental effects of a deadly childhood accident, finds Alexander on her front porch and comes to his rescue. When she walks inside her apartment though, her world is turned upside down by the revelations of an ex patient and the vampire now lying on her floor.
As the danger around them heightens so does their desire. Alexander knows though that he can not have a lasting relationship with Sara, a human, because eventually the need to find his mate will take over, so though he seems to have a sizzling connection with her he tries to keep her at arms length. Because of his childhood past he doesn’t wish to have a mate period and refuses to be dependent on one person so he eventually succumbs to the passion rising between them. I loved the chemistry between these two, though I guessed the ultimate twist for Sara early on and it wasn’t a surprise for me at the end. The dialogue between Alexander and his brothers was wonderfully entertaining and I liked that by the end Sara earns their respect. I have a feeling that there was a lot of foreshadowing going on for a few pairs of vampires and I won’t be surprised if things turn out the way I’m thinking. All the characters really captured my attention and I’m going to grabbed Nicky’s story asap. Wright pens a great background for all and unique world building, letting just enough slip at a time. I read Eternal Hunger in one sitting; I just could not put it down
Eternal Hunger is dark and sexy with captivating alpha males, strong women and an intriguing world of pure blood and impure vampires. Full of romance, hot scenes, action and suspense this is a must read!