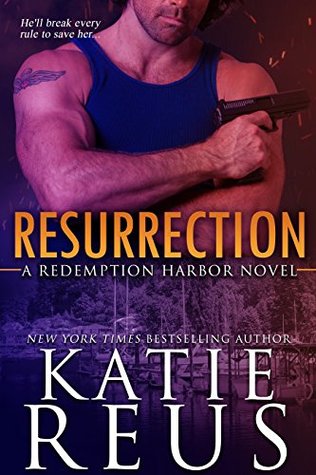 She faked her own death…

Skye Arévalo left the CIA and faked her death to protect Colt Stuart, the only man she ever loved. Months later, a brutal kidnapping draws her to quietly infiltrate a dangerous cartel. Just when she thinks she’s home free, things go horribly wrong and she escapes with bloodthirsty enemies on her heels…only to find herself face to face with a bewildered and angry Colt.

He’ll cross every line to save her…

When Colt, a former Marine, finds out the woman he loved betrayed him, he’s shocked and hurt, but it doesn’t stop him from breaking every law on the books to keep her alive. Unfortunately, it might not be enough to stop a powerful enemy who will do anything to see the world burn and Skye dead.


Linda's Thoughts:
Her time was running out….

The tidings of a new series from Katie Reus is exciting news indeed! Resurrection by Katie Reus marks the impressive debut of Katie’s new Redemption Harbor romantic suspense series. As all of Katie’s stories do, Resurrection drew me in from the start. Since this is the first book in the series, it also introduces the cast of characters many of whom are friends who have known each other since childhood. There’s unquestionably a score between Colt and his father that I hope Katie will delve into in future installments too. This is primarily the story of CIA operatives Colt Stuart and Skye Arévalo with a second couple figuring strongly, ex-linebacker Mercer and his wife, Mary Anne, an oncologist. The story is aptly told from their four viewpoints so you get into each of their heads at the appropriate times.

I’m not going to go into the story… You can read the blurb if you want a quick synopsis. Believe me, having this story unfold as you read is a breathtaking experience that you won’t soon forget.

The characters are likeable and come across as totally realistic. Colt has been mourning Skye’s death from an explosion while she was on an undercover operation for six long months when he shockingly comes face-to-face with her while rescuing his friend, Mary Anne, from a Mexican cartel. For Colt and Skye, this story is a second chance for them to connect. They are perfectly paired and have a combustible chemistry. Their sexy times are steamy with a capital S. Both Colt and Skye are my heroes: loyal, smart, tough and caring. I especially like that Colt wasn’t threatened in the least by Skye’s badassery and that she is comfortable in her own skin.

Mary Anne had been reported dead with a team of medical personnel who had been horrifically gunned down two months ago. Ends up that she was the lone survivor… Mary Anne was everyone’s friend and Mercer’s everything.

The cast of other characters are just as phenomenal and incredibly drawn. I can’t wait to read their stories in the following books!

Following please find a few of my favorite quotes from Resurrection:

“I should put a bullet in you right now, you stubborn jackass.”
“Good. I’ll have a scar to match the last time you stabbed me,” he snapped.
---

"Blood makes you related. Love and loyalty makes you family."

I listened to the audio which was expertly voiced by Sophie Eastlake. Sophie never fails to produce a flawless and polished performance and Resurrection is not an exception. She voices multiple characters consistently differentiating between them. Both her male and female voices sound genuine and she exudes all the proper emotions. Her voice is crystal clear and easy to understand. I love to listen to her narrations as they always make my listening experience a joy.

I am addicted to Katie’s books. Resurrection is hair-raising and packed with passion and danger from the start to the finish. The romance and the suspense are heart and soul intertwined – one never overshadows the other. The surprising twist at the end left me appreciating karma and grinning like a Cheshire cat. There’s no cliffhanger ending, but readers will undeniably be enticed to pick up the sequel, which is thankfully already available. Savage Rising is already queued on my phone ready for me to hit play! If you enjoy hot romance paired with edge-of-your-seat-suspense-which-never-lets-up in an action-packed, fast-paced adventure, I highly recommend that you check out Resurrection soon!!!!!