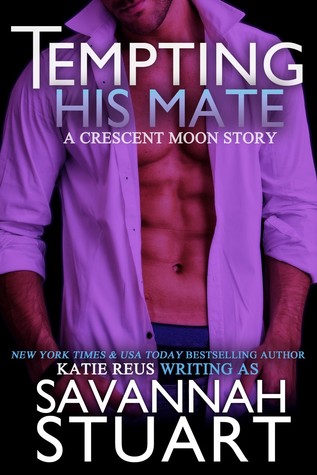 She ran from him once…

Wild one night stands are not Ella Hayes’s style, but with her confidence at rock bottom after a devastating betrayal and her painful departure from her jaguar pride, who could blame her for falling into bed with a sexy wolf? She never thought she’d see him again. And never in her craziest dreams did she expect to come face-to-face with him on her first day with the Kincaid wolf pack. Sleeping with Asher had been one of the most intense experiences of her life—but now she wonders if they could have more.

Tired of life as a lone wolf, shifter Asher has joined his cousin’s pack. The last person he expected to see was the sexy woman who ran out on him in the middle of the most incredible night of his life. The Ella he meets now is nothing like the wild, sensual woman he let his guard down with, but he likes both sides of the complicated female. But now somebody—or something—sinister is targeting Ella, and Asher moves quickly to get her under his roof and under his protection. Keeping the sexy female safe and proving they belong together are two missions he doesn’t plan to fail. Because this time, he’s playing for keeps.


Linda's  Thoughts:
“My name’s Asher,” he rumbled in that deep voice and she realized she’d been blatantly staring.
“I’m Ella.” And she wasn’t going anywhere, she realized. Not until she got a taste of this sexy male. Something told her one taste wouldn’t be nearly enough.

Looking for a fun, steamy read? Tempting his Mate by Katie Reus writing as Savannah Stuart is the third spicy installment in her Crescent Moon paranormal romance series which focuses on a wolf pack in Gulf Shores, Alabama. This is the story of Ella, a jaguar shifter cousin to Lauren, and Asher, Max’s sexy lone wolf cousin. Lauren’s and Max’s story was told in the second book, but this installment can be easily enjoyed as a stand alone if that is your preference. I’ve actually read this series out-of-order and don’t feel that doing so has impacted the pleasure I derived from any of the books.

As the story opens, Ella has left her jaguar pride to accept an accounting position with the Kincaid wolf pack in coastal Orange Beach, Alabama after having a falling out with her sister. As Ella is on her way to her new pack, she stops for the night and decides to do something totally out-of-character for her: She visits a seedy shifter bar where she hooks up with sex-on-a-stick Asher. They have a phenomenal evening, but, in the morning, Ella runs from Asher without a word. Little does she know that the sexy wolf she just slept with is tired of being on his own and has also accepted a job with the Kincaid pack as its new chief of security. Her life just got a lot more complicated.

In addition to the romance, there’s an interwoven danger element. I really liked both Ella and Asher. She told him he was going to have to work to court her, and he does!

Following please find a few of my favorite quotes from Tempting His Mate:

“Lose the pants,” she murmured.
His head tilted slightly to the side, his eyes narrowing a fraction. “Are you ordering me around?”
She grinned. “Maybe.”

Jeffrey Kafer does a great job narrating the audio. This isn’t the first time I’ve listened to him. I love his voice. It’s strong, deep and easy to understand. His sexy Asher voice was utterly swooney. Both his male and female voices sound genuine and remain consistent through-out. The end product is polished perfection. Seriously, if you get a chance to listen to the audio of this book, don’t pass it up!

Katie is one of my favorite authors. Even though this tale is novella-length, there’s no short shrifting in the plot or in the characterization. It kept me engrossed for hours …twice. I read the kindle edition, then thoroughly enjoyed it again in audio. If you like passionately hot shifter romances paired with suspenseful undercurrents, I’d highly recommend that you check out Tempting His Mate and Katie’s entire Crescent Moon series!