Coming to your from Harlequin is a sweet romance by Karen Rock, enjoy the excerpt below! 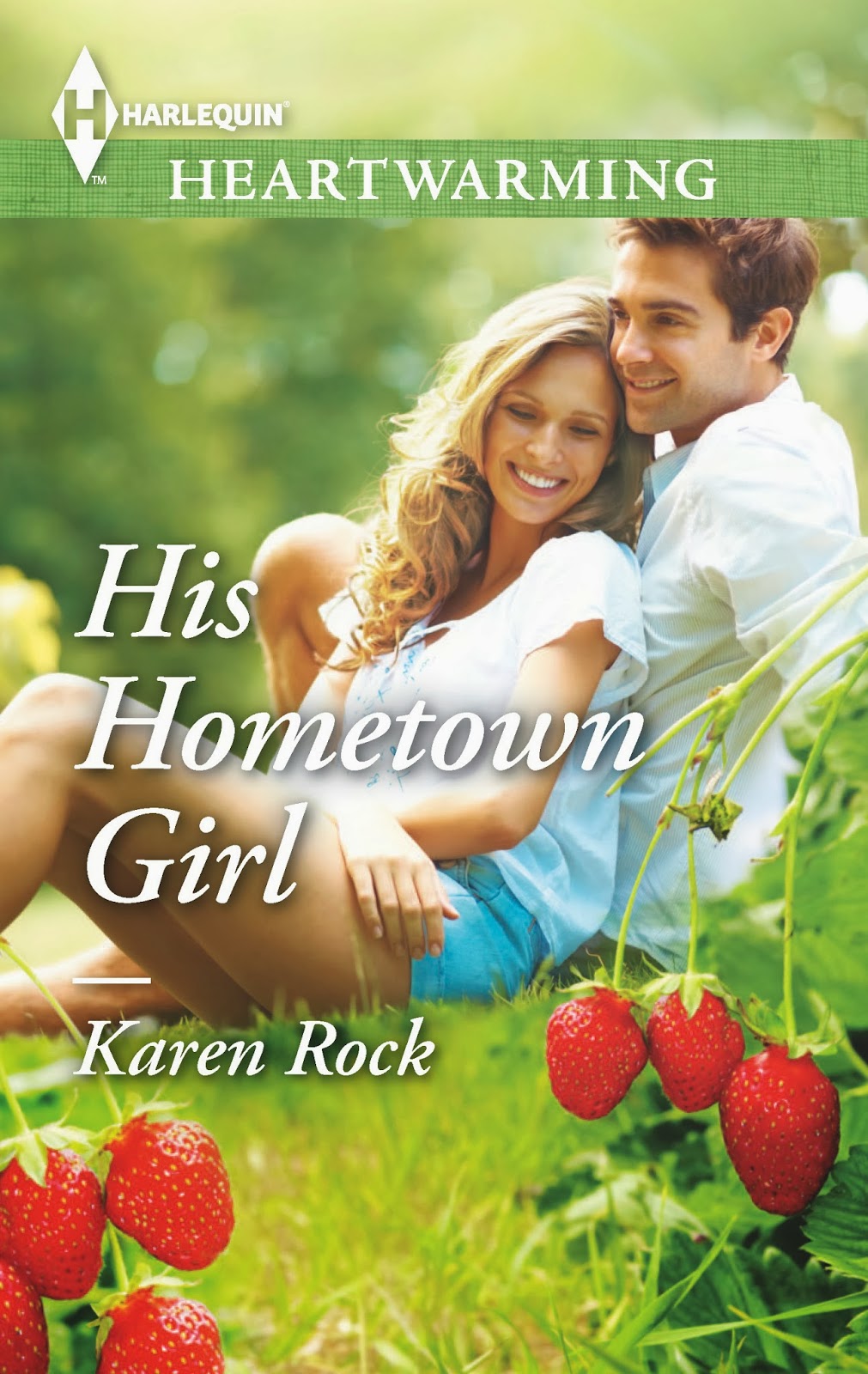 
He'd always managed to best her…Jodi Chapman will do whatever it takes to get top care for her autistic son. If that means going home and convincing local farmers to sell their land, so be it. Even if her biggest opponent, childhood rival Daniel Gleason, is equally determined to convince farmers to buy into his co-op plan. And he's not playing fair.Facing off against Daniel is the last thing Jodi wants. The attraction that's always fueled their competitiveness is as strong as ever and just as distracting. But with both their futures on the line, and years of distrust between them, how can they ever be on the same side?

The music began and Mary gave Daniel a little shove. “Have at her. Indulge us for old times’ sake. Everyone thought you two would make a great couple when you weren’t scrapping.”
He looked down at a dismayed Jodi. “Guess we can’t disappoint our fans.”
She threw her hands up and he swept her into his arms. And just like he thought, the feel of her brought back their middle school days. He recalled his sweaty palms on her tiny waist and how much he’d tripped because, instead of counting the steps, he’d counted the freckles on her nose. Kind of like now.
“Mr. Martin had some crazy taste in music,” she surprised him by saying, a far-off look in her eyes. “How did that count as exercise?”
Being around her raised his blood pressure. She was the best cardio he could imagine. They moved across the crowded floor, weaving in and out of other couples.
“No idea.” When the tempo changed he twirled and dipped her, their mouths nearly touching as he bent her over his arm for a long, breathless moment. The feel of her made his blood surge.
“Let me up,” she said in a rush, and pushed at his chest, her touch electric. When he straightened, he pulled her closer and smoothed the hair that had come loose from her bun, her locks like silk. He inhaled the light, fresh scent of her and his body tightened against hers. His eyes dropped to her lips and he remembered her taste: honeysuckle and lemon drops. Kissing her had felt like kissing sunshine and for a moment he lost himself in the glow of that memory.
“Daniel,” she whispered, her eyes shimmering up at him, her voice husky. “People are watching.”
“Let them.”
When she trembled in his arms, he knew she was remembering the afternoons he’d held her this way. How they’d lie snuggled in the deep grass together, the blue sky their only witness. It’d been magic. The ultimate trick, however, was her disappearing act. The thought sobered him and he loosened his grip. She challenged, exhilarated, frustrated and attracted him like no other. Yet she had crushed him, too, and he sensed that could happen as easily now as it had then if he wasn’t careful. He wasn’t just at war with her, he also battled himself.
As he guided her through the swaying couples, their bodies moved in perfect sync. Suddenly he thought of her ex and felt a rush of jealousy at the thought of her in another man’s arms.
“I’m sorry to hear about your divorce,” he said, and felt her stiffen.
“I got through it,” she said lightly, her eyes sliding from his.
“Do you still see him?” An irrational need to know how much time she still spent with
the man seized him. It didn’t matter—or it shouldn’t—yet somehow, it did.
A laugh-snort escaped her and her gaze flew to his. “Not since he left.”
“What about Tyler?” he blurted. The guy might be a fool for not returning Jodi’s love,
but he must at least care for his own child.
The music ended and he led her to a table by the window. After pulling out her chair,
he straddled his.
Jodi caught her lower lip between her teeth and gazed outside. The sun had set
completely and the moon was up, a wedge of creamy white casting its reflection onto the
lake. Night wind rattled tree branches, knocking them against one another. “Not Tyler, either,” she said at last, her voice sounding empty. Scraped out.
He found her cold fingers beneath the table and wrapped his palms around them. “He’s a terrible father.” And a horrible person. Who would abandon his wife and child? He’d known she was a single mother, but he’d never known that she was raising her son entirely on her own. After this night of revelations, she’d surprised him again and he admired her even more. What a strong, caring person.
Jodi nodded, her face bleak and beautiful. “Tyler wouldn’t stop crying after his dad left until—”
She froze, then yanked her hands away and stood. “I’ve got to go.”
“Jodi.” His voice stopped her. “I—I—” He broke off, searching for the right words the way he might grope for a light switch in the dark.
She glanced around the bar, the faraway look gone, her expression sharp. “We shouldn’t do this. It’s not good for either of us to get this personal. My focus is on Tyler. Not bars. Not men.” She gazed at him, her eyes pleading. “Not you.”
Before he could stand, she flew out the door, leaving him again.

Karen Rock has adored romance since receiving Harlequin Presents books from her grandmother each summer. She formed her Young Adult writing partnership, J.K. Rock- pseudonym for the CAMP BOYFRIEND series, with her sister-in-law and Blaze author, Joanne Rock in 2011. When Karen heard of a call for submissions to Heartwarming, Harlequin’s latest line, she was inspired by the possibilities of writing unforgettable, deeply romantic, tender love stories that mothers would feel comfortable sharing with their daughters. When she’s not writing, Karen loves scouring estate sales for vintage books, cooking her grandmother's family recipes, hiking the ‘high peaks’, and redesigning her gardens. She lives in the Adirondack Mountain region with her husband, daughter, and two Cavalier King cocker spaniels who have yet to understand the concept of “fetch” though they know a lot about love.

To enter: Pre-order a copy of HIS HOMETOWN GIRL on Kindle http://amzn.to/1eveD3C or Nook http://bit.ly/1ktNqWq!
Email a copy or picture of your receipt to karenrock@live.com along with-
Your name:
Your email address:
Blog you found the contest on:
You'll be entered to win a $25 gift certificate to either Amazon or Barnes and Nobles (your choice) as well as the four books in the prize picture.