Release Day Blitz: Walk on the Striped Side by Jessie Lane (#Giveaway)

We are incredibly excited to share with you the second book in Jessie Lane's Big Bad Bite paranormal romance series, WALK ON THE STRIPED SIDE. Out today! 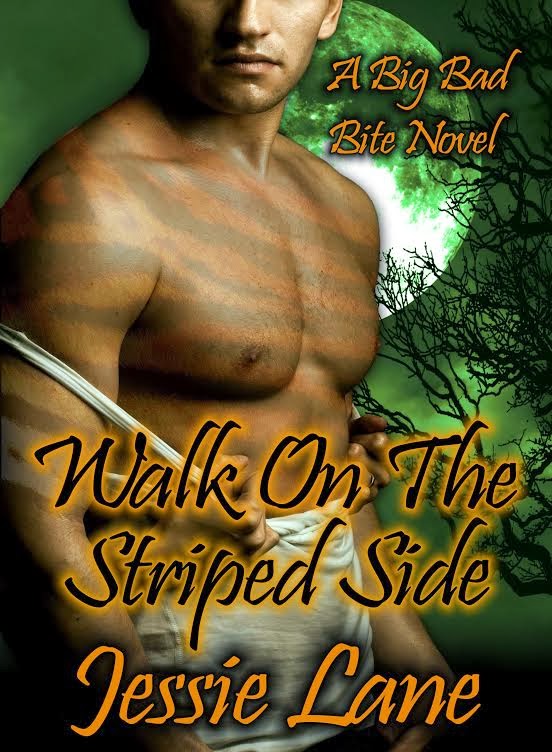 Does he have his claws in her for good? Or is she just yanking his tail?
Elena Demos’s life has been turned upside down. Her mother has passed away, leaving Elena and her two half-sisters to deal with their mother’s will and the crazy stipulations it contains. For the three sisters to inherit the substantial amount of money left behind, they have to go to work with two aunts they’ve never met, in the family business they’ve known nothing about, Amazons Inc. If that isn’t bad enough, she runs into the man who once broke her heart, and it’s only their first day on the job.
Gage Ivanov is a stupid beast. He let the woman who should be his mate go because she couldn't be told of his Other identity. Now, Elena’s back, but she refuses to give in to his demands for her to be his mate. The timing for all of this couldn’t be worse, either, because Gage and his circle of friends are trying to subdue a rogue pack of wolf shifters in Germany who threaten to out the Others to the world of humans. Will he be able to juggle the oncoming conflict and win back his mate?
Claws, love bites and handcuffs - OH MY!

After watching Ivanov sit there and stare at her for what felt like a century, he finally moved. Slowly leaning in towards her, their faces were only inches apart. So close she could feel his short, rapid breathing through his nose as it brushed her face. For the first time since the man walked into her building, all of the hairs on the back of her neck stood on end.
That scary focus of his amazing, green-gold eyes lasered right in on her own eyes, when his voice rumbled, “You’ve got it all wrong.”
“I do?” Elena murmured, suddenly shaky. Her inner alarms were blaring. Danger. Danger. Danger. It took everything she had not to slowly slide her hand back and put it on the butt of her own weapon that was holstered on her hip.
“Yes, you do. You see, I’d much rather be here with you.”
Did he just purr that?
“And why would you rather be here with me?”
A louder rumble seemed to come from the vicinity of his chest. What the hell was that noise?
“I’d rather be here with you because I don’t do spoiled, whiny, superficial, bleached-out teenagers. What I do like are mature brunettes who think they know it all. And I like them,” he paused for a second and another loud rumble sounded, “because after I break them in with a well-deserved spanking, make them see that they’re not as big and bad as they think they are, they end up knowing that they’ll never meet anyone like me ever again. Because unlike all the men they may have had before me, I do—in fact—know what to do with a woman’s body. And anyone they have after me will pale in comparison to what I gave them. I like knowing that I took a woman who isn’t a naive, little virgin to bed and debauched her to such a ridiculous degree that she’ll know she’s now just a bit dirty, but in such a delicious way. I like to ruin grown women, you see. They’re more of a challenge. Would you like a demonstration?”
Elena was damn near panting after that. Man, that voice of his was practically a purr that seemed to resonate all the way through her body until it was buzzing through her girly parts. It was such an amazing feeling that she was considering giving him a new nickname. The Talking Vibrator.
Her own breath was coming in small, rapid pants, and suddenly, she realized that she’d not been this turned on for a long, long time.
What in the hell was it about this man that was pushing all her buttons? WAIT. It didn’t matter what it was about him that sent her libido into a frenzy. She couldn’t have him. He was forbidden fruit for a couple of different reasons.
First of all, she was investigating him on behalf of the Major General. Second of all… well, the first reason was all she needed.
Just as Elena was about to open her mouth and tell him no, she didn’t want a demonstration, she wanted a confession, he did something that shocked the shit out of her.
He took in a long, exaggerated inhale, nostrils flaring much like that lion she likened him to earlier, and then his tongue came out to lick his lips like he was savoring something extravagantly tasty.
“Damn you smell good all pissed off and turned on.”


Grab the first book in the Big Bad Bite series for only $0.99, limited time only!

Crystal and Melissa often live half their lives with their heads in the clouds dreaming of alpha military hunks, werewolves and kick ass heroines crazy enough to chase after creatures that they unquestionably should know better than to chase.Their first YA novel, The Burning Star, was released in May 2012. Big Bad Bite is their second novel, but their first adult paranormal romance. They are now working on their next two novels, Walk On The Striped Side and Secret Maneuvers. With these projects underway, they are looking forward to showing the rest of the world their crazy stories, heroes and heroines that often plague their minds until written, and hope you will join them on their journey!