We'd like to share with you the new release of B.J Daniels ATONEMENT, a Western romance set in the Big Sky country of Beartooth, Montana. Sheriff Dillon Lawson lost his brother Ethan in a car crash a year ago, but when a woman named Tessa Winters shows up claiming to be pregnant with Ethan’s baby, Dillon can’t decide if this beautiful woman is a con artist or a victim! 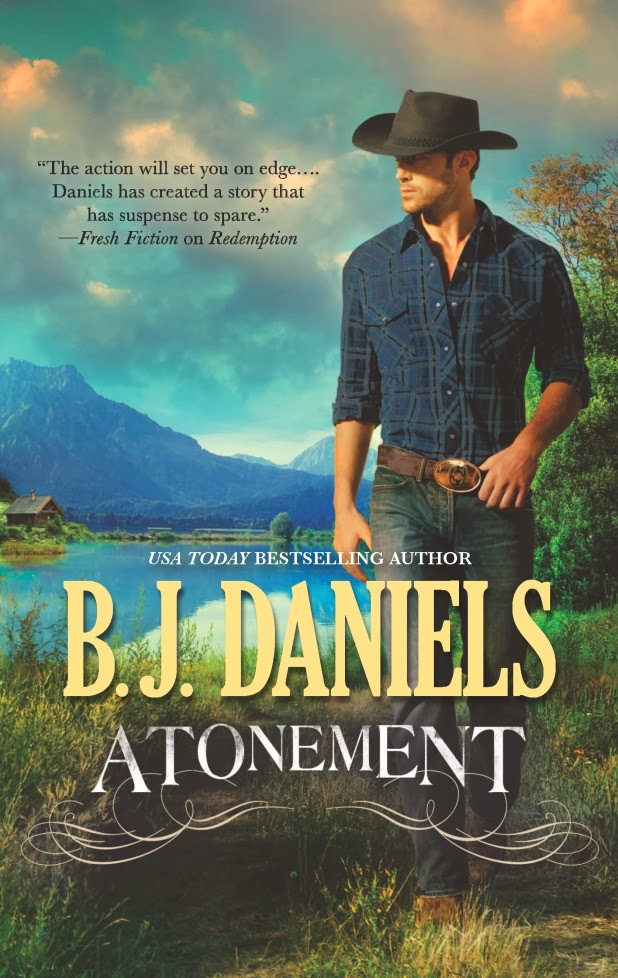 
Just how far are people willing to go to keep their secrets?

Protecting the citizens of Beartooth, Montana, is never an easy job. It's been one year, and Sheriff Dillon Lawson still feels guilty that he couldn't save his twin brother, Ethan. But the biggest test of his bravery comes when Tessa Winters arrives, claiming to be pregnant…with Ethan's baby. At first, Dillon can't decide if this beautiful woman is a con artist or a victim. If Ethan didn't die in that car crash, then where is he—and why is he hiding?

Now, Dillon is prepared to do anything to uncover the truth—anything except admit his growing feelings for Tessa. But with violence threatening, Tessa and Dillon must trust in each other to save not only themselves…but also Tessa's unborn child.

Just how far are people willing to go to keep their secrets?

Read on for a sneak peek of
ATONEMENT
by NEW YORK TIMES bestselling author
B.J. Daniels

One year later, sheriff Dillon Lawson still feels guilty that he couldn’t save his twin brother Ethan. But the biggest test of his bravery comes when Tessa Winters arrives, claiming to be pregnant...with Ethan’s baby.

“You bastard.”
“You’ve made a mistake,” Dillon said.
“The mistake was ever falling for you.”
He shook his head sadly. “I’m not who you think I am.”
“You’re telling me? Put me down.”
Dillon did as she’d ordered and watched her struggle to get her feet under herself. Seeing him had been a shock for her, that much was clear. And yet, she’d come here looking for him as if…
He frowned as he tried to make sense of this. Ethan had been dead a year tomorrow. Why would she think he was Ethan? Not to mention… He stared at her swollen belly. The woman looked as if she might deliver that baby at any moment.
“You knew my brother?” he asked suspiciously.
She had dropped her large shoulder bag. She now bent to pick it up from the dirt before turning to glare at him. “I just want my money,” she said as she slung the bag over her right shoulder.
“Your money? Are you talking about the insurance money?” The check had come only a few days ago. Apparently his brother had taken out a half-million-dollar policy on himself and made Dillon the beneficiary. Ethan had always been full of surprises. This woman was apparently another one.
“Insurance? Is that what you call it? Just give me what’s mine and I’m out of your hair for good,” she said, and glanced toward the mountains as if she couldn’t bear looking at him any longer.
“Why don’t we go into the house?” he suggested. “I think we can settle this easy enough. Just let me get the halter rope off my horse—”
“If you think you can sweet-talk me, you’re dead wrong. And you sure as the devil aren’t seducing me. Not again.” Her hand went to her stomach and he felt his heart drop.
She wasn’t really going to try to convince him that she was carrying Ethan’s baby, was she? He’d never been the brightest kid in school, but this one was a math no-brainer. Even if the woman did look as if she could give birth any moment, his brother had been gone twelve months tomorrow.
“Look, I’m not sure what your story is, but that baby you’re carrying? It isn’t—”
“If you dare say it isn’t yours…” Her right hand dipped into her shoulder bag. An instant later he was staring down the barrel of a .45.

Is this beautiful woman a con artist or a victim, and if Ethan didn’t die in that car crash,
then where is he—and why is he hiding?
Find out what happens next in ATONEMENT by NEW YORK TIMES bestselling author B.J. Daniels!

B.J. DANIELS, a USA Today and New York Times bestselling author, wrote her first book after a career as an award-winning newspaper journalist and author of 37 published short stories. That first book, ODD MAN OUT, received a 4 ½ star review from Romantic Times magazine and went on to be nominated for Best Intrigue for that year. Since then she has won numerous awards including a career achievement award for romantic suspense and numerous nominations and awards for best book. Daniels lives in Montana with her husband, Parker, and two Springer Spaniels, Spot and Jem. When she isn’t writing, she snowboards, camps, boats and plays tennis. She is a member of Mystery Writers of America, Sisters in Crime, Thriller Writers, Kiss of Death and Romance Writers of America.