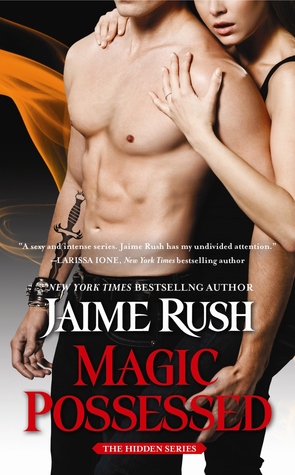 
They are the Hidden.Not quite human. Far from normal. And never, ever safe . . .

TOO HOT TO HANDLE

Her brother was mysteriously murdered with no witnesses, clues-or motives. Yet Violet Castanega knows he won't be the last to die unless she seeks help. But the Hidden's law enforcement won't come to the aid of her rowdy dragon clan, and the only person who will listen to her is one tough cop. Violet has tangled with him before, and it got rough. This time, it's getting hot . . .

TOO CLOSE FOR COMFORT

Powerful Guard member Kade Kavanaugh has been ordered to take out Violet Castanega. While assassination orders don't come with explanations, his instincts scream that killing the feisty beauty is wrong. Now Kade must put his career, not to mention his life, on the line to save her. But as the passion-and the danger-heat up between Kade and Violet, can they survive the darkest magick of all?

Things that go bump in the night have always fascinated Jaime Rush. Sometimes those things are human; other times, not so much. Now she has twisted them all together in the Hidden, a trilogy about humans with the essence of gods who walk the knife's edge between the glamour of Miami and a place filled with dark magick and dangerous beauty.
Jaime is the author of the Offspring series and also writes under the name Tina Wainscott. She is the bestselling author of eighteen romance novels. She lives in Southwest Florida with her husband, daughter, and cat.

And don't miss the rest of The Hidden series!


One year ago, Ellie made the mistake of a lifetime: she fell in love with a man who is a bitter enemy of her people. A Red Dragon shifter, the handsome Kirin was at once forbidden - and irresistible. Now Ellie's mother has disappeared and everyone believes that Kirin is responsible, including Ellie. His dangerous secret endangers her mother and makes Ellie lose faith in love forever . . .
Summoned home when his own father goes missing, Kirin must track down the very man who cost him his chance at happiness. When he discovers that Ellie's father has vanished as well, Kirin knows that he and Ellie must combine his Dragon power with her magick to find the ones they loved and lost.
But as they feel their old desires flare up again, can their burning passion overcome their past - or the danger that the future holds?


After her father falls victim to a serial kidnapper, cunning Dragon shifter Lyra Slade is determined to rescue him. When she discovers a clue to his disappearance that leads her to a sexy but aloof stranger, she knows she shouldn't trust him to help her, but she's run out of options.
Archer Grant, a descendant of fallen angels, is reluctant to aid the beautiful dragon because her evidence implicates his own brother . . . But when his brother also goes missing, Archer must work with Lyra to uncover the truth. But even as a supernatural desire grows between angel and dragon, they are hunted by an evil force. Faced with the deadliest of dark magick, can even love save them?


Ruby Salazaar wants answers . . . and revenge. Her uncle has just been murdered before her eyes and the name he utters with his final breath -  Cyntag - leads Ruby into a world beyond her wildest imaginings. She soon learns that the dark, sexy Cyntag Valeron knows more about her than she does herself.
Ruby changed Cyn's life before she even knew who he was. Now she charges into his life, a beautiful woman full of fire and questions. Cyn knew this day would come, yet he couldn't foresee the danger -  and desires - Ruby would bring with her. He can teach her how to harness her newly awakened powers. But there is one force neither of them can control . . .


Kye knows that her boyfriend Kasabian is in grave danger, investigating a series of kidnapped children. She knows he's pushing her away for her own safety, but she won't let him face it alone.
Kasabian will risk anything to rescue the children, and he has a bold plan to allow himself to be taken hostage by the kidnapper, Silva. While he tries to reason with Silva, Kye is racing again time to discover where the kidnapper is holding him .
If Kye is reunited with Kasabian, will their combined powers be enough? The fate of the Crescents-and Kye and Kasabian's hearts-hang in the balance.


GIVEAWAY:
One reader will receive the full Hidden series, including DRAGON MINE, DRAGON RISING, DRAGON AWAKENED, MAGIC POSSESSED, and ANGEL SEDUCED from Forever (US only, please). To enter, just leave a comment or question for Jaime on this post and then fill out the rafflecopter below!