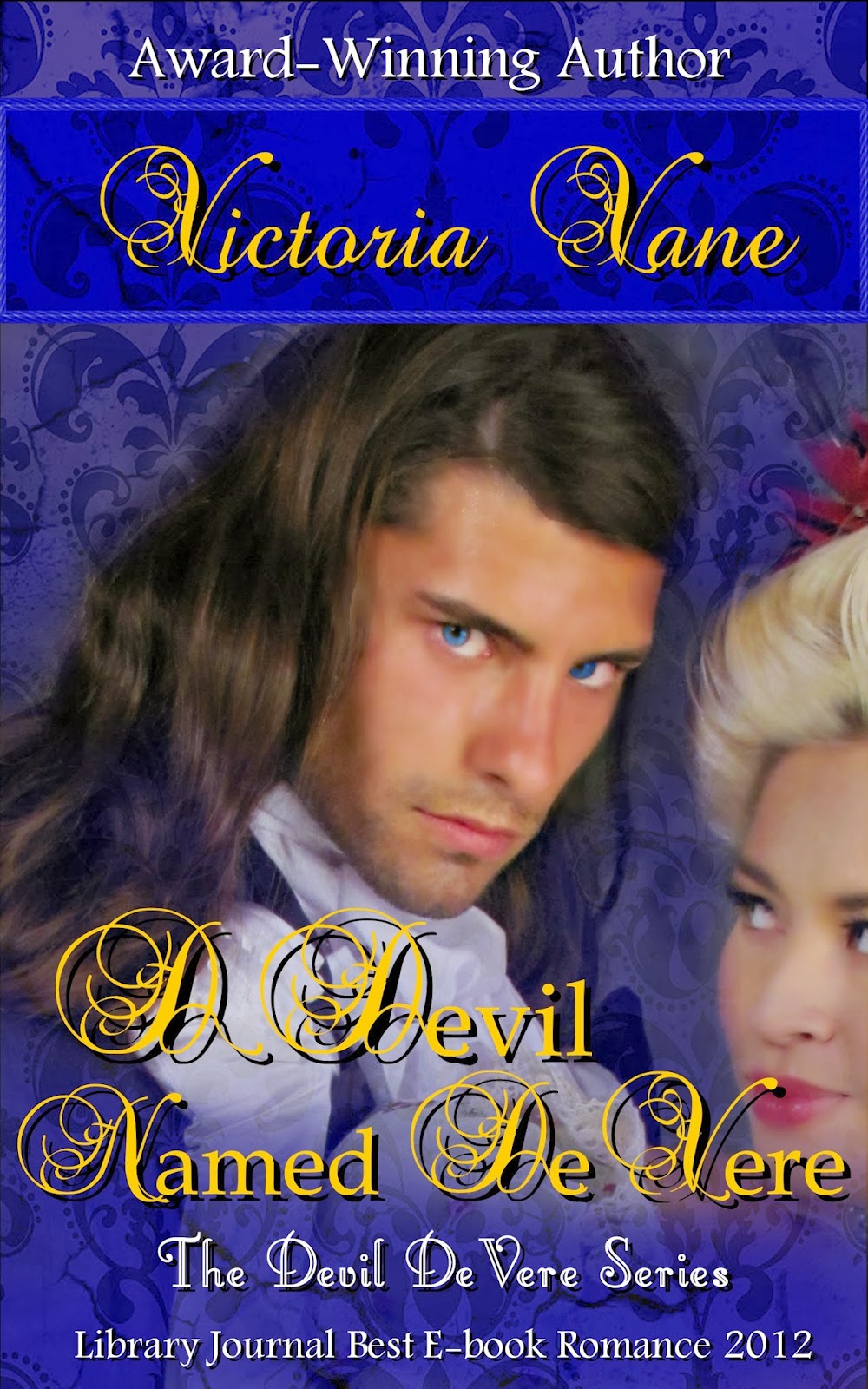 A Devil Named DeVere is a full length compilation of the novellas featuring Diana and DeVere: The Devil You Know, The Devil’s Match, and A Devil’s Touch, with the addition of select scenes from A Wild Night’s Bride and The Virgin Huntress. Part I: The Devil You KnowWhen Ned, Annalee, and her cousin, Diana, arrive at DeVere’s estate for a weekend of horse racing, DeVere makes his interest in Diana acutely known. Diana’s twelve-year marriage is a mockery. She feels unfulfilled and undesirable, making her all too vulnerable to DeVere’s dangerous charm. After events take an unexpected turn, Diana’ most erotic fantasies become reality when she seeks comfort and affirmation in the devil’s arms. Little does she know that the fire he ignites within her will burn long after she leaves Woodcote Park.Part II: The Devil’s MatchFour years later when Diana comes to London as her goddaughter’s chaperone, she desires to avoid her erstwhile lover at all costs. Nevertheless, she has no choice but to appeal to DeVere when Vesta mysteriously disappears. Ludovic’s time abroad has only served to deepen his debauchery. He’s become jaded, world-weary, and bored. He also recognizes that the marks of his discontent have only increased with Diana’s arrival. When she makes her appearance in his den of iniquity in all of her glorious self-righteous fury, he suddenly feels alive again. DeVere is once more hell-bent to have Diana back in his bed, while she will do whatever it takes to bring him to his knees.Part III: A Devil’s TouchIn her last month of pregnancy, Diana, Viscountess DeVere, has barely settled into her new life and role as “the devil” DeVere’s wife, when her increasingly restless husband receives an urgent summons to London. When Diana inadvertently discovers a message he received from a known courtesan with whom he was formerly linked, she fears her marriage is over before it has begun.


Lexi’s Thoughts:
Three parts. Two hearts. One devil.
Victoria Vane is an author who weaves historical romance with plenty of steamy haman. That doesn’t sound right, it’s not just hot baths but charged scenes between a hero and heroine who can’t seem to resist falling in lust with one another.

Don’t fret dear reader, Vane will take you far beyond lust. Ludovic may be the devil, but even the devil is tempted. And he is certainly tempted when he first meets Diana, the very widowed and stunning Diana. This DeVere is bent on scratching an itch so he may move on. He is self serving in a way yet at the same time Vane makes him likable by revealing how honorable he is to those he considers friends and family. For a bit you may not be able to decide if you should loath him and his lifestyle...or fall madly in love with him.

Which is exactly what Diana feels. DeVere ignites a fire within her that she has never felt. Dangerous to play with fire, once you do everything else feels cold. In part one Diana gets burned. Woe to any of you who had to wait to get part two! Then in part two circumstances regarding Diana’s surrogate daughter bring her face to face with the devil who stole her heart.

There is love and loss throughout the book, both for our main characters and others. Vane gives you a bit of a murder mystery in part one, Diana’s husband has a gambling problem and ends up dead. Right before he lost his brains Diana found out a secret about him, but you still can’t be sure who did the lout in. Then in part two Vane cracks open DeVere’s heart and reveals a new depth to this character. How can you not fall in love with this man who is cocky enough to never do anything he doesn’t wish yet give up everything for love. His internal struggle can be felt as you read. Each revelation DeVere has about love and needing one person to fill your life will make you smirk even as he nearly has a heart attack.

The Devil DeVere series is fun and, of course, full of passionate interludes. The rating is very difficult because one can’t help but compare this book to another of Vane’s, The Sheik Retold. Sooooo close to being a four. Can there be a three and one glass minus a few sips rating?

Curious about this devil? Enter for a chance to win Victoria Vane’s DeVere Makeover Giveaway at our blog here! Hurry, ends on the 28th!