Review: Down on Her Knees by Christine Bell - 4 Wine Glasses 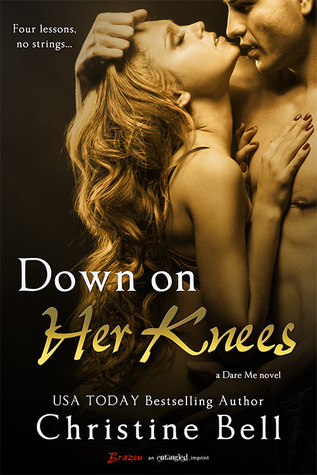 Four lessons, no strings…
Detective Rafe Davenport has always made Courtney DeLollis uneasy. While her instincts whisper, Touch him, her mind says, Run. But since she learned that he’s dominant in the bedroom, she hasn’t been able to forget about it. She should be appalled—she knows all too well what happens when a man has too much control—but a deeper, darker part of her is fascinated...
And so is Rafe. The sexual tension between them is thick enough to touch, and damn, does he want to touch. So he suggests something that will benefit them both. Four scenes—because anything more is a relationship, and Rafe won’t go there ever again. Each scenario is designed to tease and torment. To show Courtney that with every submission comes the reward of scintillating pleasure. But once he has Courtney down on her knees, Rafe realizes that she might be the one woman capable of bringing him to his…

Thoughts:
Ever fantasized about a man in uniform? Or maybe had a little bedroom play with a uniform? Or even just thought it was sexy as hell?! Then Down on Her Knees is the book for you!

Detective Rafe Davenport and Courtney DeLollis may seem like they can't stand the company of each other. But underneath all that antagonism is a sizzling attraction that cannot be denied. Though Courtney tries...oh does she try. She knows from experience what it is like to be with a man that tries to control every aspect of herself. Ever since she found out about Rafe's dominant side though, instead of scaring her off further, she can't stop thinking about giving him that hard won control. And Rafe is not making it any easier for her to deny him. He has been intrigued by the feisty woman with a fetish for killer heels since the moment he met her. So Rafe offers her a deal and dares her to take it. Four scenes, his choice, her submission...and her pleasure.

Christine Bell is one of my must-read authors, especially in the steamy contemporary romance genre. Down on Her Knees is the third book in the Dare Me series, and these ladies can't say no to a dare. A little kink, a lot of romance, this was a hot and exciting enemies to lovers story. Between Rafe and Courtney's sexy banter and toe-curling sex scenes, there was a depth and a history to each of these characters that was masterfully peeled away as the story unfolded. Their friends and past series characters also play big roles in the story, so it was a joy to revisit with them. There were times though that I wanted to smack Rafe around...but maybe he'd like that too much. ;) All in all, Down on Her Knees was a fun and sexy story that I really enjoyed!