We at Reading Between the Wines would like to welcome Tassie to the family! She is trying her hand at reviewing for the very first time, we're happy to have her and are looking forward to watching her grow as a reviewer. We hope that you enjoy her reviews! 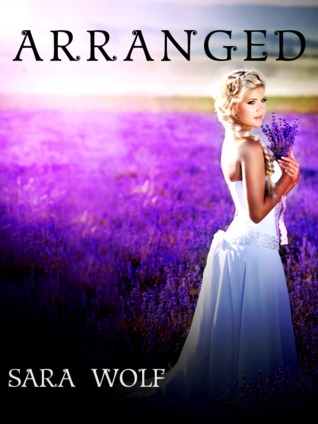 When Rose Jensen’s grandfather dies, he leaves her enough money to save her parents’ failing business and get her through UCLA. The only catch – she has to marry Lee Montenegro, the infuriating half-Spanish, all-playboy transfer. Rose and Lee’s grandfathers were fast friends, and betrothed their grandchildren to each other.
Lee wants the money to run from his suffocating family, and turns his full burning charisma on Rose, but she won’t give in. She’ll never marry someone she doesn't love, and who doesn't love her. But memories of a mysterious boy in her childhood haunt her, and Lee insists they know each other. With her parent’s pressures mounting, her scholarship slipping, and Lee’s advances heating up with more than just money-lust, Rose is torn between doing the right thing for her family, and doing the right thing for her heart.

Thoughts:
Arranged is about Rose and Leo. These two only meet once and that is when Leo is coming out of another girl’s bedroom with only a care bear covering him. To say Rose wants nothing to do with him after that is understatement, even if she does think he’s hot. But after Roses grandfather passes away, it turns out that she has known Leo a lot longer then she thought. Called in for a meeting with her grandfather's lawyer she is surprised to see Leo’s dad and Leo himself there. As it turns out, both older men put in their wills that Rose and Leo must be married for three months to receive an inheritance of $300,000. Both Rose and Leo want the money, but for very different reasons. Leo wants it to get away from being under his father’s control and the family company. While Rose wants the money so that she can finally reach her dream of owning her own bakery and to help save her parents company.

Shortly after Leo and Rose finally decide to give the marriage between them a chance to work, Leo’s ex-girlfriend Kiera shows up to cause trouble... She is the spoiled little rich girl that is use to getting her way, even at the cost of hurting others. She wants Leo again but he wants nothing to do with her, and blows her off.  But she is determined to get Leo back, whether she has to tell lies and hearts are broken in the process or not. Can Leo convince Rose that he loves her no matter what? Or will Rose believe the lies over her own heart?

I really liked this book; it is different from other books that I have read in this genre recently. With all the drama that went on between everyone, it kept me on my toes the whole book. I couldn't wait to see how it everything would play out in the end. I screamed at the end, I just couldn't believe it ended the way it did. I wanted more information than what was given. But after what happened after the hotel, and Leo’s announcement, I found the ending to be lacking. I can’t wait to read book two, and see if Kiera’s plan works out or if Rose’s will get her happily ever after.