Hello lovelies! Boy do I have a special post to share with you for the last day of Jessie Lanes SECRET MANEUVERS blog tour! I was lucky enough to meet some of the EX OPS boys on a super secret mission....shhh...top secret. But I HAD to share and you'll see why soon. But you can keep a secret, right? So this will just stay between us...

“Yo, ho, haul together, hoist the colors high.
Heave ho, thieves and beggars, never shall we die.”

“Really Baker? You’re seriously going to watch that. Like now? With him in the room staring at you?”

I looked up to at my best friend while aiming the remote at the small television to pause it mid scene. “Ummm...I was thinking about it.” I watched Declan roll his eyes to the heavens, well actually to the ceiling, looking as if he was praying for something. But I didn’t think Declan prayed for much in his life, with the exception of the one time a condom had broken with that clingy chick he was about to break it off with. Then the man had prayed morning, noon and night for three weeks straight until he could confirm that she’d gotten her period. The soft sound of a scrape on the floor took my attention from my team member to the other man in the room.

Looking to my left, I refused to start second guessing this mission again as I met the mocking dark eyes of the shaggy brown haired man rocking rustic apparel of ripped jeans and a worn black t-shirt. The hostage’s hands were taped together in front of him, and resting on his lap. His ankles were tied together with Jaxon’s reliable anchor rope that Riley had switched out last week with a frayed, faulty one in an attempt to leave our commander stranded out on a lake somewhere on his upcoming weekend fishing trip. Just a little payback for one atrocious trip to the jungle, that no one ever wanted to repeat.

My nose twitched in irritation. That rope had a bit of an odor to it, but oh well.If this guy was who the lady claimed him to be, and if her accusations were sound, then he could deal with it. The lingering smell of dead fish should be the least of his worries.

Muttering under his breath a little bit that I was becoming more and more asinine as the day progressed, Declan leaned against the conference table and crossed his ankles.  Our hostage looked at me with a knowing grin on his face and just shook his head in disbelief. "By all means," he said. Lifting his tied hands up so that he could point at the television. With no more need for encouragement,I hit play.

With nothing but a few hours on our hands to waste until the trade off, Declan,myself and our hostage, who looked identical to the man on the screen except without all the pirate garb and hat, continued to watch Pirates of the Caribbean At Worlds End.

About forty five minutes into the movie, a knock on the holding room door broke our concentration. “Got it” Declan replied as he hopped of the table and walked the few feet to the door without taking his eyes off the TV. I was so enthralled with what was going on in the movie that when a blurry image of blonde hair reflected on the screen, it took me off guard.

Turning around, I inspected the woman from head to toe.She was a petite blonde bombshell wearing ripped black jeans and a pink tank top with a skull on the front of it. Not exactly typical attire for someone who worked in the CIA. Surprisingly, she was also clearly on her own and unarmed.Which was downright strange for someone who was supposedly coming in to take custody of a man she claimed was guilty of treason and a spy.

“I’m… err… Agent Folk. Yeah. But you can call me Crystal.” Pointing to the man still sitting on the floor all tied up. “Who’s this?” She asked me as I stood up to greet her.

My brow scrunched up in confusion, as did the man in question. Before Declan or I could get a word,the hostage who had spent the last hour tied up in a room with two men from the Ex Ops team who had kidnapped him, and then forced to watch one of his own films, spoke. “The name’s Johnny. And you, I presume, are the reason I’m here love.”

The little, oddly dressed CIA Agent shook her head. “Sorry man, but I think they made a mistake.
There’s no way you’re him. The Johnny Depp. I mean, you don’t even look like him. And clearly your tattoos aren’t even real.”

The three of us looked at Crystal as if she’d just lost her mind and tried to convince us she was Brittney Spears. As my Daddy liked to say sometimes, ‘Something didn’t smell right here’.

“Don’t worry about the mess up though guys, I’ll make sure he gets home.”

Did she just mutter ‘eventually’ after that sentence?

Still trying to make sense as to what was going on here, I stood there watching the woman. Wondering if somehow she had forged those CIA credentials she’d shown us when giving us our mission. While I was studying her, she walked over to a now struggling Mr. Depp, grabbed him by the back of his shirt with both hands, and started to drag him out of the room. The man looked terrified of a woman who was probably at least seventy pounds smaller than himself. And if I were Mr. Depp right now, I think I would be scared shitless too.

Wait. Was that an air kiss she just blew him before petting his head?

Declan and I finally came out of our stupor and scrambled after the pair. Clearly, we had been duped into a crazy fan fantasy,and suddenly I was extremely grateful that the Commander was probably stranded on a lake somewhere.


Some mistakes from the past haunt us forever… unless fate steps in with a second chance.
One ‘dear John’ letter haunts Bobby Baker’s every living moment. It’s the letter he stupidly wrote to his high school sweetheart, Belle, right after he left to join the Army. The letter that he told her that he wasn’t so sure if they were ready for forever yet. But before he can let her know that the letter, and his second thoughts, are nothing but a mistake, she up and disappears from the small Georgia town they were both raised in.
Fifteen years later, Belle unknowingly walks back into Bobby’s life when her job as an ATF Agent forces her to work with a group of men secretly headed by the CIA to help her track down whoever is involved in funneling black market weapons to a drug cartel in Mexico.
Bobby will use this mission to try and soothe Belle’s hurt feelings while proving to her that their love is still meant for forever. He’ll use every dirty trick he’s learned since he joined the Army to maneuver her back into his life for the long haul. But Belle’s not making it easy as she keeps him at arm’s length in the hopes that mistakes of her own never come to light.

Crystal and Melissa often live half their lives with their heads in the clouds dreaming of alpha military hunks, werewolves and kick ass heroines crazy enough to chase after creatures that they unquestionably should know better than to chase.
Their first YA novel, The Burning Star, was released in May 2012. Big Bad Bite is their second novel, but their first adult paranormal romance. They are now working on their next two novels, Walk On The Striped Side and Secret Maneuvers. With these projects underway, they are looking forward to showing the rest of the world their crazy stories, heroes and heroines that often plague their minds until written, and hope you will join them on their journey! 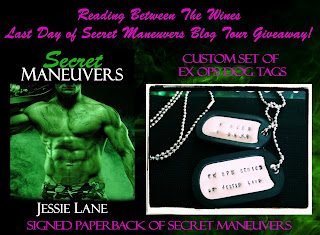 It’s the middle of summer and we decided to crank things up a notch with a HUGE giveaway!!!

There are LOTS of chances to enter on this giveaway!  All of the authors participating are giving 5 EXTRA ENTRIES for every person that follows them on Twitter or likes their Facebook page!!!