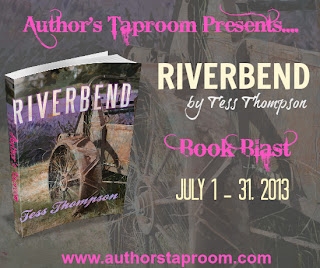 Today we would like to share with you a  contemporary romance from author Tess Thompson. Check out the book and excerpt below and then be sure to enter the giveaway and check out the other blogs participating in this book blast! 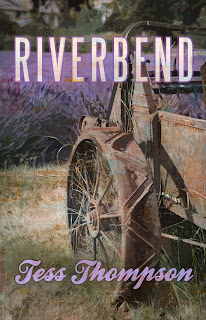 
“Tag. I found you.”Just as Annie Bell’s reputation as one of the best chefs in the Pacific Northwest grows to new heights, she receives athreatening phone call from her abusive ex-boyfriend. Marco is out on parole and hungry for revenge, blaming her for his ten-year imprisonment. Fearing for her life and that of her young son, Annie reluctantly accepts help from Drake Webber, a cold and wealthy recluse hiding a dark history of his own. Supported by the gang of misfits from their restaurant Riversong, Annie forges ahead despite her growing terror that Marco will appear at any moment and make good on his threats.Author Tess Thompson (formerly known as Tess Hardwick) reunites the colorful cast of endearing small-town characters from her bestselling novel Riversong and takes you on a journey that will renew your faith in love, friendship and the power of community – even in the face of seemingly insurmountable grief and fear. You’ll find yourself once again cheering for the residents of River Valley, especially the big-hearted and compassionate Annie Bell.
Escape with a blend of love, laughter, friendship, suspense and gourmet food while remembering it’s never too late for second chances.

Marco’s knife glimmered in the light as he brought it to her neck. Tag, I found you. Annie awakened right at that moment, screaming. The clock read 2:12 a.m. She lay there for a moment, staring into the darkness. Then, breaking through the silent night was the sound of the coyote’s howl. In the next moment, it was silent, not even a cricket chirping or a breeze rustling pine needles. She went to the window, pulling back the shade. In silhouette, near the rose garden, under a full moon, stood the coyote. The summer night was still, the stars close. As she had before, she put her hand upon the window. The coyote turned and looked at her for a moment. She met his gaze, her other hand over her heart, before he loped into the trees, disappearing into the purple forest.

She crossed the sitting area and opened the door to the hallway. Alder’s room was dark, as was the one with the music. But a light shone through the crack between the floor and the door of what she now thought of as the billiard room. She stood, listening, but heard nothing. After a moment, she crossed the hallway and let herself quietly inside Alder’s room. He was asleep, his face peaceful in the moonlight that filtered through the window.

In the hallway once again, she hesitated. Unable to explain why, she moved towards the strip of light. Once there, she put her palm on the door, just as she’d done on the window only moments before. She heard footsteps coming towards her but she remained, despite all the reasons to flee.

“Annie,” came Drake’s voice behind the door. “Are you all right?” She heard what sounded like him sitting down on the floor—a plopping sound and a sigh. The door shook slightly. Perhaps he was sitting against it?

“Yes.” She hesitated, tugging at the collar of her damp pajamas. “No. Another nightmare.” She slid to the floor as well, leaning against the door with her back. Could she feel the warmth from his body through the wood? Pure imagination, of course, but still she could not shake the image of him on the floor with his legs spread out before him instead of cross-legged as she was. “Did you sleep at all?”

“Some, yes.” Silence, before the door moved slightly. Perhaps he was adjusting his position? “Then a nightmare. I hope I didn’t wake Alder.”

“I checked on him. Fast asleep. Always, like a rock.”

“Did you ever read him the story about the donkey that makes a wish that turns him into a rock?”

“Oh, yes. Sylvester and the Magic Pebble. One of Alder’s favorites.”
There was silence from the other side of the door for a long moment. And then Drake’s voice, with the same lonesome quality of her friend the coyote, only soft instead of a howl. “Don’t you wish it were true?”

“What’s that? A magic stone to make wishes come true?”

“No. That people lost to you could come back.”

“Yes, that would be good,” she said, an ache at the back of her throat. Who would he bring back? His mother? “I once heard this famous actress interviewed on Oprah say the meaning of life was loss. That always stuck with me because it made me want to cry out, no, it can’t be loss. It’s love. Surely it’s love.”

“With love comes loss. Whether it’s today or years from now, eventually we all have to leave one another.”
“It’s true.”

The door shifted. “I’m so tired. But sleep doesn’t come.”

“Do you want me to make you something? Warm milk, maybe? I could put a shot of whiskey in it.”

“Nothing works. I’ve tried it all.” There was another long space of quiet. “Now, please, you must go back to sleep. I’ll see you in the morning. Okay?”

“All right. Good night then.”

She got up from the floor and went to her room. But she didn’t sleep for at least an hour, thinking of Drake and his wanderings. What did he do behind the closed doors of the secret rooms? How could she help him? Perhaps there was nothing to be done? But how she wished there were. Finally, she fell asleep.

Tess Thompson is a novelist and playwright with a BFA in Drama from the University of Southern California. In 2011, she released her first novel, Riversong, which subsequently became a bestseller. Like the characters in Riverbend, Tess is from a small town in Oregon. She currently lives in a suburb of Seattle, Washington with her two young daughters, Emerson and Ella. She is inspired daily by the view of the Cascade Mountains from her home office window.


Giveaway:
The publisher is offering One eBook of Caramel and Magnolias by Tess Thompson, along with an exclusive pre-release eARC of her upcoming release Riverstar (note: this might not be available to send out until early August) to one reader. To enter, just fill out the rafflecopter below. Good luck!