Have you read Dee Davis' romantic suspense series, A-Tac? It is one of many sitting on my TBR shelf!  If you are a fan, or if you are new to the series, we have a great excerpt from Dee's recent release, Dire Distraction. You'll want to add it to your TBR list for sure after this! 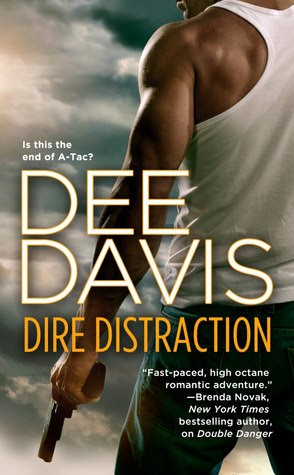 
As the commander for A-Tac, a black-ops CIA unit masquerading as Ivy League faculty, Avery Solomon is the best of the best. He'll stop at nothing to ensure the safety of his team, but when a mystery from the past resurfaces, he puts himself directly in the line of fire.
PUSHED TOO FARAfter years of covert missions, Avery harbors regrets that continue to haunt him. He still blames himself for his wife's death fourteen years ago-until an A-Tac operative finds a photo that suggests Avery's wife may still be alive. Determined to discover the truth, Avery heads deep into the hostile territory of Southeast Asia, ready for danger and violence-only to find himself captured by desire . . .
Wilderness guide Sydney Price never backs down from a challenge. She has her own reasons for wanting revenge against the men being hunted by Avery. Though she tries to deny her attraction to the tough, handsome warrior, the spirited Sydney soon finds him impossible to resist. Now she and Avery must work together to uncover the truth-and stay alive. But as the enemy closes in and old secrets unravel, the line between partners and lovers vanishes like mist in the jungle . . .

Avery took a sip of his beer, turning his attention to the TV. The first Angels batter was up with C.C. Sabathia on the mound for the Yankees.
Behind them, the doorbell rang.
“Harrison,” Nash said, shooting a sideways glance at Drake as he bit into a burger. “Told you he’d be here.”
“It’s open,” Avery called. C.C. threw a curve ball for strike three.
“Sorry I’m late,” Harrison said, something in his expression sending alarm bells jangling. “I sort of got sidetracked.” He held up a mangled looking black box, his eyes telegraphing regret.
“Dude, you’re not supposed to be working,” Drake protested. “The Angels are playing the Yankees. Where I’m from that’s almost sacrosanct.”
“Big word, Drake,” Nash said, turning to look at Harrison, his eyes narrowing at the sight of the black box in Harrison’s hand.
Apparently Avery wasn’t the only one to sense something was up.
Never late for the party, Drake swiveled around, looked first at Harrison, then at Avery and then back at Harrison again, the game forgotten. “You’ve pulled something off the drive.”
The mangled hard drive had been recovered in an abandoned terrorist encampment in Afghanistan. A-Tac had received intel about the possibility of a Consortium-funded operation, but when they’d arrived, the camp had been abandoned, everything of consequence removed or destroyed.
Except for a notebook that had helped them stop an assassination attempt. And the remains of the hard drive. Avery hadn’t doubted for a minute that if there was recoverable information, Harrison would find it. But he’d also been fairly certain that there wouldn’t be anything left to find.
Clearly he’d been wrong.
“I’m sorry,” Harrison said. “I know the timing sucks.” As if to underscore the sentiment, the solid swack of bat-meeting-ball echoed through the room, but nobody turned to look. Not even Drake. “But you’re going to want to see this.”
Harrison’s gaze locked with Avery’s, and suddenly he wasn’t all that certain he wanted to know. But there was nothing to be gained in putting off the inevitable. Whatever the Consortium had in store for them next, he was ready.
“Okay then,” Avery said, switching the TV off with the remote, then pushing the burgers out of the way as they all gathered around the table, “what have you got?”
“It’s a little startling.” Harrison paused, clearly searching for the right words. “And kind of personal.” His gaze met Avery’s. “You might want to hear this on your own.”
Avery shook his head, crossing his arms over his chest. “We’re all family here. So tell us what you’ve found.”
Harrison hooked the box up to his laptop and hit a key. A woman’s face filled the screen. Her dark hair curled around her face, brown eyes glittering with some unshared emotion, her generous mouth giving nothing away.
Avery’s heart stopped. His breath stuck in his throat. And he felt as if someone had just kicked him in the gut.
She was dressed in fatigues, standing next to a bearded man leaning against a table, his hand resting intimately on her knee. “Sweet Jesus,” Avery said, the words strangled. “This was on the back-up drive we found in Afghanistan?”
“yeah.” Harrison nodded, his face filled with worry. “I was just as surprised as you are.”
“Is that?” Drake said, turning to Nash who was staring open-mouthed at the photograph.
“Yeah.” Nash nodded. “Martin Shrum. Avery’s old partner. From before A-Tac days. And Evangeline, Avery’s wife. But I thought she was—”
“Dead,” Avery finished, emotion cutting through him as he caressed the ring he wore on his little finger. “She is. For almost fourteen years now.”
“Yeah, well, Avery, there’s more.” Harrison clicked the picture so that it zoomed in and then moved it so that they could better see the table behind the two people. “Look at the wall.” He enlarged the picture again.
“It’s a calendar,” Drake said, stating the obvious.
Avery’s blood ran cold, his eyes reading the date, his mind trying to process the seemingly impossible.
“Holy shit,” Drake continued, his incredulity only adding to the surrealistic horror of the moment. “It’s dated December of last year.”

Dee Davis has a BA in Political Science and History, and a Masters Degree in Public Administration. During a ten-year career in public relations, she spent three years on the public speaking circuit, edited two newsletters, wrote three award winning public service announcements, did television and radio commercials, starred in the Seven Year Itch, taught college classes, lobbied both the Texas State Legislature and the US Congress, and served as the director of two associations.
Her highly acclaimed first novel, Everything In Its Time, was published in July 2000. Since then, among others, she’s won the Booksellers Best, Golden Leaf, Texas Gold and Prism awards, and been nominated for the National Readers Choice Award, the Holt and two RT Reviewers Choice Awards. To date, she has written twenty-two novels and five novellas…and A Match Made on Madison.
She’s lived in Austria and traveled in Europe extensively. And although she now lives in Connecticut she still calls Texas home.http://www.deedavis.com/

~*GIVEAWAY*~
The publisher is giving away one digital copy of the book via NetGalley to one reader. To enter, just fill out the rafflecopter below. Good luck!