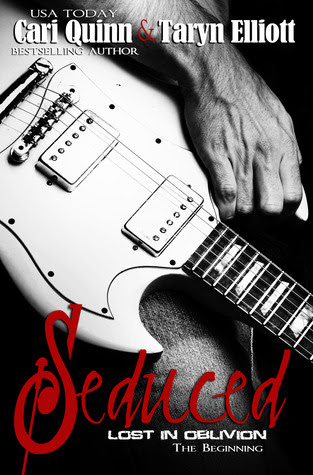 A PREQUEL to the NA rock star series Lost In Oblivion.
Warning: get ready for a testosterone overload. The guys are in the driver's seat in Seduced - and the ride's gonna rock.
Twenty-three year old Nick Crandall has one focus in his life: Oblivion, the band he formed with his best friend Simon Kagan. With gigs coming up and the band members lacking focus after losing their drummer to rehab, they're out of ideas. Until Oblivion's bassist, Deacon McCoy, poses a surprising suggestion.
Bring in someone new. Two someones.
One You Tube video gone viral later, Oblivion is poised on the brink of stardom. With their new hot drummer chick — who comes in a package deal with a talented guitarist who happens to be head over pick in unrequited love with her - it seems like everything's falling into place. Or will the band Nick and Simon have fought to keep together disintegrate before their eyes?
Four guys & one woman + more success than they ever bargained for = trouble, of the sexiest kind.
Get Seduced by this novel-length introduction to the band Oblivion. This preview occurs before the four forthcoming books about each of the band members. Sometimes getting lost means finding yourself...

Seduced is the full-length prequel to the Lost in Oblivion series. A series centered around the sexy and talented rock band, Oblivion and it's five members. But in Seduced, this band hasn't reached their fame yet and with their drummer in rehab, their singer loosing himself in alcohol and women,  and their guitarist and song writer struggling with his own inner demons, spirits are down and tempers are high. Deacon, the pacifier of the group and bassist, is not going to stand for failure though. Risking upsetting their temperamental guitarist Nick, he introduces two new members; the brooding Gray and pixie-like Jazz. Is this the beginning of the end for Oblivion, or is it the beginning of something amazing?

Gray, Nick, Jazz, oh my! Seduced is a full and poignant story that introduces readers to Oblivion beautifully. Gritty, raw and unique, you'll be so wrapped up in the story that you'll feel as if you are standing in the middle of it all!

Seduced sets the stage for the entire series and it looks like it's going to be one hell of a ride! It was a bit slow to start but a few chapters in the pace and the energy really picked up.  Bursting with insecurities, fears, lust and jealousies; if you're looking for pretty, privileged rock stars then this is not the story for you. Oblivion is sexy and intense and real. The dynamics of the group is filled with drama and I can't wait to peel back the many layers of each member in their own books! It will be interesting to see how they adapt to fame and fortune.

With the multi-character point of views you get to see the story from mostly Nick and Simons view, which I loved because you see the inner workings of these characters and how they interact outside. The transaction between characters flowed well at times, while other times it was a bit bumpy, but it never distracted from the story. I also applaud the authors for their note at the beginning of the book so there are no surprises for readers. I wish a lot more authors would do this. I'm looking forward to more from this duo and their intriguing cast of characters! Especially the triangle of Jazz, Gray and Nick...I must know how that turns out!