B. Kristen McMichael's THE LEGEND OF BLUE EYES (Guest Post/Giveaway) 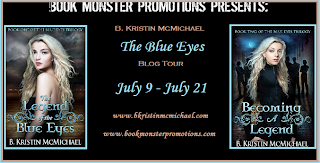 Happy Friday-Eve Lovelies! Today I would like to welcome B. Kristen McMichael joining us with The Legend of the Blue Eyes!


Introducing the characters of The Legend of the Blue Eyes

First off our heroine-protagonist is Arianna Grace. She thinks she is an orphan, until she finds out that she has family, they just all were hidden. She had been kept from everyone for her own protection. She is the child of the night human version of Romeo and Juliet- her parents crossed lines that got them killed for their love. Arianna is a confused sixteen-year-old. While she initially comes off as a little weak, she is trying her best to navigate a world she never knew existed- a place where night humans live and feed off of day humans regularly. On top of all her confusion of the new world, she finds out she is not just one, but two night humans mixed together. Everything changes almost instantly around her and she has to find a place in the new world while dealing with three men trying to woo her at the same time. Life is rough for someone that wasn’t exactly prepared for what fate has ready for her.

Devin Alexander is the protector of Arianna. His job is to see that she survives. He is a day human raised by the night human breed dearg-dul. He knows how they work, what they need, how their society functions, and how to kick butt when needed. He is very closed off and more the silent type. While he loves Arianna, his duty comes first and foremost.

Turner Winter is a free spirit lycan that knows Arianna from her past also. He is second in line behind his brother to rule over the lycan and never expects the day to come that they will need him. He prefers to find his own way in the world- which he hopes includes Arianna. He is the first to offer to be her keeper and will do just about anything to make her happy.

Andrew Lucan is a night human baku (think big, strong, and scary). He is mortal enemies with the dearg-dul. He cannot see eye-to-eye with Devin and will always view him an enemy. Andrew is a very powerful baku and has a great draw to Arianna. Their connection for now is more physical than anything, but neither are exactly sure why they feel so passionate about each other.

Arianna Grace liked her boring, Midwestern, teenage life where she ignored the many unanswered questions of her childhood. Why were her parents dead? Why did she not have family? Where was she raised until she was five? When someone offers to explain it all, Arianna thinks she’s just getting answers. Instead, she is thrown into a world of night humans who drink blood.
On Arianna's sixteenth birthday, her world is thrown upside down when she changes into a vampire. Night humans, or demons, as some call them, live in normal society. Learning all of the new rules of a world she didn’t know existed might be hard enough, but it's further complicated by two former-friends that now want to help her take her role as the successor to her grandfather.
There is a war going on between the night humans. Sides have been taken and lines are not crossed. Four main clans of night humans are struggling for control of the night. Divided into two sides, clans Baku and Tengu have been at war for centuries with the clans Dearg-dul and Lycan. That is, until Arianna Grace finds out the truth; she’s the bridge of peace between the two sides. But not everyone wants peace. With the night humans divided, Arianna is now a pawn in the war between them. She must choose a side—her mother’s family or her father’s—and for once in her life, decide her own fate. 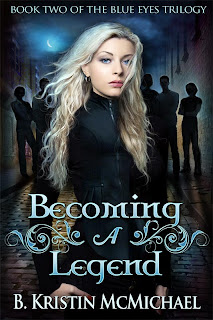 
Arianna Grace is about to turn seventeen, and her life has been very complicated lately. She is the leader of four clans of night humans: dearg-dul, baku, tengu, and lycan. While the four clans seem to get along better with each other, there is internal conflict on both sides of her family, not to mention the three boys vying for her attention. Devin is set on keeping her safe above all else. Turner’s goal is to make her happy. And Andrew wants her for himself. At some point Arianna will have to choose between them, but first she needs to survive the plots against her.
Edward Lucan is making a chase for the power to lead the baku clans and is playing his cards by using his nephew Andrew to lure Arianna into a trap. Unfortunately for Lucan, Andrew has his own plans. He has spent the last year waiting for Arianna to see him as more than a friend, and he now finds it necessary to make a move for her affection, despite his uncle.
In the dearg-dul estate, Arianna discovers that the ambitious Lord Seeger has been laying his own strategies for power and is slowly poisoning her. After getting away with her grandfather’s murder, he is setting his sights on her. Luckily for Arianna, her team is on to all of the plans and is making their own counter strategies. Will it be enough to keep Arianna safe? Several people close to Arianna have been keeping secrets. If Arianna is to take power and control of the night, she will need to know the truth. Will someone finally tell her what it really means to become the legend everyone is waiting for, before it is too late to turn back?


Originally from Wisconsin, B. Kristin McMichael currently resides in Ohio with her husband, two small children, and three cats. When not doing the mom thing of chasing kids, baking cookies, and playing outside, she is using her PhD in Biology working as a scientist. In her free time she is hard at work on multiple novels; as each day passes, she has more ideas for both current and future novels.


TOUR GIVEAWAY DETAILS:
GRAND PRIZE:   Autographed paperbacks of  Books One and Two with Necklace.
2ND PLACE:  autographed paperback of any one of B. Kristin's books (winners choice of book).
RUNNERS-UP:  Two (2) runners-up will each receive an eBook of book 1 "THE LEGEND OF BLUE EYES". (If winner already has book 1 then it can substituted for book 2.)

*This is a giveaway sponsored & administered by the author, publisher and/or blog tour company. Please see our OFFICIAL GIVEAWAY RULES.
a Rafflecopter giveaway

7/11- Reading Between the Wines
http://www.readingbetweenthewinesbookclub.com/