Welcome to the Dissolve tour, a novel by by Andrea Heltsley. We have the first chapter of Dissolve for you to check out here, enjoy! 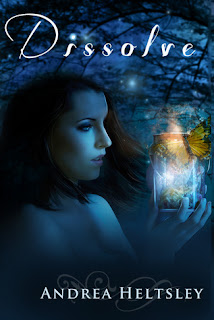 Everything seemed to be going right for Cora. She had a wonderful fiance, a great best friend and a fulfilling life. One day, a tragic event caused that life to crumble around her. She turned to her best friend in her time of need. They embarked on a search for answers, delving deeper into a web of magic and destruction. The closer they got to the truth, the more questions they had. To Cora, magic was the stuff of fairy tales. Immersed into a very different kind of world, the real storm was just beginning to take hold.


I am a biology nerd who loves reading just about anything paranormal and some chick lit. I enjoysunshine and my two Italian greyhounds with my husband. I always write to music, it helps the creativeprocess. Dissolve is my first novel. I have been writing ever since I was in grade school and have finallydecided to make a career out of it. More books to come summer 2012 and 2013.