On June 15, 2012, Entangled Publishing will launching a new line of romance, the Dead Sexy Collection.  These will be romantic suspense, mystery and thriller novels. Check out some of the titles below that will be released next Friday!
More about DEAD SEXY’s Launch Titles...
Her Forgotten Betrayal, by Anna DeStefano
Remembering will save her life. But will the truth destroy their love forever?


When the CEO of a global technology empire retreats to her ancestral mountain home to heal from a brutal shooting, she discovers the danger has just begun. The FBI suspects her of selling top-secret government research, and has sent an undercover agent to find evidence of her treason. Still suffering from amnesia, she is at the mercy of nightmares that soon morph into something much more terrifying—a determined enemy, plotting to make sure she never regains her fragile memory. When a handsome stranger sweeps in from the cold, claiming to be her protector—and her former lover—she suspects he’s not telling her the whole truth about his sudden appearance on the mountain. As their unwilling attraction blossoms to sizzling passion, she begins to trust him…unaware that he is about to repeat the most painful betrayal of her past—a past she doesn’t remember…a past that just may kill her.

No Hero, by Mallory Kane
A darkly handsome New Orleans detective who insists he’s no hero is blindsided by his one-time lover, a sexy investigative TV reporter, who exposes his secret troubled past to the whole world…and nearly costs him his job. When the at-risk teens he mentors start turning up dead, his vow to protect the other kids hits a major snag…his only clue to finding the determined killer is held by the one woman he never wants to see again. Compelled to work together to solve the vicious murders before another child dies, their passion reluctantly reignites, and their mutual mistrust slowly turns to respect as she realizes there’s much more to being a hero than outward appearances, and his deeply wounded heart gradually opens to the possibility of love.


Sacrifice of Passion, by Melissa Bourbon Ramirez
A tall, dark, single-dad Texas rancher finds himself facing more than his stubbornly silent son when the chupacabra, a supposedly mythical blood-sucking beast, starts killing his livestock—and stalking the town’s newly returned veterinary assistant, the sensual woman who ran from the altar and broke his heart twelve years earlier. Determined to purge his sizzling memories of her from his all-too-vivid imagination, he seeks her help to get to the bottom of the disturbing animal mutilations, only to have her break through to his sullen son…and rekindle the love he’d thought was lost forever. But her refusal to share a terrible secret sends her running straight into the lair of the chupacabra, plunging her back into her worst nightmare, and forcing them both to confront the wrongs of the past—in order to stay alive for the future they desperately want. 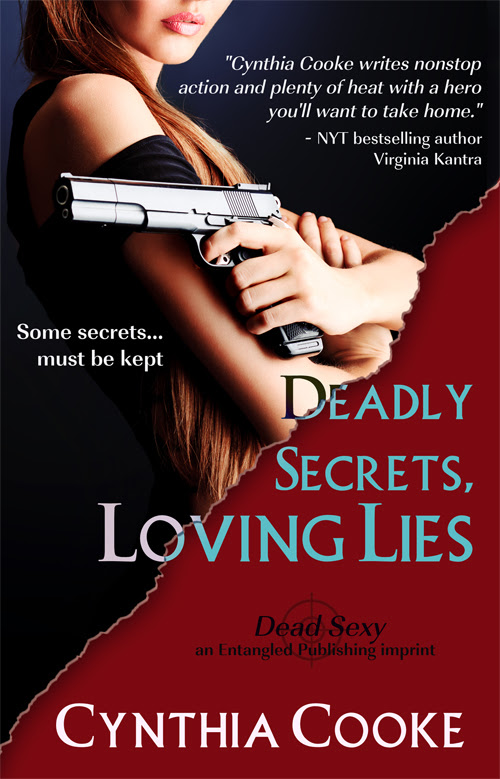 Deadly Secrets, Loving Lies, by Cynthia Cooke
Family secrets must be kept, and painful wounds must be ignored.


After an all-out assault by a vicious terrorist bent on destroying her entire family, a former government agent must break the strict rules she has always lived by when she emerges from hiding to reluctantly accept the help of her all-too-sexy ex-lover. Running a deadly race against time, they rush to rescue her kidnapped sister, find her missing father, and bring the notorious villain to justice. But nothing ever goes as planned. Bullets fly, danger abounds, and their passion reignites even faster than the lies are flowing. But their stubbornly held secrets just might spell the end of their rekindled love and hopes for the future…as well as their very lives.


Check this out!
Entangled Publishing is giving away a Nook Simple Touch to celebrate, just fill out the rafflecopter below or visit their site: http://www.entangledinromance.com/2012/06/26/were-giving-away-a-nook-simple-touch-to-celebrate-the-launch-of-dead-sexy-books/
a Rafflecopter giveaway