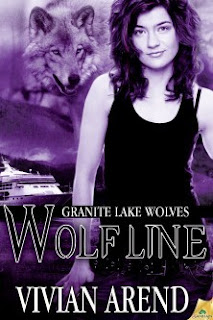 
Into the best-laid plans a little chaos must fall…
Jared’s not sure how his quiet morning coffee near the harbour ended with him on a cruise ship impersonating one of his pack mates. Well, it might have something to do with a woman, but who can blame him? The female of the species was made to love, and he’s more than willing to share his considerable skills in that area. Especially since he figures the chances of meeting his own one-and-only are slim.
Keri Smith is positive the last-minute recruit sneaking aboard the Arctic Wolf Cruise Lines tour is her mate. Ix-nay on confirming that, though, at least for the next ten days. She’s promised her best friend to be overall troubleshooter for the shifter-only cruise. Getting tangled up in mating lust would reduce her skills to nil. Avoidance of the sexy wolf for the duration of the cruise, followed by jumping his bones, seems the logical solution.
But when libidos are on the line, “logic” and “wolves” don’t go together. Throw in suspicions of wrongdoing, and these two virtual strangers will need a lot more than luck to find their way through to forever.
Warning: Really? You need to be warned about the hot nookie and sarcasm? Yeah, it’s in here. Also colourful cat shifters, lupine royalty, and wild adventures in cabins like you’ve never seen before.


Wolf Line is another hit for Arend. Book five brings everything you expect from the Granite Lake Wolves series; a little mystery to solve, tons of humor, and sexy shifters. It is refreshing to read about two people finding their other half without all the drama and huge hurtles to overcome. There are things they need to work out and plenty to learn about each other, but it is a relationship that feels like you are watching your best friends find love.
Jared is the easy going ladies man of the group. He has a secret, well...a couple of them actually. You will fall in love with him from page one and that makes it all the better to see how completely he falls for his mate. And yeah she finds out his secrets, isn’t that what mates do?


Keri is also a fun character to read. She wants to be a good employee/help to her friend on the cruise, but her darn hormones (and her wolf) just wont let that happen! You can’t change the beast. And why she would want to is beyond, Jared is pretty perfect if you overlook the one hangup that tarnishes his golden glow. But once Keri figures out the truth she might just wish her brain had stayed out of the way and let her hormones rule the day.
Wolf Line is a perfect summer read. Fast paced and loaded with events that will make you laugh it will be over before you want it to be. That is OK though, since it is book five you can start over with book one and relive all the crazy antics of these sexy shifters.