Review: The Slayer by Theresa Meyers 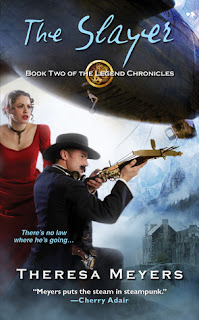 
Brothers Winchester, Remington, and Colt know the legends—they were trained from childhood to destroy demon predators, wielding the latest steam-powered gadgetry. It’s a devil of a job. But sometimes your fate chooses you…Chasing Trouble
Winn Jackson isn’t interested in hunting nightmares across the Wild West—even if it’s the family business. Unlike his rakehell brothers, Winn believes in rules. As sheriff of Bodie, California, he only shoots actual law breakers. That’s what he’s doing when he rescues the Contessa Drossenburg, Alexandra Porter, a lady with all the elegance of the Old World—grace, beauty and class. And then he sees her fangs.
Alexandra isn’t just some bloodsucking damsel in distress, though. She’s on a mission to save her people—and she’s dead certain that Winn’s family legacy is the only way. Luckily, aside from grace and class, she also has a stubborn streak a mile wide. So like it or not, Winn is going to come back with her to the mountains of Transylvania, and while he’s at it, change his opinions about vampires, demon-hunting, and who exactly deserves shooting. And if she has her way, he’s going to do his darnedest to save the world…

Goodreads
Purchase at Amazon, Barnes & Noble, and The Book Depository


Western romance combined with paranormal and steampunk. A lot to be thrown together but Meyers balances each genre well and still keeps the action moving.
Winn is everything old west, right down to his mustache that he twirls around his finger. For some reason Josh Holloway with a long mustache is the image that is conjured up for Winn. Maybe it is his looks, imagine him in cowboy gear, or the way Winn talks, think sexy drawl. Whatever the reason not a bad image to have for the hero.

Winn and his brother are the Chosen, though Winn will deny the fact. He has hunted demons and hates vampires, so it is an ironic twist that he is forced to work with one. Alexandra is the beautiful bloodsucker he gets stuck with, though after being around her even Winn has to admit she is different. Alexandra is no more thrilled with the situation than Winn, though for her it is because his kind has killed nearly all of her family. So does she feel a little alone? Yes, and maybe when she realizes Winn is not exactly like the other hunters she knows she will realize her days alone could be numbered.
The first half of the book was a little difficult to get into. The action was there, the book starts out with a stagecoach robbery. And the characters are put together nicely, Winn and his western charm and Alexa with her sophisticated allure. Maybe the steampunk elements weren’t enough, though there are some great weapons made by Sir Turlock. And it wasn’t for lack of impending doom, a big bad demon wanting to get his hands on “The Book” equalling end of the world stuff.
Whatever was missing in the first half clicked once Alexa was taken. No more will be said about that, don’t worry no spoilers. Once this event happens Winn and Alexa’s deep feeling are felt. The end of The Slayer bumped the rating from a two up to a three. Now lets just hope that book three has a little more steampunk!