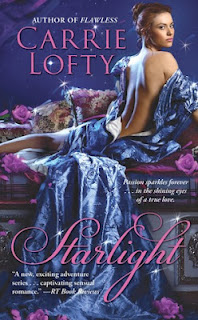 
Passion sparkles forever . . . in the shining eyes of a true love.
An esteemed astronomer, Alex Christie, the eldest and most steadfast of the Christie siblings, has never possessed his late father’s ruthless business drive. But to protect his frail infant son from his cruel father-in-law’s bid for custody, the young widower must undertake Sir William Christie’s posthumous million-dollar challenge: to make a Glasgow cotton mill profitable. At sea in an industrial world of sabotage and union agitation, Alex meets Polly Gowan, daughter of a famed union leader, who hopes to seize a mysterious saboteur without involving the police.
Because a sympathetic mill master would aid her cause, Polly becomes Alex’s guide to urban Scotland. From soccer games to pub brawls, Alex sees another side of life, and feels free for the first time to reveal the man—vital and strong—behind his intellectual exterior. Polly is utterly seduced. Their ambitions, however, remain at odds: Alex vows to earn the mill bonus to save his child, while Polly fights for the needs of her people. Is there strength enough in their sparkling passion to bind them together in their quests—and in a lasting love that conquers all?

The Christies, one of those families that on the surface may have appeared to have it all put together. The tough father, loving mother to all (even those not biologically her children), the siblings all legitimate one way or another, and wealth.  As with every family there are stories hidden and feelings kept in the dark.
Starlight brings revelations and love to Alex Christie. Alex sets out to make the mill that his father has left in his hands profitable, a mill that is struggling nearly as much as the young woman Polly who works there. Alex meets Polly and despite the circumstances is thrown by her beauty and confidence. For the first time in his life he experiences strong attraction, nearly strong enough for him to forget his young son and what he has set out to accomplish.


Lofty’s writing brings the places and characters to life immediately. You feel Alex’s concern over his son and his desperate need to protect him from his late wife’s father. Polly’s strong convictions on working conditions and fairness are enough to make you want to stand and cheer, and cry in outrage at the actions of Alex and the other mill masters. The other colorful characters help round out the story mostly by adding more fuel to the fire.
Despite the many obstacles in their path Alex and Polly give into each other, beautiful and fiery. As the saying goes, love is never easy. That certainly fits with these two. They might be exactly what the other needs but with their strong personalities getting in the way you fear they will never discover it.