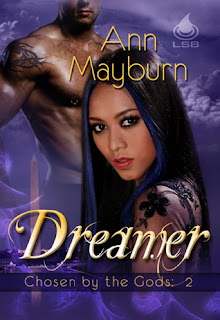 
Arrogant, powerful, and dangerous, Devon King is one of the world's greatest warriors. Yet even he is helpless against the evil that is stalking the children of Washington DC. When the Gods assign him to protect Shan Harrison he can't believe that the beautiful and spirited Goth girl is the key to defeating the nightmares that haunt the city. Shan has the potential to become one of the strongest dreamers in history, if she can survive long enough to come into her full powers. Devon is used to getting what he wants and he wants Shan. Her submissive nature hidden beneath her tough exterior calls to the dominant side of his nature like a sirens song.
Ashamed of her cravings, Shan fights her attraction to Devon and tries to convince herself that what they have is only physical. The servants of evil use her insecurity and self-doubt to try to tear Shan and Devon apart. If Shan doesn't learn to accept her desires, and Devon's love, darkness will triumph and everyone that she holds dear will be destroyed by terrifying nightmares come to life.

What would it be like to find out you have the power to go into other peoples dreams, to save them from nightmares. Would you do it, or cower in fear? Dreamer is full of sexy, beautiful, men and women with powers blessed to them by the gods. Shan believes herself to be apart from that group, just an average girl. Until things begin to happen around her and her whole life is changed.


Shan intends to shake up her life, well mostly her love life. Her best friend Daisy is going to open her eyes to something she has been craving, even if Shan doesn’t know exactly what that something is. Or at least she doesn’t seem to know until her eyes land on the sexy Dom who’s soul seems to be calling to her. And just like that the bomb falls and Shan learns: she has hidden powers, a calling to serve a god, the identities of her parents, and that she needs this specific Dom like a fish needs water.

Shan’s Dom turns out to be Devon, built like a dream and every inch a warrior. He will melt you into a puddle with his skills. But more than his bedroom prowess he realizes that Shan is a perfect match for him, she is his other half he has been searching for and he will do anything to protect her. Now who wouldn’t want that all wrapped up in a drool worthy package?
Mayburn has created a turbulent world where various gods use their chosen to fight and protect, or depending on what side you are on, to attack. You will not want to put Dreamer down it is so full of action. Devon brings just the right amount of BDSM and tenderness. And as Shan goes through her changes you will be right there with her for the ride. If you haven’t checked out this author yet you are missing out.

Rating: 4 Wines, just make sure they are a strong Red to go with this hot book!