Hello lovelies! I hope everyone enjoyed their weekend! We have two special guests joining us from author Magan Vernon's new adult romance novel, THE ONLY EXCEPTION. Enjoy!

A debate between Monica and Trey...


I laid on Trey’s couch, my feet propped up on his lap while we watched the evening news. I would have rather watched something, anything else but it was what he wanted to watch and I had to give in...sometimes.
“Seriously?Another politician in a sexting scandal?”
Trey looked down at me, propping his arm up on the back leather couch behind him. “You’re acting like you expected it.”
“How hard is it to keep it in your pants? Especially as a politician?”
“Everyone makes mistakes. Even politicians.”
I sat up straight, raising an eyebrow. “So it’s just a mistake that he would cheat on his hot wife by sending pictures of his manhood out to random women on Twitter?”
“Hey, no need to get worked up.” Trey put his hand on my knee, but I shoved it away.
“Seriously, Trey, the dude has a gorgeous wife and he’s out there sending pictures to random women. If that isn’t senseless and inappropriate then I don’t know what it is.”
He nodded slowly before he turned to the side and placed his hands on either side of my hips, leaning closer until he was hovering over me, his lips just inches from mine. “You’re right, Monica, as always. If I was with anyone other than you, though, I don’t know how I’d be able to resist finding you.” He ran his fingers down the length of my jaw line before placing a very tiny kiss on my neck. I had to swallow hard and ignore the shivering sensation that overcame me.
“You can’t win this debate by kissing me. What if I was the one you were cheating on? Would you send random sext messages to women?”
He breathed onto my neck, before running his lips along the line where my collar met my skin. “I would never, ever want to be with anyone else but you. If I were a politician I would be the one getting called out for sending you those type of messages. No one else.”
I swallowed hard, trying not to give into the sexy temptation and let him win the debate. “But why even send them? Why when someone would know they could get caught?”
His lips briefly traced the line of my collar bone before his bright green eyes met mine. “Sometimes you have some much passion for someone that you can’t think straight. They are the only thing on your mind. It’s like a drug. You try and stay away but you can’t get enough of them.” He leaned closer, pressing his forehead to mine. “That’s what you’re like to me, Monica. I tried to resist you. I try not to let every desire I have for you overpower me, but sometimes you’re all I can think about and you drive me absolutely crazy.”
“Enough that you would throw caution out the window like that?” I raised my eyebrows, tracing a line down his arm, feeling the curves of his bicep underneath his dress shirt.
“I never thought I’d do anything crazy until I met you. I always thought I could stay focused. Stay in my element.” His gently kissed my lips before he slid down, lifting up the hem of my shirt and lightly kissing my princess flower tattoos that poked out of the top of my pants. The sensation of his warm lips on my skin left goose bumps everywhere his lips touched and an involuntary gasp escaped my lips.
“Everything about you drive me crazy and I love it. I love every part of you. And if I happen to get caught up in the moment and send you a message or something that could backfire, then I guess I’ll have to come up with a better excuse than my girlfriend is too sexy to handle.”
I swallowed, looking down at his smiling face that was hovering right above the zipper to my pants. “You may have won this round, Mr. Chapman, but I’ll get the next.”
He popped the button at the top of my jeans and slowly pulled the zipper down with his lips before smiling at me. “We’ll see about that.” 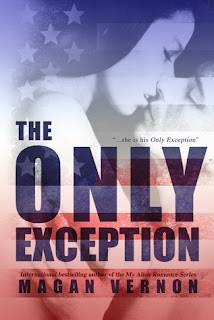 Monica Remy doesn’t make exceptions.
The fiery nineteen-year-old transferred to Central College to escape her problems, blend into the crowd and forget the past. But escape becomes almost impossible when she attracts the attention of her new and undeniably sexy neighbor: Trey Chapman, the governor’s son.
Despite his vivid green eyes, adorable freckles, and athletic body, Trey is everything that Monica despises - haughty, conservative, bossy. And able to get under her skin in a way no other man ever could.
A class project forces the unlikely pair together, their chemistry building with each heated debate. But when the ghosts of Monica’s past come back to haunt her, both their beliefs will be tested, and both will be forced to see the world in a new light.
Their differences threaten to tear them apart, unless they can make one another their only exception.

Magan Vernon is a Young Adult and New Adult writer who lives with her family in the insurance capital of the world. When not writing she spends her time fighting over fake boyfriends via social media. You can find her online at www.maganvernon.com.
Facebook Fan Page:  https://www.facebook.com/pages/Author-Magan-Vernon/215620155165079
Twitter:  https://twitter.com/MaganVernon
Goodreads:  http://www.goodreads.com/author/show/5237606.Magan_Vernon