Review: Scent of a Mate by Milly Taiden - 5 Wine Glasses! 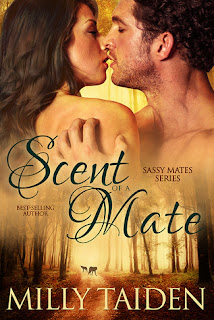 Mission: Scent a Mate
Jordan Alvarez knew that a promise to her best friend involved staking out the local wolf pack's scenting ceremony and recording the graphic details, but she was the writer and the only one with the balls to finish the task. No one would know that four human women had sneaked proof of their rituals, or at least, that was the plan until Aric Wolfe showed up.
Mission: Stake a Claim
Aric Wolfe knew his baby sister was up to something, and expected her best friend, Jordan, to be in on the chaos. He finally had an opportunity to lay claim to a mate that had been under his nose for years. Jordan's scent called to both the man and the animal, and he was done fighting the call of the beast. It was time to mark his mate.
Mission: Survive an Alpha
When a good intention creates a problem for the Wolfe family, Jordan finds herself being stalked by a woman intent on claiming Aric as her own. Battle lines will be drawn, love will be put to the test, and Aric will have to fight Jordan's strong personality to keep her alive. Two alpha hearts seeking control will either find the balance or risk losing their love forever.

Hey everybody! So I fell off the face of the Earth for a while, but I had to come back and tell you about Milly Taiden's Scent of a Mate! First, I want to tell you WHY I enjoy Milly Taiden books. It's because her female characters are anything but fluff. They're not always Terminator kick ass like I'm prone to liking, but they're REAL and they're SASSY. In fact, I would say, Milly does sassy characters incredibly well. Jordan in Scent of a Mate is a fine example of Milly's sassy girls. She's a curvy woman who's good with who she is. Jordan is also intelligent and a survivor. All great characteristics of a character who has to get through the hurdles the author likes to throw at her.

Jordan's first hurdle? Her childhood crush, and best friend's brother, Aric. For the record, I would like everyone to know that Aric is mine and I don't share. SORRY! Ya'll can just drool in envy as I keep this hot, alpha wolf ALL TO MYSELF. Try not to be jealous ya'll - green doesn't look good on you. *winks*

So, Aric has always known that Jordan was his mate. Only he met her when she was way to young for that kind of commitment. So he does the honorable thing and waits in the wings for Jordan to grow up. He's tired of waiting now though, so he's going after his woman. And it all starts with some good old fashioned crotch sniffing. That's right. You read that correctly. Crotch sniffing. And I giggled myself silly when Jordan was faced with Aric in his wolf form as he taking a big ol' sniff of her.

I don't won't to spoil the book for you, so what I will say is this. There are attempts on Jordan's life and Aric and his family are trying to figure out why. While the investigation is going on we get a great look into Jordan's insecurities with her relationship with Aric. We also get the beginnings of a back story between one of Aric's best friends from a different pack and his sister who is Jordan's best friend. All in all, Scent of a Mate has some nice plot twists and turns with a good dose of humor that will keep you chuckling while you're turning the pages. It's also chock full of SMEXY, so keep your cold glass of water nearby to cool yourself down with. I recommend the dumping it over your head technique. It's like a cold shower, without the actual shower - and ice cubes too!

Keep reading for an excerpt and to enter Milly's Giveaway!

Excerpt from Scent of a Mate © Milly Taiden:

“Not a word.” The deathly growl made the hairs on her arms stand on end.

She glanced over her shoulder at the smiling bartender. The crowd parted as he dragged her to the other side of the club. She bumped into a couple making out. Aric’s hand tightened on her wrist. Her earpiece fell. Going back to get it was not even a possibility in the sea of bodies.

People moved out of Aric’s way. She wondered how he did that. Hell, she’d had to struggle to get to the bar. After a few steps, she heard some snarling and then he turned to look at her. No wonder everyone was making a path for them. He appeared ready to bite someone’s head off. It was debatable if it was hers or someone else’s.
“Aric!” She tugged on her hand, trying to get loose.

He pushed a door open, shoving them outside in the process. This wasn’t the way she’d come in. The door he’d taken them though led into a dark alley. He let go of her hand and turned to face her, his features tight with anger. She took quick steps back, until her back was pressed on a metal gate.