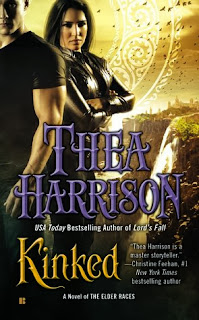 Two opponents must confront the cause of their obsessive fury in the latest Novel of the Elder Races…
As a harpy, Sentinel Aryal is accustomed to dealing with hate, but Sentinel Quentin Caeravorn manages to inspire in her a burning ire unlike anything she’s ever known. Aryal believes the new Sentinel to be a criminal, and vows to take him out as soon as the opportunity arises. But the harpy’s incessant wrath has pushed Quentin to the limit, and forces him to make a deadly vow of his own.
To put an end to the conflict, Dragos, Lord of the Wyr, sends them on a reconnaissance mission to the Elven land of Numenlaur. Forced to work together, Aryal and Quentin’s mutual antagonism escalates. Each fight draws forth more passion—culminating in an explosively sexual confrontation. But when their quest reveals real danger, Aryal and Quentin must resolve their differences in ways beyond the physical, before the entire Wyr is threatened.


I feel like I've been waiting for this book forever. Since the very first book in this series, Dragon Bound, I've wanted Aryal's book. What can I say? I love harpies. Both in the metaphorical and literal ways.

Aryal has been investigating Quentin ever since he popped up on her radar. There's just something about the man that sends all of her instincts into the danger zone. She can't put her finger on it, but she just knows that he has been, or will be, a threat to those she holds dear. But no matter how far she digs into his past, he comes out squeaky clean. Which only convinces her that he is guilty of something, because no one is that squeaky clean.

Quentin is sick and tired of the harpy investigating him. Not because he's innocent. No, because he's afraid that Aryal will eventually discover something he's done in his past that he's not very proud of.

Their animosity towards each other finally erupts, and Dragos sends them away on a mission to work out the problems between them. Dragos is hoping that if they're forced to work together, then they'll move beyond their ridiculous grudge. After they embark on their mission, both Quentin and Aryal see sides of each other they never knew existed. Their defenses against each other start too drop and chemistry starts to simmer.

They're not given long to appreciate that igniting chemistry though Danger awaits them. And even if they make it through the threat, will Aryal forgive Quentin his past transgression once it comes to light?

I love, LoVe, LOVE this series! And this freakin' book! And Thea Harrison! Aryal's book was everything I hoped it would be and more. Definitely worth the wait. Her chemistry and bond with Quentin was tangible. The story unfolded beautifully. And as usual, the humor was fantastic. I'll be waiting on pins and needles for the next book.