Getting Rowdy by Lori Foster (Q&A/GIVEAWAY)

Today we are featuring Lori Foster's Getting Rowdy! Find out more about the book below + a giveaway! We apologize for not being able to feature our original interview with Lori Foster but due to a communications error we have a standard Q&A instead. We do hope you enjoy it!


1. It is great you are so involved with all different kinds of charity events! Where did you find the time to write your latest release?

I’m a fairly motivated, some might even say spastic, person. I tend to stay busy… all the time.  And honestly, I LOVE to write. It’s a job, for sure. And not always easy. But more often than not it’s my entertainment, my solace, sometimes cathartic, sometimes outright necessary. If I go too long without writing, I start to get antsy. Like a junkie, I need my fix. And so I write. Often. It helps in meeting deadlines, and because I incorporate books into my charity work (note: the benefit books where all proceeds go to a really wonderful and local charity) things just fall into place.


2. Just how rough, rugged and imperfect—or perfect, some might argue— do you like the men to be in your fictional reads? Or do you go for the more sophisticated kind when you’re not the one writing them?

Strictly as a reader, I like Alphas. They can be lumberjacks or millionaires, doesn’t matter to me. They also have to be honorable and caring. So many confuse Alphas with jerks, and that’s just not the case. Alphas are the guys who take over when others waffle in indecision. They confident enough that they don’t feel threatened by the strength of others, so a strong woman is fine, a tiny baby is fine, a villain is fine – whatever, they’ll deal with it. I love humor, so if the hero is funny to boot, that helps. But I’ve also read serious heroes that I loved.


3. What do you think readers will like/love about Rowdy and Avery?

I think readers will expect Avery to give in to him more quickly. I mean, he’s ROWDY, and he’s so yummy. But I also think they’ll respect her for wanting more than what he initially offers. Again, why wouldn’t she? He’s ROWDY. Lol.
The opening scene was a shocker for some. I’ve had a few readers write me that they wanted to club Rowdy for that scene. But then later, they realized why he did the things he did, and then they started liking him again.


4. Rowdy has been a favorite character of mine since the first book, Run the Risk. Tell us a little about Rowdy and how he got his name.

Rowdy comes from a very poor home life. His parents were drunks who later died in a car accident. When his mother birthed him, she’d been drinking heavily and couldn’t think of a name, and didn’t really care enough to put a lot of thought into it. Since their last name was Yates, and she’d always thought Clint Eastwood was hot, she named him after a Clint character.
Rowdy might have been more of a victim, given what he endured, but when his parents had Pepper, the protector in him took over and his entire focus, even as a kid, went into defending his sister and ensuring she didn’t suffer the same hardships as him. He and his sister are very close, and that as much as anything else helped to save Rowdy. 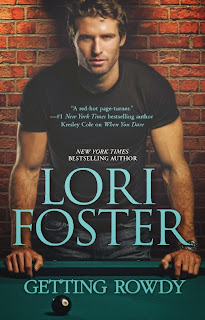 Charismatic bar owner Rowdy Yates isn’t the kind of man women say no to. So when he approaches waitress Avery Mullins, he fully expects to get her number. However, the elusive beauty has her reasons for keeping her distance— including a past that might come back to haunt them both.Avery spends her nights working for tips…and trying to forget the secret Rowdy is determined to unearth. But when history threatens to repeat itself, Avery grows to rely on Rowdy’s protective presence. As the sparks between them ignite, she will be forced to choose between the security she’s finally found…and the passion she’s always wanted.

Since first publishing in January 1996, Lori Foster has become a Waldenbooks, Borders, USA TODAY, Publishers Weekly and New York Times bestselling author. She also received the Romantic Times “Career Achievement Award” for Series Romantic Fantasy and Contemporary Romance.
Lori believes it is important to give back to the community as much as possible, so she routinely arranges events among authors and readers to gather donations for various organizations.

GIVEAWAY:
Booktrib is giving away one copy of Getting Rowdy to one winner, US and Canada only please. To enter, just fill out the rafflecopter below. Good luck!