The Ghost of Josiah Grimshaw by Suzy Turner (Guest Post/Giveaway)

Happy Thanksgiving to all my US friends today! I hope your day is full of lots of love, plenty of things to be thankful for, and of course... turkey! ;) Today I would like to welcome author Suzy Turner who has brought along a special guest with her...

Interview with London heart throb, Declan Alexander from the Ghost of Josiah Grimshaw

I'm delighted to have Declan Alexander here today. He's just popping in for a drink on his way to Andilyse Island to collect his friend's daughters, the Morgan Sisters, who will be spending the next two weeks with him and his girlfriend on his house boat.

Hey Declan! Here's a banana smoothie. How are you?
Ooh lovely, thanks (he holds it up in thanks before taking a long gulp, leaving a frothy moustache temporarily behind). I'm good thanks. Got a long day ahead of me though. I'm off to Andilyse Island... it's gonna take four hours there and four hours back. But it'll be worth it.


Why are the Morgan Sisters staying with you?
I promised their Dad, Patrick, that I would take care of them while they do work experience in the city. Patrick is a good man, I'd do anything for him.

That's nice. But why is that?
We used to work in the force together. I took a bullet for him, on a couple of occasions and he's been like a brother ever since.

There's something you're not telling me isn't there?
Can you keep a secret?

Of course!
The girls aren't really going for work experience. They're going to be initiated into the Praxos Foundation.

The Praxos Foundation?
Yeah. It's where I've been working for years. You see, (his voice quietens into a whisper), we fight crime... human and paranormal crime.

Oh I see. But why are Patrick's daughters going there?
Because they're special. They're like me... they're not entirely human.

But what are Watchers?
They're half human, half angels. Patrick adopted them when they were babies. He and his wife were actually chosen to look after them, but, of course him and Audrey don't know that. They don't know the truth. They can't know.

Why not, Declan?
Because it would put them in too much danger.

Declan glances at his watch and does a double take. 'Crikey, I'm going to miss the ferry. Thanks for the smoothie, my lovely,' he shouts as he disappears out the door and before I know it, he's gone. 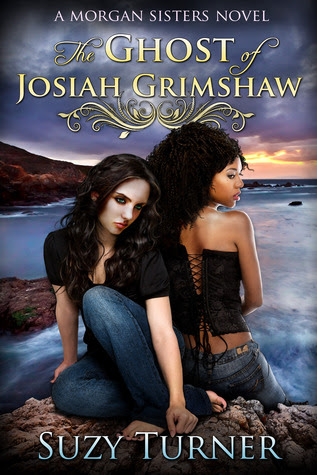 The Ghost of Josiah Grimshaw

Adopted sisters Lana Beth and Emma Jane are polar opposites, but when the same strange 'tattoo' suddenly appears and winds its way up their bodies within days of each other, they soon realise there's more to their relationship than they could ever have imagined.Sent off to London for two weeks of 'work experience', the Morgan Sisters soon find themselves being initiated into the ancient Praxos Foundation, one that protects the innocent while fighting evil, both human and supernatural.At the same time, Lana Beth and Emma Jane must also investigate why the sweet but sometimes pesky ghost of Josiah Grimshaw just won't leave them alone.