If you are a reader who enjoys a love story where opposites attract, then The Officer Says I Do is perfect for you! Help me welcome Jeanette Murray today as we ask her about her opposites attract release. 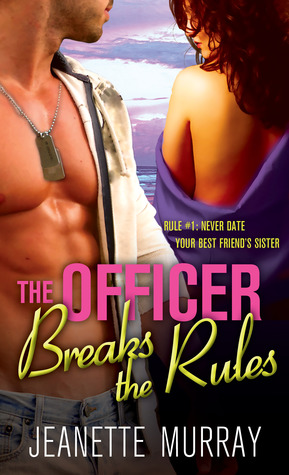 Lexi: A Marine and a free spirit, about as opposite as you can think of. Did you relish the challenge of making these two work, or did they just click?
Jeanette: When you write romance, you know there’s a Happy Ever After (HEA) involved. So you create these two characters, and in the end, they’re going to end up together. The typical theme is, you need conflict to keep the story going. Why should they NOT be together? What’s going to keep them apart?
Lexi: I adore an opposites-attract story, because the sparks are automatically there. The conflict is built in. But the real challenge is finding out how to make those sparks turn into something fantastic rather than just singing each other. Rather than “What will keep these two apart?” it was “Why do they want it to work so badly?”
Jeanette: The brilliance of these two was that they both wanted to make it work. The struggle was, they wanted it so much, they were losing something to gain something. I wanted them to have it all. So I had to figure out how to make that work.
Lexi: Hard to top a sexy Marine, and Tim sure fits that bill...he even proposes to Skye in Vegas! Did you find yourself falling in love with his character as you wrote The Officer Says I Do?

Jeanette: Tim is just adorable. He’s basically a mash-up of a lot of guys I know via Hubs and his fellow Marines. They’re fantastic, loyal, hard-working, loyal, adorable in the uniform, did I mention loyal? It’s difficult not to adore each one of them. I’ve never known so many great guys (and gals!) before. So with Tim, I felt like I knew him before I wrote Chapter One, and was already a fan of his. He’s not any one guy in particular, but most of his traits I can see in a number of Marines we’ve met along the way.
Lexi: Skye if a firm believer in fate. Do you believe in fate as well? Any turning point in your own life you can chalk up to fate?
Jeanette: I do, to an extent. I believe in making your own fate, but also paying attention to what pops up unexpectedly. Sometimes it’s simply there, designed to make you think twice before continuing on the same path. Sometimes, you need to veer a little off course. I think Hubs and I, growing up 10 minutes apart since we were like 3, but not having met until AFTER he moved five states away for college, was fate. We would have disliked each other had we met earlier in life. We needed time to grow up and grow into who we needed to be as adults before meeting in order to click. So the stars aligned for that one, definitely.
Lexi:How about Vegas, have you ever been there yourself? Ever had any crazy spur of the moment decisions (jumping up on a stage, making out with a stranger type stuff)?
Jeanette: Can you believe it, I’ve never been to Vegas? It’s a trip I’m dying to make, but with what time, right? Maybe in a year or so. But for spur-of-the-moment stuff…I’m the queen, baby. I’m The Crazy One from my friends growing up. Moon the basketball team as we (the tennis team) drive by? Check. Lay down for a nap in the middle of US History lesson? Check. Randomly jump off a cliff into a rock quarry half-full of water simply because of a dare? Check…and broken tail bone. Yeah, my impulsive nature doesn’t always lead me in the right direction…but I’m usually having fun. (That is, until the X-rays…)
(ouch on the X-rays! But it sure makes a great story!)

Lexi: Fate seems to be telling you to keep writing. Book one in your Semper Fi series has been well received and has readers waiting for the book two! Do you have a number in mind for the series, or just keep on going as long as you can?
Jeanette: Funny you should ask… The series was actually designed to be a trilogy, with Tim, Jeremy (January 2013) and Dwayne (summer 2013) as my three heroes. But as I was speaking with my editor the other day, she asked if perhaps there was another Marine or two lurking, waiting to be introduced. I’d been wondering myself, so I guess we’ll see if we extend out past three. I love my Marines, they’re fantastic guys. I think men in uniform are such natural heroes simply for their willingness to already sacrifice for the greater good. (Like other first responders, who also fall into that category.) I’d love to write more. Or maybe start with a completely new branch of the military. Either way, I always keep my readers updated on the latest developments via Facebook or on my blog at my website. We’ll have to see if it works out!

Lexi: Exciting! Good luck discovering a few more Marines! Thanks Jeanette for stopping by today. And thanks for the great HEA in The Officer Says I Do!
Jeanette: You’re welcome, and thank you for inviting me! 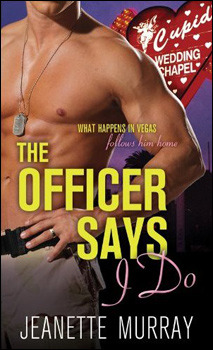 The Officer Says "I Do"
Sempter Fi #1

He's a Marine...she grew up on a commune.
He always puts duty first...she's a free spirit with an unshakable belief in Fate.
He loves routine and order...she brings chaos and creativity wherever she goes.
They're going to balance each other perfectly--or drive each other completely, utterly insane...
On a wild pre-deployment celebration in Las Vegas, Captain Timothy O'Shay encounters free-spirited beauty Skye McDermott, and for once lets down his guard. Now his life is about to take off in directions he never could have imagined...