Welcome back to Steampunk Saturdays! Today I would like to welcome the super sweet and talented Christine Bell who you also might know as author Chloe Cole!
Thanks so much, Crystal, for having me! So let’s talk a little about steampunk. When people think of this hot new sub-genre, we often think of dirigibles and corsets, of goggles and bowler hats, of alternate worlds featuring fantastical machines, possibly made from gears, and powered by steam. Granted, those are all definitely part of the steampunk aesthetic. There’s also this intangible quality to it, an almost “you know it when you see it” type of feel. I like to say that if steampunk was a movie it would star Johnny Depp and Helena Bonham Carter, be directed by Tim Burton, and the score would be done by Danny Elfman.
Yet another aspect of steampunk is often a dystopian society (i.e. what happened after mechanical monsters took over the world). That can go hand in hand with the last, less talked about facet of steampunk, which is the “punk” part. In order to fall under the umbrella of a punk movement, there is typically a sort of anti-establishment thread woven into the fabric of the discourse. To my mind, steampunk is no different. While the punk part doesn’t have the theatricality that the other elements have, it’s the one I feel really sets the sub-genre apart from science fiction or fantasy. Not to say that sci-fi and fantasy can’t have anti-establishment underpinnings, just that it’s not integral to the genres, whereas with steampunk, in my opinion, it is to some degree.
This probably seems funny coming from me, especially if you’ve read or heard about my Stormy Gale series. To steal a phrase from fab author Cindy Spencer Pape, it’s “steampunk light.” I love steampunk that mixes in other genres, maybe some paranormal, definitely romance, or maybe even a hint of a twisted fairytale. So when I wrote these books, I picked the parts I loved most about traditional steampunk and skipped others. I skipped the fantastical world-building. Stormy is set in a world that is pretty much just like the regular world was at the time periods my characters visit and they are the only ones who know about time travel and the various mechanical inventions that facilitate their journeys. I also didn’t make mine a dystopian society and while, at points, it’s certainly emotional, the overall tone is not dark. In mine, the romance and adventure take stage, the time travel element is stronger than the steam-element, the characters have a lot of banter and my heroine is full of piss, vinegar and snark. And I like it like that. That’s the story I wanted to write.
BUT, even with all that, there is a message buried in there. Stormy wears pants when everyone else wears dresses, she’d rather be brave than pretty, she rails against the injustices of society based on class and works to right the wrongs heaped on the impoverished. There is a commentary on the way society views people who are different, and the way the aristocracy views the poor. It’s not exactly a rage against the machine or anything, but the books stand for something and my characters buck the status quo in many ways.
Because I like my steampunk with at least a dash of punk.
Please tell me, readers, how do you like your steampunk? Do you feel like there are some facets of sub-genre that are non-negotiable? Or is steampunk brand new to you? Two winners will be chosen from comments and will win digital copies of The Twisted Tale of Stormy Gale and The Bewitching Tale of Stormy Gale!
You can find Christine Bell here:
http://www.christine-bell.com
and on Twitter here:
https://twitter.com/#!/_ChristineBell 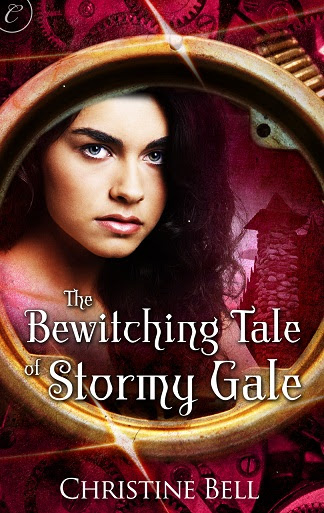 London, 1841 There I was, retired from time pirating, enjoying a full if somewhat conventional life as a wife and mother. Then a chance encounter with a stranger drew me back into a world I'd thought I'd left, quite literally, in the past. From his odd behavior and even odder answers to my questions, I knew Phineas Grubb was up to something. I should have trusted my instincts-before he pulled out a time-travel mechanism and dragged my brother, Bacon, back with him...
Salem, 1698 The infamous Witch Trials may have ended a few years earlier, but the people of Salem are still pretty touchy about outsiders that appear in town as if by magic. Thanks to Grubb, my brother's been accused of witchcraft and thrown in jail. Now it's up to me and my husband, Dev, to save Bacon's bacon before the hysteria starts up again, and the course of history is altered forever...
Sequel to The Twisted Tale of Stormy Gale.

~*GIVEAWAY*~
As Christine mentioned above she is giving away a digital copy of The Twisted Tale of Stormy Gale and The Bewitching Tale of Stormy Gale to one reader! To enter, just leave a comment on this post answering her question and then fill out the rafflecopter below. Additional entries are available but not required. Good luck!
a Rafflecopter giveaway