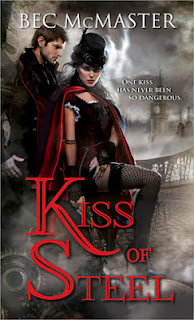 
He craves her like no other...
Honoria Todd has no choice. Only in the dreaded Whitechapel district can she escape the long reach of the Duke of Vickers. But seeking refuge there will put her straight into the hands of Blade, legendary master of the rookeries. No one would dare cross him, but what price would he demand to keep her safe?
Ever since Vickers infected him with the craving, Blade has been quicker, stronger, almost immortal—and terrified of losing control of the monster within. Honoria could be his perfect revenge against the duke…or the salvation he never dared to dream of.


McMaster’s debut is packed full of gristly, dark characters ready to bleed and defend their turf. Kiss of Steel is a perfect example of what Steampunk blended with Paranormal should be.
In a London where a virus is capable of turning people into vampires, one woman may have the key to a cure. Honoria is a woman much like her name, she puts herself on the line for her family and those she loves. With steel in her backbone she faces down the king of the rookeries, and in the end has him melt in her hand.
Blade is one of the toughest, biggest, bad-asses out there. He struts around with a swagger that says he knows it too. He knows everything that goes on in his territory, so when a bounty comes across on a woman that he knows right where to find he claims her to use her as a pawn.

McMaster keeps the story flowing with action and sexual tension. The secondary characters will imprint themselves on you just as much as Honoria and Blade. From the orphans, the werewolves, the desperate and the half man/half machine, the Whitechapel is home to them all. The second installment of the London Steampunk series can’t come fast enough.