Review: The Hour of Dust and Ashes by Kelly Gay 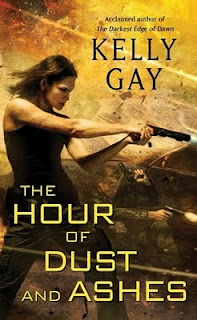 
To save her sister, she must stop a silent killer. . . .Protecting Atlanta from the off-world criminals of Underground is tough enough, but now Detective Charlie Madigan and her siren partner, Hank, learn that the addicts of the offworld drug ash have begun taking their own lives. Ash makes humans the perfect vessels for possession, and something or someone is leading them to their deaths. Charlie is desperate to save her addicted sister, Bryn, from a similar fate. As New Year’s Eve approaches and time runs out, Charlie makes a deadly bargain with an ancient race of beings and embarks on a dangerous journey into hellish Charbydon with Hank and the Revenant Rex to save Bryn and make it back before it’s too late. Only, for one of them, coming home means facing a fate worse then death. . .

Well not exactly, but it would be much more of a mouthful to say Charlie Madigan series addict.


The Charlie Madigan series started out strong with book one, delivered a solid hit with book two. Now The Hour of Dust and Ashes manages packs in more action and deep emotion than the previous books. Can Urban Fantasy get any better than this?

Picking up right where book two left off, with Charlie right in the middle of potential inter species war and enemies on every side. With out such a strong group of friends, or paid oracles, Charlie would possibly be dust. Instead she meets the sylphs who give her four gifts. Who would willingly take a gift that basically kills you first, Charlie, knowing it will be her ticket to saving her sister.  Bring on the unknown powers, see who is left standing in the end.
Urban Fantasy usually has some bit of romance in it, this series has always had a little hint but not much more than a flirty smile or heated gaze. Finally we get to see Hank and Charlie reacting stronger to each other, raw emotions coming out. Hank’s character and background is revealed, and you will not be able to help but fall for this siren.


If you haven’t picked up this series yet you are missing out. Kelly Gay knows her urban fantasy, do you?

Rating: 4.5 Wines, this series keeps getting better and better!