Irreverent. Irresponsible. Insatiable. Who says immortals can't have any fun?
The year is 3048, Earth is no longer habitable, and man has fled to the stars where they’ve discovered the secret of immortality—Meridian. Unfortunately, the radioactive mineral is exorbitantly expensive and only available to a select few. A new class comprised of the super rich and immortal soon evolves. The Collective, as they’re called, rule the universe.
Two-thousand-year-old Ricardo Sanchez, vampire and rogue pilot of the space cruiser, El Cazador, can’t resist two things: gorgeous women and impossible jobs. When beautiful Skylar Rossaria approaches him to break a prisoner out of the Collective’s maximum security prison on Trakis One, Rico jumps at the chance. Being hunted by the Collective has never been so dangerous–or so fun! 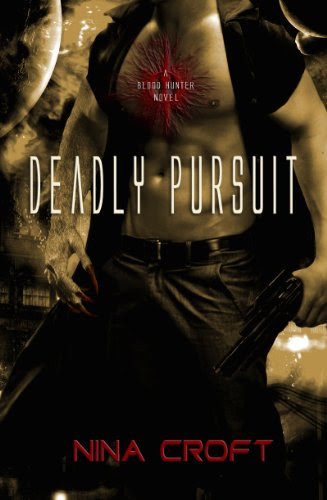 Breaking assassin Jonathon Decker out of a maximum security prison on Trakis One seemed like a good idea at the time. Now, pursued across space by the two most powerful factions in the universe, the crew of El Cazador are having second thoughts. They'd like to give him back. Unfortunately, that no longer seems an option.Jon is used to working alone. Now, he's stuck on the space cruiser El Cazador until he can work out just what he's supposed to know that puts him on everybody's most-wanted-dead list. He s not happy that the crew includes a runaway priestess with designs on his virtue such as it is. Jon likes women, but he gave up the role of protector a long time ago, and Alexia, High Priestess of the Church of Everlasting Life, is an accident waiting to happen.After twenty-four excruciatingly boring years of doing her duty, Alex is finally having some fun. She never meant to run away it was a rash impulse and she means to go back eventually. But first, she's going to squeeze enough excitement out of the situation to last her a lifetime. And what could be more exciting than a stunningly gorgeous werewolf?Meanwhile, the Church are chasing their missing priestess, and the Collective are pursuing their escaped assassin. Being hunted has never been more deadly...or more fun.

GoodReads
Purchase at B&N
My Thoughts:
Race through space on a heart-pounding, out-of-this-world adventure with a dark and sexy vampire, a brooding werewolf and the courageous women that stand by them throughout it all in the Blood Hunter series!
In the first book, Break Out, Skylar Rossaria is on her first solo mission for the Corps. The Corps is a specialized military unit that is part of the Collective, a group of immortals that rule the universe. She enlists the El Cazador and her crew to break a prisoner out of a maximum security prison, an impossible task but one she is determined to complete. What Skylar didn’t plan on however was the sizzling attraction she feels for the El Cazador’s sexy owner and pilot. A two thousand year old vampire with magnetic sex appeal, Ricardo Sanchez, accepts the job, looking forward to a large payment and an even better bonus. He knows Skylar is hiding secrets and keeping him at a distance because of that, but refuses to let her get too far. Will danger catch up with them before Rico has a chance to collect though?
Break Out was a fiery novella that I didn’t want to end! Full of sexual tension, mystery, humor and flaming hot sex scenes it kept me turning the pages until the very last. The story flowed perfectly for its length and the characters were superbly written. I loved Skylar and Rico, and the dynamics of their relationship. The secondary characters are just as loveable and I couldn’t wait to see more them in the second installment!
The Blood Hunter series continues with Deadly Pursuit and the prisoner that the crew of the El Cazador freed from Trakis One’s maximum security prison, Jonathon Decker, a lone werewolf assassin with a bad attitude. With the Collective hot on their tails, returning Jon is no longer an option, so the group must find out what the Collective thinks Jon knows and hope that they can trade that information for their lives. When the Church adds to the El Cazador’s list of pursuers though, cabin boy Al must step forward and reveal her true identity as the missing high priestess.  Suppressed by the Church and her duties for the last twenty four years, Alex yearns for adventure and finds it, and the family she has missed out on, aboard the El Cazador. With her days of freedom and excitement drawing to a close, Alex is determined to experience everything she can in the short time, including seducing the magnificent werewolf who seemingly wants nothing to do with her. But despite the fact that Jon gave up on being close to anyone ever again he can’t help the protective instinct that the small red head brings out in him. Will Alex be able to experience the promise of passion she sees in Jon’s eyes before the Church catches up with them or will their enemies find them first?
Not very often you find a second novel for a series that is just as fantastic as the first but Nina Croft delivers with Deadly Pursuit. Drama and romance is perfectly balance in this intergalactic full novel adventure, and Nina Croft expertly weaves a fun tale that you won’t be able to put down! With an assortment of entertaining characters and a longer story this time around, readers will find fuller character development and more to love here. Jon is a bad-ass hero sure to make you swoon with plenty of inner demons to grab at your heart while Alex is a heroine with a fierce heart and warrior spirit. All the previous characters are back and really shouldn’t be classified as secondary since they each play their own capacious role in the story. Deadly Pursuit does make a good stand-alone but better read in series order, imo.
If you like a mix of sci-fi, urban fantasy and paranormal romance then Nina Croft’s Blood Hunters is the series for you! Action, intrigue, an immersing plot and captivating characters I loved every second of Break Out and Deadly Pursuit. Nina Croft is a new-to-me author but has quickly turned into a must-read author! I look forward to more installments in this fantastical series!

Rating: 4 Wine Glasses for each of Blood Hunter books, loved them!

Sexual Content: Plenty of teasing that will make you sweat leads to a gratifying climax for readers and characters alike. Adult content, super hot!
Posted by Crystal @ RBtWBC at 12/01/2011 06:30:00 AM