Good evening folks, running a bit late today! Sorry about that. We have a tour for author Katie Salidas Immortalis Series but she had a little emergency today and wasn't able to stop by, so we're wishing her the best of luck and giving you the deets on the author and her hit urban fantasy series, The Immortalis with a quick Q&A and a giveaway!
I am Super Woman… Endowed with special powers and abilities, beyond those of mortal women, I can get the munchkin off to gymnastics, cheerleading, Girl Scouts, and swim lessons.  I can put hot food on the table for dinner while assisting with homework, baths, and bedtime… And, I still find time to keep the hubby happy (nudge nudge wink wink). I can do all of this and still have time to write my novels.
Sorry… I can’t even write that with a straight face.
Lies all lies.

Here’s the reality. I’m a sleep-deprived, overworked, mom who just doesn’t know the meaning of the word balance. Writing is my passion and so is my family, so I try to do it all when I can. Needless to say that leaves me feeling pretty exhausted most days.
I’ve been writing since I was little. I always loved to make up stories and characters. It’s just a part of who I am. My first official writing project, was a novel I attempted to write when I was 14. I had just finished reading the Vampire Diaries series and wanted to make my own teenage story. I had most of it written and then was told we were moving from Texas to Nevada. Sadly those pages were all lost in the move. Though that accident hurt, it didn’t stop me from writing. I don’t write YA style stuff any longer, but I do still write about vampires and other such creatures of the night. They’re just so much fun to work with!
I love vampires, werewolves, ghosts, and other things that go bump in the night. I remember as a kid, watching the old Dracula movies and being interested vs. scared. When I was ten, I read my first vampire book and never looked back. There is an escape there, in the supernatural world, it adds a layer to life that makes the mundane not so dull. To imagine other creatures, other beings living amongst us yet still hidden in the shadows was such an interesting concept.
All the time! LoL. I call that writer’s block. It’s also the reason I am a pantser. When I first started to write “officially” I thought I had to plot out every detail of my story ahead of time. Then my characters revolted! The refused to do what I had set out for them to do. That stalled my story and made me so frustrated at writing, I almost gave up. Then, I got some sage advice. Just relax and “free write.” I took a break and let myself write other things without a pre-planned plot. It was then that I learned I was a pantser. I don’t work well with strict rules and outlines. Now that I know that, my writing has become easier and my characters are more cooperative.
That’s not to say I never run into writer’s block. I still do from time to time, and there are many days where I have to scrap whole chapters because I have written myself into a corner. But, even with those stumbling blocks I’m still writing and creating.
Most of my writing is done on my laptop. I love the portability of it. I do, however, have a few notebooks lying around and I have notes on my phone as well.
You mean there is something else besides writing/editing/promoting? LoL.
Actually, all of my non-work time is devoted to family. I work so many hours on the computer doing just that, writing, editing, and promoting that they often feel neglected. Weekends are work-free time (otherwise the family would mutiny). And family dinner, movie night, and game night are a staple in our house.
Katie: Music helps, but not just any music will do. I have to listen to something that can become a sort of white noise. Sounds strange, I know. When I know a song inside and out, I can listen without listening, and just hear the “mood” of it. That’s when I can use it. I often use music to set the mood of my scene.
If the music is too unfamiliar to me, my ADD kicks in and I end up listening to the words and learning the lyrics rather than just enjoying the feel of it.
We writers are weird, huh?
My favourite character surprises people sometimes. It’s Nicholas. He’s a secondary character in the Immortalis series, but he’s slowly taking on a more prominent role as the series progresses. He’s snarky, he’s rude, and he rubs you the wrong way. But, ultimately, he’s a good guy. My favourite scenes are the ones where he and another character are arguing. Nicholas is always right, but he has to be a jerk about it.
My favorite line is actually the tag line to my first book. “Becoming a vampire is easy. Living with the condition, that’s the hard part.”
You might have read books about vampires, but how many of them took you step by step through the emotional turmoil of what that change actually entails? In Immortalis you’ll see a normal, everyday girl lose everything as she becomes a creature of the night. But it’s not all doom and gloom. Sure, there’s a learning curve there, but if she can overcome it, both she and you, the reader, will find that it can be pretty sweet!
The Immortalis series is set in modern times. Books one and two are set in Las Vegas Nevada, which, by the way, is the best city out there for creatures of the night. Book three, Pandora’s box takes you to Boston. There you will learn even more about the world of unnatural creatures and some of their origins in Ancient Greek Mythology.  What I wanted, was to show you how easy it would be for these creatures of the night to actually exist and oftentimes co-exist within normal society.
Book 4 is in the works right now and I hope to have it out by spring 2012. I can’t give too much away, but suffice to say the cliffhanger of book three will be resolved 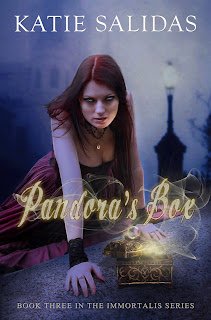 After a few months as a vampire, Alyssa thought she’d learned all she needed to know about the supernatural world. But her confidence is shattered by the delivery of a mysterious package – a Pandora’s Box.
Seemingly innocuous, the box is in reality an ancient prison, generated by a magic more powerful than anyone in her clan has ever known. But what manner of evil could need such force to contain it?
When the box is opened, the sinister creature within is released, and only supernatural blood will satiate its thirst. The clan soon learns how it feels when the hunter becomes the hunted.
Apparently powerless against the ancient evil, the clan flees Las Vegas for Boston, with only a slim hope for salvation. Could Lysander’s old journals hold the key? And what if they don’t?
And how welcome will they be in a city run by a whole different kind of supernatural being?
Werewolves… 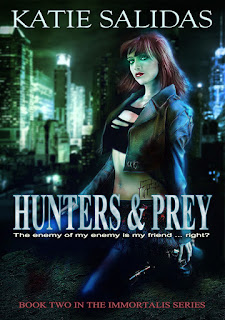 Becoming a vampire saved Alyssa from death, but the price was high: the loss of everything and everyone attached to her mortal life. She’s still learning to cope when a surprise confrontation with Santino Vitale, the Acta Sanctorum’s most fearsome hunter, sends her fleeing back to the world she once knew, and Fallon, the friend she’s missed more than anything.
Alyssa breaks vampire law by revealing her new, true self to her old friend, a fact which causes strong division in the group that should support her most: her clan.
Worse yet, her revelation entangles Fallon in the struggle between vampires and hunters and The Acta Sanctorum is ready to attack again, with a new army of hybrid creations: the Frenzy Soldiers.
If Alyssa hopes to survive and keep her mortal friend safe, she’ll have to be willing to make a deal with the enemy, and regain her clan’s support. It will take everyone working together in a precarious truce to fight against the Acta Sanctorum’s new threat. 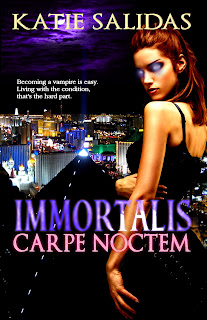 Bleeding to death after brutal mugging on the campus of UNLV, Twenty-five year old Alyssa, is rescued by the cold and aloof, vampire, Lysander. Taking pity on her, he shares the gift-and curse-of immortality. She awakens as a vampire and is soon devastated by harsh realities of her new way of life: the loss of her friends, her independence, and her humanity.
As if having her humanity stripped away was not enough to make life interesting, Alyssa finds out her “turning”, did not go unnoticed by the rest of undead society. Old enemies; an ancient sect of vampire hunters, known as the Acta Sanctorum, as well as a powerful Vampire mistress, each set plans in motion to destroy both Alyssa and Lysander.
Only by accepting her newfound immortality, seizing the night, will Alyssa hope to survive. She and Lysander must fight together against two sets of enemies bent on destroying them both. 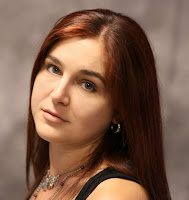 Katie Salidas is a Super Woman! Endowed with special powers and abilities, beyond those of mortal women, She can get the munchkin off to gymnastics, cheerleading, Girl Scouts, and swim lessons. She can put hot food on the table for dinner while assisting with homework, baths, and bedtime… And, She still finds the time to keep the hubby happy (nudge nudge wink wink). She can do all of this and still have time to write.
And if you can believe all of those lies, there is some beautiful swamp land in Florida for sale…
Katie Salidas resides in Las Vegas, Nevada. Mother, wife, and author, she does try to do it all, often causing sleep deprivation and many nights passed out at the computer. Writing books is her passion, and she hopes that her passion will bring you hours of entertainment.
To find out more about Katie visit her website or connect with her on FaceBook, LinkedIn and Twitter!

~*GIVEAWAY*~
Katie is giving away a digital copy of one Immortalis novel, winner's choice, to one reader here on RBtWBC. To enter, just leave a comment on this post and fill out the raffle copter below with your name and email address! Additional entries are available but not required.
Katie is also having a tour wide giveaway for a signed set of all three Immortalis novels plus swag, to enter that giveaway just fill out this FORM.