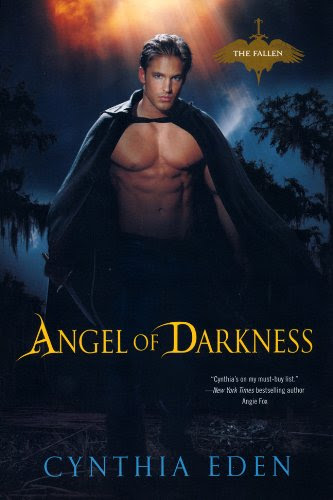 
As an angel of death, Keenan’s job is to collect the souls on his list. He’s carried out his duty for two thousand years and never faltered once. Until he meets Nicole St. James. When the moment of death comes, Keenan hesitates, and instead of taking Nicole, Keenan touches the vampire who’s attacking her.
Cast out of heaven for disobedience, Keenan plummets to earth. Six months later, he finally manages to track Nicole to a bar in Mexico. He’s stunned to discover that the woman he remembers has undergone a dramatic change—she’s become a vampire. And when he realizes that she’s the target of all manner of enemies—other vampires, demons, even shifters—he’ll do whatever it takes to protect her, even if all hell breaks loose…

GoodReads
Purchase at: Amazon, Barnes & Noble and The Book Depository


My Thoughts:
With a distinctive blend of darkness and light, Angel of Darkness is a thrilling new paranormal romance to lose yourself in!


As an Angel of Death, it is Keenan’s responsibility to bring death to those humans’ assigned to him and ferry their soul on with just the touch of his hand.  Unaffected by emotions, Keenan has never wavered in his duty until Nicole St. James. But that one second of hesitation cost him everything, including his wings and Nicole’s mortal life. Cast from Heaven, Keenan tracks down Nicole’s whereabouts, for she is the key, but the woman he finds is vastly different than the one he fell for...
A new vampire on her own, Nicole quickly learns the golden rule of the Otherworld - trust no one. It seems every creature of the Otherworld wants her dead, on the run for her life Nicole winds up in Mexico when a handsome stranger all in black saves her from a group of hunters. Unwilling to trust this champion, Nicole seeks to lose him at every turn, but Keenan quickly catches up. Giving in to his protection, together they seek out why Nicole is being hunted and by whom. But will this Fallen be her savior or her downfall? Nicole will soon learn, there is no escaping Death’s touch…


The first in Cynthia Eden’s newest series, The Fallen, Angel of Darkness was another delightful read from this talented author. Keenan was an amazing character that I loved right away, everything in the human realm is new to him but especially emotions. Watching him learn to control the most volatile ones was intriguing, and never having touched another before…Well let’s just say that the emotions in this story ran high. Full of passion and life, and all for Nicole. *le sigh* Capable, determined and caring, Keenan would go through the fires of Hell again to save Nicole and he will not let anyone take her life, even if that means pitting himself against the most powerful of the Death Angels. Nicole herself was beyond strong, violently thrown into this new dark world she fights for her life with sheer determination – she’s not ready to die yet. She and Keenan were paired perfectly and right away Keenan and Nicole’s chemistry burst from the pages with a sexy sizzle. A heap of sexual tension will keep readers squirming in their seats and when these two get together, well the heat of Hell ain’t got nothing on this pair. Keenan might be inexperienced but he has been watching human’s sexual exploits for centuries and has gathered a lot of knowledge in that field. ;-)


A captivating and smooth read, Cynthia Eden’s flawless writing style will wow you for sure! Each character was given a thorough background without being long winded, giving the world around the characters real dimension. The secondary characters kept me guessing and the suspense and possibilities for the h/h had me glued to the pages. I also liked how Cynthia Eden tied in a few aspects from her Night Watch series, nothing major that would make new readers feel lost, but it was a nice touch for old readers. I cannot wait to read more about these characters introduced here and am looking forward to the next installment, Angel Betrayed (July 2012) which features a secondary character as the main, Sam.


Angel of Darkness makes a fabulous introduction to The Fallen, where good may be bad and bad is oh so good!