The Summer He Came Home by Juliana Stone (Guest Post/Giveaway)

Today I would like to welcome one of my favorite peeps, a talented author and an all-around awesome lady, Ms. Juliana Stone!

I love Rock and Roll…

So put another dime in the jukebox baby…. Seriously, I do!!! I think a lot of my readers know by now, that I used front an all girl rock band back in the days of ice mist hair spray.  I still sing for fun and gig a few times a year, but for the most part, I leave the serious gigging up to my son, the guitarist in the band, Ravyn’sFall!

Two years ago when I decide that I wanted to write a contemporary romance, it was pretty much a no brainer that it would involve music.  I wanted a book where the hero was a singer/guitarist and The Summer He Came Home, pretty much wrote itself!

I based all three books on Bon Jovi songs, and The Summer He Came Home was originally titled, Never Say Goodbye.  I thought I’d share the songs that make me think of my characters with you all!

Cain Black: Times Like These by the Foo Fighters

Maggie O’Rourke: You Found Me by The Fray

Michael O’Rourke: You’ll Be In My Heart, by Phil Collins

Raine Edwards: Back To Good by Matchbox Twenty 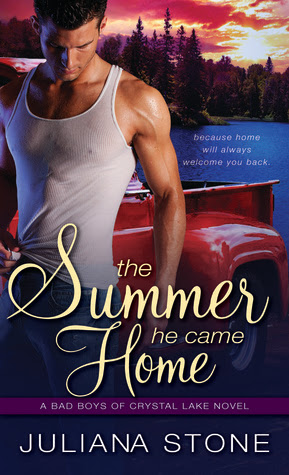 Sometimes the best place to find love is right back where you started…
Falling asleep in a different bed every night has made it easy for Cain Black to forget his past. It’s been ten years since he packed his guitar and left Crystal Lake to chase his dreams. Now tragedy has forced him home again. And though Cain relishes the freedom of the road, one stolen moment with Maggie O’Rourke makes him wonder if he’s missing out on something bigger than fame.
For Maggie—single mother and newly settled in Crystal Lake—love is a luxury she just can’t afford. Sure, she appreciates the tall, dark and handsome looks of prodigal son Cain Black. But how long can she expect the notorious hellion to stay?
The last thing either of them wants is something complicated. But sometimes love has its own plans.

Juliana Stone’s love of the written word and 80s rock, have inspired her in more ways than one. She writes dark paranormal romance as well as Contemporary Romance and spends her days navigating a busy life that includes, a husband, kids, a dog and a cat.

~*GIVEAWAY*~
Sourcebooks is giving away one copy of THE SUMMER HE CAME HOME to one reader today. (US/CA only please.) To enter, just leave a comment on this post: Are there any songs that remind you of certain book characters? Or just give Juliana some love! And then fill out the rafflecopter below. Good luck!