Please give a warm welcome to author Patricia Eimer, joining us with her story, The Clockwork Bride, part of A Riveting Affair anthology!


The Best Things To Drink While Reading Steampunk

When I was offered the chance to post a blog here at Reading Between the Wines about the new anthology that I’m a part of – Riveting Affairs—I started thinking about what I could talk about and then a friend of mine posted the following on Facebook.

In the Beginning, there was a husband and children
Then I found Wine and Books
And I’ve got no idea where the husband and the kids went
And I don’t really care.

I considered it divine guidance and decided to write about the best things to drink while reading steampunk, and as I was thinking about it, I realized that there’s a lot of booze in my books. Not like obsessively falling down drunk amounts of booze but none of my characters are going to quibble about a Guinness at the end of a long day (and they say authors don’t put themselves into their characters).

But for this particular post I thought I’d talk about the drinking habits of my two main characters and how wine (and whiskey) affects their future.

My heroine Aida Mulvaney is the head of Clockwork Engineering at her father’s firm, responsible for most of the newest, and greatest, clockwork automatons that have come from that shop for the past five years. She’s tough, she’s funny, and she’s smart enough not to let the men in the shop walk all over her but she’s not too above herself to refrain from having a beer with the other engineers at the end of the day.

My hero Julian is much more high society. A viscount he’s much more accustomed to champagne and brandy than pints of ale but that doesn’t mean he’s a snob. Julian is smart, a scientist in his own right, and he’s got a burning ambition to be something other than landed gentry and make his own way in the world.

So how does a beer girl and a champagne boy end up together? When during a masquerade ball she puts down a glass of wine and flees across the ballroom to get away from two annoying rogues and ends up falling into his arms.

But while wine may have brought about the introduction whiskey brought about the brilliant idea to get married on an airship floating over London on Christmas Eve during a masked ball where the Vicar is dressed as a werewolf. The rest of happily ever after? They’ll have to figure that out once the hangover wears off.

Either way, no worries for the readers that this is another tea sipping Steampunk. Feel free to pour yourself a glass of wine or a pint of beer or even a very large whiskey—just know that the authors aren’t responsible if you find yourself in front of a Vicar dressed as a werewolf getting married. You were warned about the side effects after all. 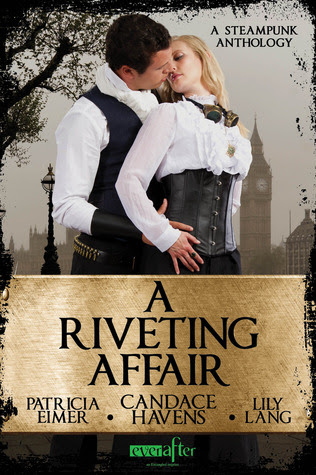 
Beauty and the Clockwork Beast
Rose Verney wants to fulfill her father’s dying request: to complete construction of the teleportation device he designed. Knowing just who can help her succeed, she seeks out Sebastian Cavendish, her father’s brilliant former student.Sebastian hasn’t left his home since he returned from the Civil War. He's a broken man, his prosthetics a reminder of the terrible destruction his inventions brought to the battlefield. He wants nothing to do with Rose and her father's masterpiece, but when she barges into his abandoned lab and begins construction, it’s everything he can do to resist getting involved. Especially when she charms her way into his monstrous heart.
Demon Express
Professor Maisy Clark, professional demon hunter, is on the trail of an evil scientist responsible for the deaths of hundreds. Julian is worse than the monsters he creates, but he's also obsessed with Maisy and willing to kill anyone who gets too close to her. Just when she thinks she has Julian cornered, the sexy marshall Jake Calloway insists the investigation is his, and everything goes to hell. Maisy came to Texas to corner the scientist whose macabre experiments have taken so many lives, and Calloway is just another distraction she doesn’t need. Julian is her responsibility, one she’s not about to share. Even if Calloway can help, Julian will know Maisy is falling for the marshall, and she's not willing to risk his life.
The Clockwork Bride
When engineer Aida Mulvaney attends a masquerade ball at the home of a staunch Luddite earl with a personal vendetta against her father’s company, she doesn’t expect to end the night married to the earl’s son Julian Capshaw, a brilliant engineer in his own right. The marriage will allow both of them to pursue their love of science, without interfering parents and ridiculous social stigmas. Though they escape to the Continent to start new lives, Julian’s father will have none of his heir’s disobedience. Before long, a marriage begun for the sake of convenience becomes a union of passion, but will it survive the machinations of an earl determined to destroy everything they love?


~*GIVEAWAY*~
Entangled Publishing is giving away one digital copy of A Riveting Affair to one reader today. To enter, just leave a question or comment for Patricia Eimer on this post and then fill out the Rafflecopter below. Good luck!