Good evening lovelies! We have a wonderful giveaway for all you Sherrilyn Kenyon fans out there and for those who have had her on their TBR list for as long as I have. ;) To celebrate the newest book in the Chronicles of Nick series, Infamous, we have a feature and a giveaway for book #1 in the series, Infinity. Enjoy! 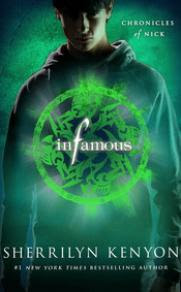 The world has fallen in love with Nick Gautier and the Dark-Hunters. Now Nick's saga continues in the next eagerly anticipated volume...
Go to school. Get good grades. Stay out of trouble. That's the mandate for most kids. But Nick Gautier isn't the average teenager. He's a boy with a destiny not even he fully understands. And his first mandate is to stay alive while everyone, even his own father, tries to kill him.
He's learned to annihilate zombies and raise the dead, divination and clairvoyance, so why is learning to drive such a difficulty? But that isn't the primary skill he has to master. Survival is.
And in order to survive, his next lesson makes all the others pale in comparison. He is on the brink of becoming either the greatest hero mankind has ever known.

www.sherrilynkenyon.com for more about SHERRILYN KENYON, INFAMOUS, and all of her novels.

At fourteen, Nick Gautier thinks he knows everything about the world around him. Streetwise, tough and savvy, his quick sarcasm is the stuff of legends. . .until the night when his best friends try to kill him. Saved by a mysterious warrior who has more fighting skills than Chuck Norris, Nick is sucked into the realm of the Dark-Hunters: immortal vampire slayers who risk everything to save humanity.
Nick quickly learns that the human world is only a veil for a much larger and more dangerous one: a world where the captain of the football team is a werewolf and the girl he has a crush on goes out at night to stake the undead.
But before he can even learn the rules of this new world, his fellow students are turning into flesh eating zombies. And he's next on the menu.
As if starting high school isn't hard enough. . .now Nick has to hide his new friends from his mom, his chainsaw from the principal, and keep the zombies and the demon Simi from eating his brains, all without getting grounded or suspended. How in the world is he supposed to do that?

Thanks to Zeitghost media and St. Martin's Press I have one copy of Infinity, the first novel in the series, to give away to one US or Canadian reader! To enter, just leave a comment on this post and then fill out the RaffleCopter below with your name and email address. Additional entries are available but not required. Good luck!