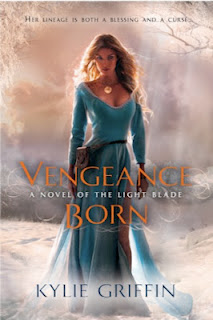 There is no mercy in the demon realm. No escape. In this place of desperation and conflict, anyone who is not pure bred is virtually powerless. Until an unlikely champion is born...


Annika, half-blood daughter of the Na'Reish King, longs for more than her tormented life among her father's people. Conceived in hatred and bred as a tool of retribution, she's gifted with a special talent that can heal as well as destroy...


With the Na'Reish vastly outnumbering them, Kalan, a Light Blade warrior, knows the future of humankind depends on him alone. Incursions into human territory and raids for blood-slaves by the Na'Reish Horde have increased. As Chosen-leader, he faces the task of stopping the demons-and convincing the Council of aging Light Blade warriors that change is necessary for survival.


When Annika learns Kalan is a prisoner in her father's dungeon, her dream of escape seems within reach. She agrees to free him in exchange for his protection once they reach human territory. Now, marked for death for helping him, Annika must learn to trust Kalan as they face not only the perilous journey to the border but enemies within the Council-and discover a shocking truth that could throw the human race into civil war..


Vengeance Born is a wonderfully written debut novel that brings prejudice and judgement to their knees. A whole new world on the brink of war is brought to life by Griffin, a successful first novel for this series.


Annika has a good soul and has fought to retain her goodness despite living in a blood drinking demon fortress where she was treated as lower than dirt. Her life growing up has made her cautious and vigilant, so it is a difficult step for her to trust Kalan and let her guard down for him.
Kalan goes through a lot of change throughout Vengeance Born. He has to overcome strong prejudices that stand in the way of him trusting Annika. In the beginning she gives him chances to trust and he does the very human thing of messing it up. Though it is Kalan who realizes his feelings first and is man enough to act on them, despite the cost. He is a wise leader for his people and learns quickly so when a group of other half-bloods show up he offers aid and ways for both side to benefit.
Throughout the first part of the book Annika and Kalan are traveling alone, but once they reach the city there are a handful of strong secondary characters that really add to the story. Kalan’s sister Kymora being one, she holds a revered position yet is humble and able to see past outer appearances. Varian who is in charge of the small group of Na’Chi, other half-bloods, has much to teach the Light Blades if he can accept their trust and Kymora’s friendship. And Arek, who is a Light Blade with even stronger prejudices than Kalan started out with. Each of these strong characters add depth to the story and we can only hope will get prominent rolls in the following books.
Griffin has started off the Light Blade series with a hit! The plot line flows smoothly, giving the characters time to adjust and realize that love knows no bounds. The end is wrapped up nicely, yet leaves enough hanging at the end to keep you coming back for book two. They say you can’t judge a book by its cover, though in this case what is inside truly is as beautiful and mesmerizing as what is on the outside.