Today I'd like to welcome the wonderful Laurie London back to Reading Between the Wines! Laurie is here with her newest Sweetblood release, Tempted by Blood, which is Jackson's story. Whoot! I know a lot of us have been waiting for this one. :) I'll let Laurie get started and then you can enter to win you're very of copy of Tempted by Blood afterwards. Enjoy!

Thanks so much, Crystal, for having me on RBtW today. It just so happens that I’m at a plotting weekend right now with several other authors and we’re drinking wine. Cheers! Tempted by Blood, the third book in the Sweetblood series, just came out in print—the digital version comes out March 1. It’s Jackson and Arianna’s story.


If you’ve read the first two books, you’ll remember Jackson. He’s the playboy, the charmer. If you ask me, I think he’s easily bored, which is why he’s always searching for something new. He’s never satisfied with the way things are. In fact, he changes girlfriends as often as he changes the highlights in his hair. 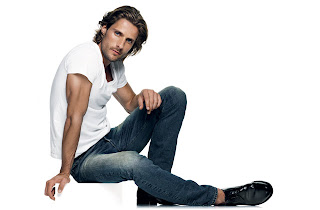 Jackson: *Removes his small David Beckham-like ponytail and shakes it out.* What’s wrong with my hair?


Me: *Blinks a few times. Forgets the point she’s trying to make.* Nothing. I like your hair. A lot.


Me: Listen, I hate to say this, but you can be kind of a coward sometimes when it comes to women. Rather than breaking up with a girlfriend, you do something that makes them break up with you. In fact that one time—


Jackson: *His pupils dilate, leaving just a ring of his iridescent green irises.* Who you calling a coward, Miss I-Pass-Out-Because-There-Might-Be-Blood-Somewhere? I heard about you in the veterinary hospital. Twice. And at the blood donation facility. What I wouldn’t give to have seen you crash into that wall in front of the reception area.


Me: We’re talking about you, not me. As I was saying—


Jackson: I can guaran-damn-tee you that I’m no coward. Far from it. *Pulls a half sandwich from pocket and stuffs it in his mouth. The colorful snake tattoo on his arm appears to be striking.*


Me: *Holds up hands as a peace offering.* Okay. Maybe coward is the wrong word. Sorry. As one of the most kick-ass Guardians in the Seattle field office, you’re far from cowardly.


Jackson: *Wipes the back of a hand over his mouth.* That’s better.


Me: How about non-confrontational then?


Jackson: You make me sound like a goddamn wimp. I can be plenty confrontational when I need to be.


Me: *Notices the tips of his fangs. Swallows nervously.* True, but what do you call it when you cheat on a girlfriend and let her catch you just to make her do the breaking up?


Jackson: *Shrugs* So? I don’t like to deal with shit like that. It gets her full buy-in that way. Besides, I’ve only done it once.


Me: That’s not what Lily said. When I was talking with her and Alfonso—


Jackson: *Stares at his ostrich skin Lucchese boots* What does Lily know?


Me: She’s one of your best friends. I’d say she knows a lot about you.


Jackson: *Scoffs* She knows nothing about me. No one does.


Me: Just you wait, Jackson. You’re going to meet someone someday who’s not going to put up with your shit. Someone who can see right through the walls you’ve erected around your heart.


Jackson: Writers. You’re all the same. Always trying to dredge up emotion and conflict for the hell of it. I’m fully aware of every single one of my faults. I don’t need some woman pointing them out. What a nightmare.


Me: Nightmare? She’s going to fall in love with the man you are inside. *Points to his broad chest* The man you forgot you were. That is, if you don’t screw up.


Jackson: *Pulls out another sandwich half and curses under his breath.* Why do you insist on making my life so painful?

Deep within the forests of the Pacific Northwest, the battle for supremacy rages on between two Vampire coalitions: Guardian enforcers sworn to protect humanity, and Darkbloods, rogues who kill like their ancient ancestors….He might be known for his effortless charm, but Guardian Jackson Foss is hiding a terrible secret. For months, he has battled the emergence of his dark nature—deadly urges that threaten to consume him. And those cravings only intensify when he meets Arianna Wells, the human he's been assigned to protect.
Smart and perceptive, Arianna doesn't seem like a dangerous temptress. Yet she awakens in Jackson an unstoppable need that, if left unchecked, will brand him a traitor…a crime punishable by death.
But soon their bond may be Arianna's only hope. For stalking her in the shadows is a merciless enemy—one who will stop at nothing to claim her completely….

Read an Except
Learn more about the Sweetblood series!
http://www.laurielondonbooks.com/
~*GIVEAWAY*~
Laurie is graciously giving away a copy of Tempted by Blood to one US or Canadian reader. To enter, just leave a comment on this post and then fill out the RaffleCopter below. Additional entries are available but not required. Good luck!